Look Me in the Eye!

What the Pupil Tells Us about Language Acquisition 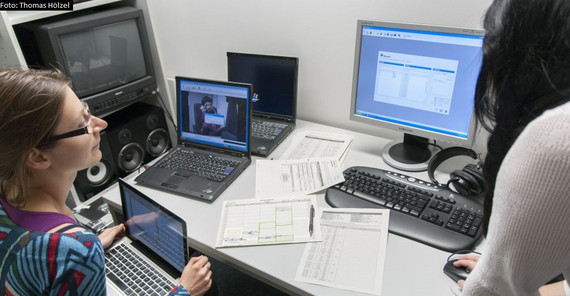 At the IDEALAB doctoral program, an international group of young academics study the relationship between language and brain. They conduct research on typical and atypical language processing and representations. Katalin Tamási, an IDEALAB student from Hungary, focuses her research on the development of early word representations.

While two-year-old Lena is making herself comfortable in her mother's lap, it does not seem to bother her that she is in the midst of an experiment at the University's Babylab. She is captivated by various objects and figures on the screen. A female voice labels each object that appears: “fish”, “sun”, “baby”, etc. Sometimes the words are slightly mispronounced: “fish” becomes “pish”, “sun” becomes “dun”, and “baby” “taby”.

As Lena watches the film, Tamási observes the child’s reactions on a monitor in an adjacent room. The 28-year-old researcher wants to find out how Lena's pupils react to words, correct and incorrect alike, when presented along with a corresponding picture. The central question Tamási asks in her thesis is what children know about words before they learn to speak. She hypothesizes that even if children cannot produce some words correctly, they are able to perceive the difference between correct and incorrect pronunciations. From her previous work with autistic children, she compares their abilities to those of young typical children, commenting that "autistic children understand much more than they let on by talking."

Tamási studies this question as part of IDEALAB (International Doctorate for Experimental Approaches to Language and Brain), funded by the Erasmus Mundus Program of the European Union since 2012. Apart from the University of Potsdam, participating universities include Trento (Italy); Groningen (Netherlands); Newcastle (Great Britain); and Macquarie University, Sydney (Australia). Among the 15 associated partners are other universities, health institutions, publishing and technology companies. At the moment, 21 PhD students from Russia, Mexico, Portugal, the Netherlands, Iran, Spain, Turkey, Ukraine, Hungary, USA, Pakistan, Italy, Serbia, China, and Germany are conducting research at IDEALAB.

Language and brain are the major foci the young academics examine from various angles. “The program addresses how language is processed by and represented in the brain,” explains Barbara Höhle, who is a professor for Psycholinguistics/Language Acquisition and coordinator of the project. Participation in the program is highly attractive for the fellows because of the methodological diversity the five universities can offer. “Moreover, the universities’ expertise is multifarious,” says Prof. Höhle. For example, Macquarie University contributes its research strength in dyslexia, while Potsdam provides its specialization in language acquisition.

The expertise offered by the University of Potsdam motivated Katalin Tamási to apply for a scholarship. In her year, eight candidates were selected from among 60 young applicants. The application procedure is demanding: “In addition to the standard requirements, applicants have to submit a detailed outline of what they want to research in their PhD project,” explains Prof. Höhle. Do they know the respective literature? Can they formulate concrete hypotheses, and do they have a clear idea of how to pursue the study of what they want to examine? These are the crucial dimensions on which the admissions committee evaluates the researchers. “We then conduct a Skype interview with the shortlisted candidates. Due to the time difference this is sometimes quite a challenge,” adds Prof. Höhle with a smile.

Katalin Tamási presented a persuasive proposal. She is particularly interested in language acquisition during the first years of life. “We still don't know exactly how words are represented in the child’s mind,” she explains. How precise are Lena’s concept of a word? Can she distinguish between “fish” and “pish”? Can she do this even though she cannot pronounce this word correctly yet? To answer these questions, Tamási is using a method that has found its way into cognitive and neurosciences in recent years. With the help of pupillometry, i.e. measuring the change in pupil diameter, researchers can make inferences about cognitive effort.

“This method has only recently been used to examine linguistic issues,” stresses Tamási. The assumption is that if Lena notices that there is something wrong with a word, the cognitive effort with which the word is mapped to the image increases, which in turn causes the pupils to widen. While watching the objects on the monitor, Lena's pupil diameter is constantly being registered and measured by a camera. In this study, the doctoral candidate tested 24 children to determine the degree of sensitivity of pupillometry. “If this method turns out to be appropriate to measure minute linguistic differences, the whole psycholinguistic community will have a new tool at its disposal,” explains Katalin Tamási. She would use such a tool herself for further and more comprehensive studies.

Tamási will not only conduct her studies at Potsdam, but also at Newcastle University, mobility being an important component of the PhD program. The doctoral candidates have the opportunity to spend at least six months at another university of the consortium in order to get acquainted with various experts of their fields and their preferred methodologies. At Newcastle, Tamási will learn about the linguistic applications of the ultrasound device, i.e. essentially the same device used for medical purposes. She is interested in capturing the tongue’s position during speaking. “We can identify whether certain inaudible movements are existent,” explains the researcher. This method may complement the existing acoustic measures in language acquisition.

IDEALAB not only places great emphasis on mobility, but also on providing collaboration opportunities. Participants meet twice every year at winter and summer schools hosted by universities to present their progress and results. The University of Potsdam hosts the summer schools, while the venue for winter schools rotates between the consortium members. Tamási regards the exchange of ideas extremely “rewarding and helpful”. “We are on the right track with the program,” confirms Prof. Höhle. The candidates are especially excited about the opportunity to visit their mobility and internship institutions. “This is a challenge, of course: relocation, visa, new contact persons – all this requires excellent organizational skills,” says the professor. On the other hand, the change offers a unique opportunity to establish networks. “This is crucial for career development.”

Lena has completed her experiment; the film has finished. Using a picture book, she is asked to produce the words she heard during the experiment. At the end, Lena can choose a little book to take home.

The PhD program “International Doctorate for Experimental Approaches to Language and Brain” (IDEALAB) investigates the relationship between language and brain since 2012.

Prof. Dr. Barbara Höhle studied linguistics, psychology, and social sciences at the Technische Universität (Berlin). Since 2004, she is a professor for Psycholinguistics/Language Acquisition at the University of Potsdam.

Katalin Tamási studied English and Theoretical Linguistics in Budapest, Hungary and Tromsø, Norway and Psychology in Boston, USA. Since September 2013, she has participated in the IDEALAB program.