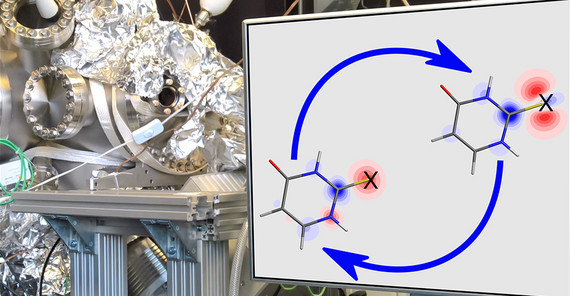 An international research team led by Markus Gühr’s group at the University of Potsdam performed laser experiments at Deutsches Elektronen-Synchrotron DESY to monitor charge motions in light-excited molecules of thiouracil, which is a modified nucleobase. This class of molecules has a variety of medical applications, including possible novel cancer therapies. Their basic research now published in Nature Communications opens up the possibility to map the charge flowing inside the molecular landscape.

Nearly all energy sources rely on the sun as the primary source. Nature is rich in efficient and economic molecular machines that harvest light energy and funnel it into changed chemical bonds, electric current, or heat. At the microscopic level, the conversion of the absorbed light into other forms of energy is accomplished by a flow of electric charge inside molecules.

The molecule under investigation thiouracil (C4H4N2OS) belongs to the class of thionucleobases. These molecules are obtained by the naturally occurring nucleobases – which encode genetic information in DNA and RNA – by replacing one or more oxygen atoms with sulfur. Thionucleobases have a wide variety of applications, such as medication that drives down the immune system after organ transplantations, and possibly also the photoinduced cancer therapy used to destroy tumor cells. The regular nucleobases dissipate quickly the energy received by UV excitation, thereby avoiding potentially mutagenic consequences. Thionucleobases irradiated with UV light instead relax to spin-excited states, leading to the formation of a reactive form of oxygen in the vicinity of the molecule.

The team exploited the sensitivity of x-ray photoelectron spectroscopy to specific atoms within a molecule to probe light-excited thiouracil on a femtosecond time scale (1 femtosecond = 10-15 s). A first ultraviolet (UV) light pulse excited thiouracil, triggering an ultrafast charge motion inside the molecule. A second delayed x-ray pulse produced by the FLASH free-electron laser ionized specific electrons strongly localized at the molecule's sulfur atom. The authors observed time-dependent changes in the energy of these photoelectrons that directly reflect the charge flow from and towards the sulfur atom.

David Picconi, a theoretical chemist in Potsdam and one of the study's corresponding authors, found the direct relation between the photoelectron energy and the charge changes. “We applied state of the art quantum chemical calculations to many different molecular structures”, he says, “and found that UV excitation decreases the electron density near the sulfur atom and consistently leads to lower energy for the photoelectrons ejected by the x-rays. This is understandable, because with less electron density the Coulomb attraction of the sulfur nucleus is stronger, a higher fraction of x-ray energy is needed for ionization, and the photoelectron is left with less energy.” This connection between local charge and photoelectron spectroscopy has already been formulated by Kai Siegbahn, Swedish Nobel laureate, for molecules without the light excitation. The authors now apply the very same concepts to the light excited state of molecules.

The experimental study illuminates the microscopic mechanism for why the thionucleobases relax to potentially harmful states. This process turned out to be rather complex. Dennis Mayer, one of the first authors of this publication, adds “Our first look at the photoelectron signal during the experiment didn't seem to be rich of detailed features”, he says, “Free-electron lasers possess a lot of fluctuations but fortunately also have diagnostics to measure them. The later correction revealed beautiful time-dependent oscillations in the photoelectron kinetic energy.” The oscillating photoelectron energy and thus the oscillating charge at the sulfur atom indicates that the molecule jumps back and forth between different electronic configurations before finally settling in the spin-excited state.

The team performed the study at the FLASH 2 free-electron laser facility of DESY in Hamburg, in an experimental hall named after Kai Siegbahn, where the Potsdam group had a unique chance to build a new instrument for this type of research together with the FLASH facility. This was enabled by a grant from the German federal ministry for education and research. Fabiano Lever, one of the paper's first authors remarks: “This was my first time taking part in such a collaborative experiment at a large facility, and I had a great time building the instrument, especially while working through the challenges of interfacing it with such a large and complicated machine as FLASH.”

The work at FLASH was accomplished by an international collaboration of scientists from Potsdam, DESY, Hamburg University and the Center for Free-Electron Laser Science, The Heidelberg Institute for Theoretical Studies, Gothenburg University, the European XFEL, and the SLAC National Accelerator Laboratory. Markus Gühr looks forward to exciting, new experiments: “Up to now, we have only been looking at the charge dynamics from the point of view of one specific atom within the molecule. Extending this to different atoms will allow us to create a complete dynamical map of the charge flowing inside the molecular landscape.”

Image: Part of the instrument used for the investigation at FLASH. The insert shows the charge density induced by ultraviolet excitation (red means less electrons, blue means more) in the molecule 2-thiouracil. The X on the structure marks the sulfur atom, where the authors investigated the charge flow using time resolved x-ray photoelectron spectroscopy. The molecule jumps for the first few 100 femtoseconds between the two electron configurations indicated. Image Credit: Rolf Treusch (DESY), David Picconi and Markus Gühr (UP)