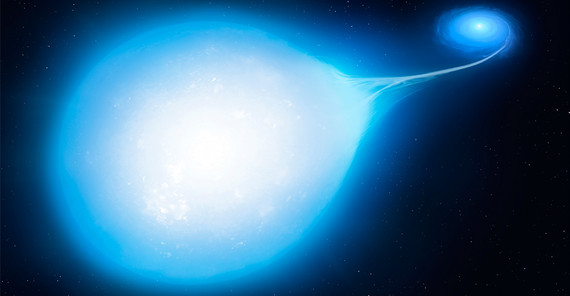 Photo : University of Warwick/Mark Garlick
Supernova progenitor
Astronomers have made the rare sighting of two stars spiralling to their doom by spotting the tell-tale signs of a teardrop-shaped star. New research published by an international team with participation of the University of Potsdam in “Nature Astronomy” confirms that the two stars are in the early stages of a spiral that will likely end in a Type Ia supernova, a type that helps astronomers determine how fast the universe is expanding. Lead author Dr. Ingrid Pelisoli was formerly affiliated with the University of Potsdam where the main results have been accomplished.

The international team of astronomers and astrophysicists led by University of Warwick made a rare sighting of a binary star system heading towards a supernova. The tragic teardrop-shape of the system is caused by a massive nearby white dwarf distorting the other star with its intense gravity, which will also be the catalyst for an eventual supernova that will consume both. It is one of only very small number of star systems that have been discovered that will one day see a white dwarf star reignite its core.

The binary star system HD265435 is located roughly 1,500 light years away and comprises a hot subdwarf star and a white dwarf star orbiting each other closely at a rate of around 100 minutes. White dwarfs are ‘dead’ stars that have burnt out all their fuel and collapsed in on themselves, making them small but extremely dense. A type Ia supernova is generally thought to occur when a white dwarf star’s core reignites, leading to a thermonuclear explosion. There are two scenarios where this can happen. In the first, the white dwarf gains enough mass to reach 1.4 times the mass of our Sun, known as the Chandrasekhar limit. HD265434 fits in the second scenario, in which the total mass of a close stellar system of multiple stars is near or above this limit. Only a handful of other star systems have been discovered so far that will reach this threshold and result in a Type Ia supernova.

Lead author Dr. Ingrid Pelisoli from the University of Warwick Department of Physics explains: “We don’t know exactly how these supernovae explode, but we know it has to happen because we see it happening elsewhere in the universe. One way is if the white dwarf accretes enough mass from the hot subdwarf, so as the two of them are orbiting each other and getting closer, matter will start to escape the hot subdwarf and fall onto the white dwarf. Another way is that because they are losing energy to gravitational wave emissions, they will get closer until they merge. Once the white dwarf gains enough mass from either method, it will go supernova.”

From 2018 to 2020 the astrophysicist Ingrid Pelisoli worked at the University of Potsdam in the research group of Prof. Stephan Geier. He is pleased with the successful observation: “The characteristic teardrop shape of this binary star system leads to an equally typical variation of its brightness. However, this variation is usually too small to be detected with ground-based telescopes. The much better sensitivity of the TESS space telescope enabled us to make this discovery.” Their research received funding from the Deutsche Forschungsgemeinschaft (DFG, German Research Foundation) and the Science and Technology Facilities Council (UK).