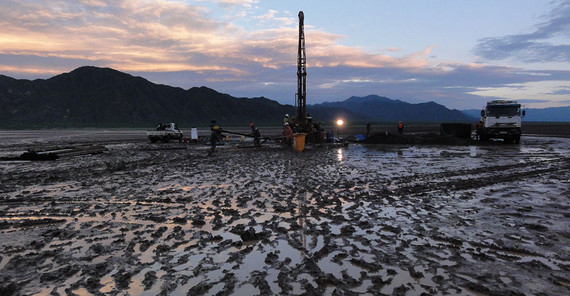 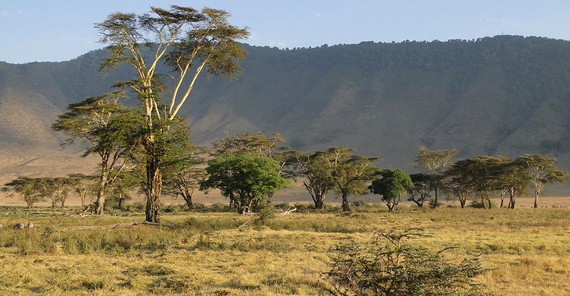 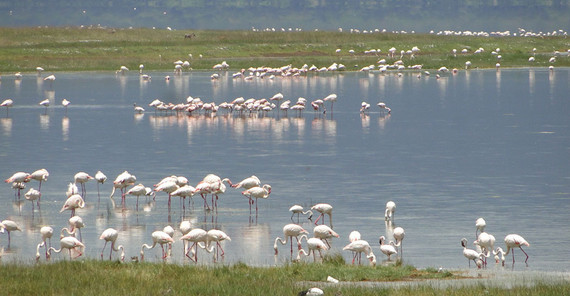 Photo : Annett Junginger
Today a saline mudflat, the Chew Bahir Basin in southern Ethiopia once held an extensive paleo-lake during humid phases. Scientific deep drilling from the current playa surface produced a ~620,000-year long sedimentary record providing insights into the intense shifts of eastern Africa’s highly variable hydroclimate.
Photo : Martin Trauth
The Ngorongoro on the edge of the Serengeti in Tanzania is home to abundant wildlife. Climate change, however, leads to dramatic water scarcity, vegetation changes, loss of biodiversity and recurring diseases that threaten the fragile ecosystem.
Photo : Martin Trauth
The alkaline Nakuru Lake in Kenya is rich in the cyanobacterium Spirulina platensis, the basic food of the Lesser Flamingo. However, due to increasing rainfall in the region in recent years, the bacterium and with it the flamingos are disappearing.
A scientific consortium led by Dr Stefanie Kaboth-Bahr of the University of Potsdam has found that ancient El Niño-like weather patterns were the primary drivers of environmental change in sub-Saharan Africa over the last 620 thousand years – the critical timeframe for the evolution of our species. The group found that these ancient weather patterns had more profound impacts in sub-Saharan Africa than glacial-interglacial cycles more commonly linked to human evolution.

While it is widely accepted that climate change drove the evolution of our species in Africa, the exact character of that climate change and its impacts are not well understood. Glacial-interglacial cycles strongly impact patterns of climate change in many parts of the world, and were also assumed to regulate environmental changes in Africa during the critical period of human evolution over the last ~1 million years. The ecosystem changes driven by these glacial cycles are thought to have stimulated the evolution and dispersal of early humans.

A paper published in Proceedings of the National Academy of Sciences of the United States of America (PNAS) this week challenges this view. Dr Kaboth-Bahr and an international group of multidisciplinary collaborators identified ancient El Niño-like weather patterns as the drivers of major climate changes in Africa. This allowed the group to re-evaluate the existing climatic framework of human evolution.

Walking with the rain

Dr. Kaboth-Bahr and her colleagues integrated 11 climate archives from all across Africa covering the past 620 thousand years to generate a comprehensive spatial picture of when and where wet or dry conditions prevailed over the continent. “We were surprised to find a distinct climatic east-west ‘seesaw’ very akin to the pattern produced by the weather phenomena of El Niño, that today profoundly influences precipitation distribution in Africa,” explains Dr Kaboth-Bahr, who led the study.
The authors infer that the effects of the tropical Pacific Ocean on the so-called “Walker Circulation” – a belt of convection cells along the equator that impact the rainfall and aridity of the tropics - were the prime driver of this climate seesaw. The data clearly shows that the wet and dry regions shifted between the east and west of the African continent on timescales of approximately 100,000 years, with each of the climatic shifts being accompanied by major turnovers in flora and mammal fauna.
“This alternation between dry and wet periods appeared to have governed the dispersion and evolution of vegetation as well as mammals in eastern and western Africa,” explains Dr Kaboth-Bahr. “The resultant environmental patchwork was likely to have been a critical component of human evolution and early demography as well.”

The scientists are keen to point that although climate change was certainly not the sole factor driving early human evolution, the new study nevertheless provides a novel perspective on the tight link between environmental fluctuations and the origin of our early ancestors.
“Re-evaluating these patterns of stasis, change and extinction through a new climatic framework will yield new insights into the deep human past,” says Dr Kaboth Bahr. “This does not mean that people were helpless in the face of climatic changes, but shifting habitat availability would certainly have impacted patterns of demography, and ultimately the genetic exchanges that underpin human evolution.”

Images:
nakuru_Martin Trauth.jpg: The alkaline Nakuru Lake in Kenya is rich in the cyanobacterium Spirulina platensis, the basic food of the Lesser Flamingo. However, due to increasing rainfall in the region in recent years, the bacterium and with it the flamingos are disappearing. Image Credit: Martin Trauth.

ngorongoro_Martin Trauth.jpg: The Ngorongoro on the edge of the Serengeti in Tanzania is home to abundant wildlife. Climate change, however, leads to dramatic water scarcity, vegetation changes, loss of biodiversity and recurring diseases that threaten the fragile ecosystem. Image Credit: Martin Trauth