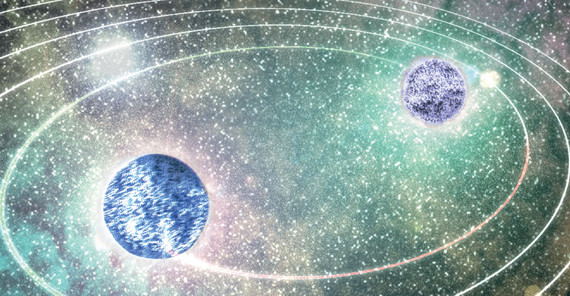 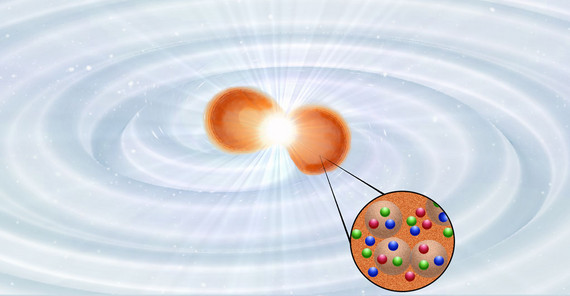 Photo : Niclas Moldenhauer
Artistic representation of two inspiralling neutron stars shortly before their collision. | Image credit: N. Moldenhauer
Photo : Tim Dietrich
Collision of two neutron stars showing the electromagnetic and gravitational-wave emission released during the merger process. The combined interpretation of multiple messengers allows it to understand the internal composition of neutron stars and to reveal the properties of matter under the most extreme conditions in our Universe. | Image credit: Tim Dietrich
Combining various observational data of neutron-star collisions with nuclear-physics calculations, Tim Dietrich, Astrophysics Professor at the University of Potsdam, and an international science team made a breakthrough in constraining the size of a typical neutron star and in measuring the expansion rate of our Universe, determined by the Hubble constant. Their results have now been published in the high-ranking journal Science.

In modern astrophysics, scientists combine different types of signals from space, in particular light, cosmic particles, and gravitational waves, to answer fundamental questions of cosmic history. This method of multi-messenger astronomy is a rapidly growing field, where the cosmic messengers in the electromagnetic spectrum of light encompass, e.g., gamma rays, ultraviolet, visible, infrared, and radio. Messenger particles can be electrons, protons, neutrinos, complex atomic nuclei and other. Finally, gravitational waves are tiny ripples in the fabric of space-time itself, generated by accelerated masses as neutron stars or black holes, that emerge from dying stars after the end of their lives.  Especially from colliding neutron stars, astronomers can depict the properties of matter at very high densities exceeding the density inside atomic nuclei, i.e., matter for which a single teaspoon of material would weight inconceivable several million tons. Colliding neutron stars produce most of the heavy elements in the periodic table, and they allow for measuring the expansion rate of our Universe.

To unravel the mysteries of the underlying physical processes during neutron star collisions, researchers from Germany, the Netherlands, Sweden, France, and the USA incorporated observations of neutron-star collisions with signals both across the full electromagnetic spectrum and in gravitational waves. “We developed an interdisciplinary framework combining the observations with theoretical nuclear-physics calculations to extract astrophysical information on these systems and matter under extreme conditions. With our method, we were able to constrain the size of a typical neutron star to be ~12 km, i.e., a neutron star is an object with the size of a single city, but with a mass several hundred thousand times the mass of the Earth”, says Tim Dietrich, Professor for Theoretical Astrophysics at the Institute of Physics and Astronomy. Further, the team used the extracted astrophysical information to determine the Hubble constant, a fundamental constant that describes the expansion of the Universe. “In the last few years, the scientific community tried to resolve tension among different determinations of the expansion rate of our Universe. Our new framework allowed us to re-measure the Hubble constant, and the final results show a mild preference for the previous Cosmic Microwave Background measurement,” adds Ingo Tews, staff scientist at Los Alamos National Laboratory and co-author of the study.
Starting from theoretical input that describes the nuclear matter in the core of neutron stars, the researchers analyzed astronomical data in a multi-step procedure. “We included neutron-star mass measurements through radio observations, the observation of a rapidly spinning neutron star, and observations of neutron star mergers via gravitational waves and electromagnetic signatures”, Tim Dietrich explains the methods, “for the latter, we scanned the entire frequency spectrum ranging from the radio band to gamma-rays.” The developed framework is general and can easily be extended to include an increasing number of detections of multi-messenger signals in the coming years, he summarizes.

Science_Dietrich: Collision of two neutron stars showing the electromagnetic and gravitational-wave emission released during the merger process. The combined interpretation of multiple messengers allows it to understand the internal composition of neutron stars and to reveal the properties of matter under the most extreme conditions in our Universe. Image credit: Tim Dietrich