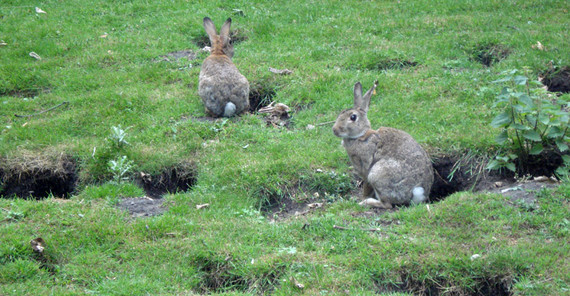 Photo : S. Kriesten
Rabbit
It is not only humans that drift to the cities, but also wild animals. Researchers have now succeeded in proving that wild rabbits have migrated from rural areas to the city center of Frankfurt and continue to do so. At the same time, they discovered that city-dwelling rabbits are more genetically diverse than their rural counterparts. The results of their study on population genetics of urban and rural rabbit populations, which was analyzed at the University of Potsdam, has now been published in the journal “Scientific Reports” by the team led by Dr. Madlen Ziege.

It is clear why we as humans are drawn to the cities: We find important resources there, which are rarer in rural areas. European rabbits (Oryctolagus cuniculus) seem to be no different, as Dr. Madlen Ziege explains: “Wild rabbits reach high population densities where they find enough food and can build burrows in the near vicinity.” These conditions are ever more likely to exist in big cities like Frankfurt on the Main than in the structurally impoverished agricultural areas of the rural surrounding area.

Urban rabbit populations also show less inbreeding than their rural counterparts, which means they have a higher genetic diversity. “This is due to the fact that population density is higher in the city and that rabbits can mingle a lot better despite barriers like streets. The few rural rabbit colonies live a lot farther apart. This leads to more inbreeding among the rural populations and, finally, to a migration into the cities,” Madlen Ziege says. These results show once more that cities will play an important role as habitats for wild animals in the future.