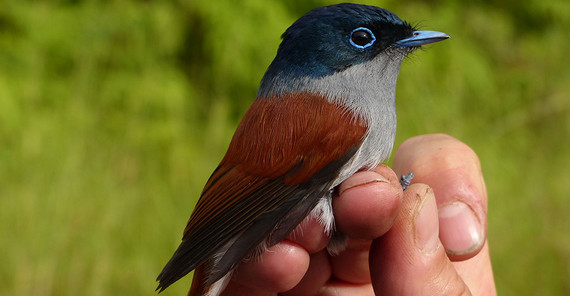 Photo : Christophe Thebaud
Mascarene paradise flycatcher
Biologists from the University of Potsdam are part of an international research team which succeeded in developing a model to explain the species diversity of birds on islands worldwide. Their study based on molecular data of hundreds of bird species from 41 oceanic archipelagos worldwide shows: The key to their species diversity lies in the size and the (isolated) location of islands. With this, the study makes an important contribution to the decoding of the basic processes that are responsible for the emergence of global biodiversity. The results have now been published in the research journal “Nature”.

Species diversity is distributed unevenly on our planet. Why are some islands like the Galapagos Islands or Hawaii home to so many unique bird species? Scientists Robert H. MacArthur and Edward O. Wilson published a hypothesis in 1967, according to which an island’s size and distance to the mainland are of crucial importance for its colonization. According to this, species diversity could be determined as a function of these two factors. They speculated that an equilibrium between migration on the one hand and extinction on the other hand would establish itself over time. Migrated species can also undergo evolutionary changes and split into new species. Even though the authors were aware of the significance of these evolutionary processes, they were not able to incorporate them into their model, which is why its dynamic was only defined by colonization and extinction rates.

A team of ornithologists, evolutionary biologists and mathematicians led by Dr. Luis Valente and including Prof. Dr. Ralph Tiedemann and Katja Havenstein of the University of Potsdam has now successfully illustrated, for the first time, how the size of islands and their distance to the mainland influence species diversity in island bird populations. On the basis of a global dataset on island birds from oceanic islands worldwide, they were able to verify three basic correlations: The colonization rate will decrease, the more isolated the island while the extinction rate will decrease, the bigger the island. At the same time, more species will develop on bigger and more isolated islands than on small islands that are close to the mainland.

“These results match intuitive expectations. However, until today, scientists lacked the necessary observation data and statistical methods to verify this theory on a global level,” says evolutionary biologist Ralph Tiedemann from the University of Potsdam, who conducted a study in which Valente participated from 2016 to 2018 as a Humboldt fellow and winner of the Brandenburg Prize for Junior Researchers. In Potsdam’s evolutionary biology laboratory, molecular data from hundreds of island brid species was gathered, which had been collected over the years from field expeditions to dozens of isolated oceanic islands. A new model utilizes this data to predict species diversity. It calculates migration, extinction and speciation rates on the basis of actual songbirds and their genetic relation on almost all oceanic islands worldwide, including well-known archipelagos like Galapagos, Hawaii, Azores, Canaries and Mauritius.

The study also presented another fascinating result: So far, islands have been known for their spectacular evolutionary splitting into various species – as is the case with Darwin’s finches on Galapagos, where 15 species have developed from one single species over time. The researchers led by Luis Valente have now found that this form of speciation rarely occurs on remote islands. On most islands, bird species are not directly related, but are descendants of migrated birds with their closest relatives on the mainland.

Overall, the study offers valuable insights into the development and loss of biodiversity under natural cicumstances, i.e. without human interference.