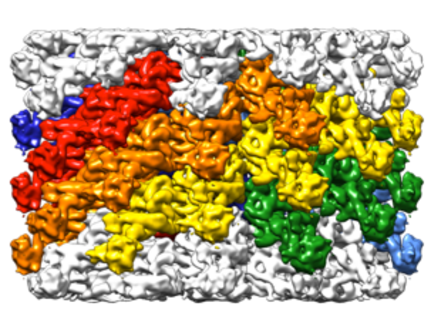 Recently, we have resolved the three-dimensional structure of the contracted Vibrio cholera type VI secretion system tubule to 6 Å. The bacterial type VI secretion system is a multicomponent molecular machine directed against eukaryotic host cells and competing bacteria. It consists of a contractile tubule that is attached to a membrane protein complex. Upon tubule contraction, a needle is ejected into target cells and toxic effectors are translocated into the cell. The AAA+ ATPase ClpV plays an important role in the secretion process, as it disassembles the contracted tubule, putatively for recycling of the complex.

In order to understand the molecular mechanism of tubule contraction and substrate recognition by ClpV we investigated the structure of the Vibrio cholera type VI secretion tubule consisting of the proteins VipA and VipB. We employed a hybrid methods approach of cryo electron microscopic 3D reconstruction and biochemical labeling techniques supported by cross-linking mass spectrometry to develop a structural model of VipA and VipB in the tubule. We describe the arrangement of VipA and VipB in the asymmetric unit and show that the architecture of the tubule is mainly defined by contacts between C-terminal domains of VipB which are structurally similar to domain IV of viral tail sheath proteins. By comparison to the T4 bacteriophage tail sheath, we suggest that these structurally homologous parts mediate the common function of contraction. Additionally, the VipA/B tubule has been adapted towards efficient recycling of contracted Type VI secretion systems.

Institute of Biochemistry and Biology