DNA origami nanostructures are a versatile tool that can be used to arrange functionalities with high local control to study molecular processes at a single-molecule level. They can be used to suppress the formation of specific guanine (G) quadruplex structures from telomeric DNA. The folding of telomeres into G-quadruplex structures in the presence of monovalent cations (e.g. Na+ and K+) is currently used for the detection of K+ ions, however, with insufficient selectivity towards Na+. By means of FRET between two suitable dyes attached to the 3'- and 5'-ends of telomeric DNA we demonstrate that the formation of G-quadruplexes on DNA origami templates in the presence of sodium ions is suppressed due to steric hindrance. Hence, telomeric DNA attached to DNA origami structures represents a highly sensitive and selective detection tool for potassium ions even in the presence of high concentrations of sodium ions. 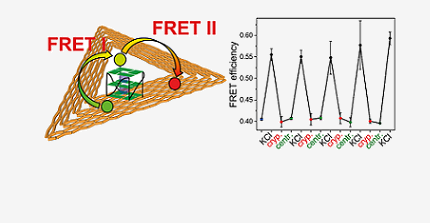 The folding of single-stranded telomeric DNA into guanine (G) quadruplexes is a conformational change that plays a major role in sensing and drug targeting. The telomeric DNA can be placed on DNA origami nanostructures to make the folding process extremely selective for K+ ions even in the presence of high Na+ concentrations. Here, we demonstrate that the K+-selective G-quadruplex formation is reversible when using a cryptand to remove K+ from the G-quadruplex. We present a full characterization of the reversible switching between single-stranded telomeric DNA and G-quadruplex structures using Förster resonance energy transfer (FRET) between the dyes fluorescein (FAM) and cyanine3 (Cy3). When attached to the DNA origami platform, the G-quadruplex switch can be incorporated into more complex photonic networks, which is demonstrated for a three-color and a four-color FRET cascade from FAM over Cy3 and Cy5 to IRDye700 with G-quadruplex-Cy3 acting as a switchable transmitter.