To the left or to the right? – Geneticist Prof. Michael Lenhard investigates how plants can tell left from right 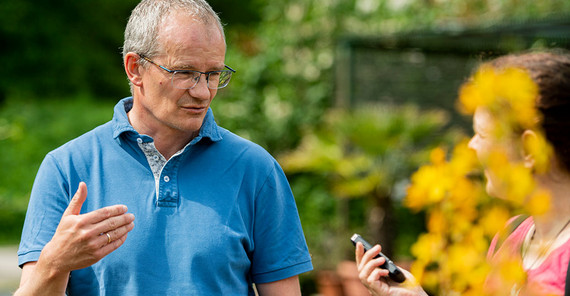 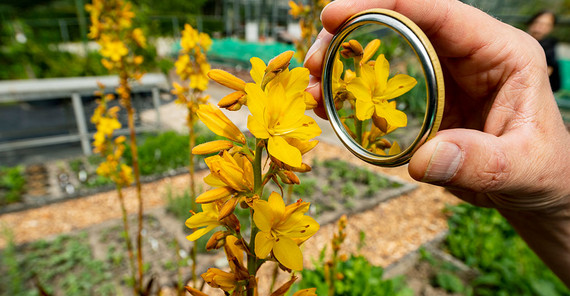 In the course of evolution, plants have developed various strategies to prevent self-pollination. The marsh butterfly lily, which originates from South Africa, has developed a special strategy that has so far only been observed in three genera worldwide: Half of all individual plants have the style of the flower bent to the right, the other half to the left. Prof. Michael Lenhard researches the genetic and molecular foundations of this phenomenon.

He knows exactly where to find these plants. Even from a distance, the tall, yellow flower heads of Wachendorfia thyrsiflora shine brightly behind the Botanic Garden’s greenhouses. Here, on the test grounds, the marsh butterfly lily grows together with thousands of other species for conservation, propagation, and research. Having arrived at the right experimental bed, Prof. Lenhard scrutinizes the flowers. His trained eye immediately recognizes the characteristics he is looking for. The marsh butterfly lily, whose flower shape is indeed somewhat reminiscent of a butterfly, has three stamens and a style, at the end of which sits the stigma. For Lenhard, how these flower organs are arranged is the most interesting part: In some plants, two stamens of the flower are bent to the left and another together with the style to the right. In others, it is the other way around. The technical biological term for this is “mirror symmetry”.

The marsh butterfly lily strictly differentiates between left and right

For the bees that buzz around the bright yellow flowers in the warm May sun and crawl inside to get nectar and pollen, this subtle difference is of no importance. They don’t care whether they visit a flower with a style bent to the right or to the left. But the plant – as Lenhard’s team suspects – pursues a specific purpose with this left-right strategy: it wants to prevent self-fertilization so as not to lose genetic diversity. The pollen should therefore not land on its own stigma, but on the stigma of the flower of another plant. The spatial arrangement of stamen and style is intended to promote cross-pollination.

It is also known from other plant species that the styles are curved differently from flower to flower. There are usually mixed flowers on one plant, as in the African violet. However, the fact that the marsh butterfly lilies have their styles bent strictly either exclusively to the left or to the right on one plant is a special feature, Lenhard emphasizes. “We only know this from a total of three genera – two from South Africa and one from North America.” In these three genera, this flower characteristic is therefore genetically determined and can thus be studied well.

That’s exactly what Lenhard and researchers from South Africa, Canada, and the Netherlands have in mind. The team wants to find out how the plant regulates on the genetic and molecular level to which side the stamens and styles bend. How did the mechanism develop evolutionarily? Which genes and proteins are involved? What happens in the cell walls to cause the bending? And what ecological significance does this subtle difference in flower architecture ultimately have for the plant species?

Which genes are responsible for the differences?

A closer look at the genes is now meant to reveal where the genetic material of left- and right-styled plants differs. In this way the researchers will be able to determine which genes are responsible for the differences. In addition, an analysis of RNA in young styles should reveal which genes are active during the decisive stage of development when the flower organs turn one way or the other. “How does the plant manage to distinguish between left and right? That is a fascinating question because the plant cannot refer to stable differences in the environment, such as with or against gravity but only to its internal reference system,” Lenhard says.

To find an answer, the researchers will genetically analyze hundreds of plants and also examine some under a microscope to clarify the cellular microstructures responsible for the bends. In addition, a biophysicist from the Netherlands will simulate the bending of the styles on the computer to help identify the responsible structures and understand the mechanism. In addition, a team in South Africa will conduct elaborate field experiments in natural habitats of the plant. To do this, the three stamens of a plant will be marked with three different fluorescent dyes. The pollinating insects carry these from plant to plant, thus creating a pollen trail for each stamen. The researchers can then trace and analyze these pollen tracks.

“In nature, about 50% of all plants are right-styled and 50% are left-styled,” Lenhard explains. “These figures indicate that the system functions quite stably to promote outcrossing between the two forms.” In the natural range of the marsh butterfly lily, large carpenter bees are primarily responsible for pollination. When the impressive insects, which can become almost three centimeters long, approach a flower, pollen sticks to the undersides of their wings. The side with two stamens gets more pollen than the other side. If the bee flies to the next plant and its flower has the exact opposite structure, there is a high probability of successful pollen transfer. In smaller insects such as the honey bee, however, this mechanism seems to work less well: In them, the pollen grains from the different stamens tend to mix more often. Now the researchers want to test whether in places with many honey bees pollination is more likely to occur within left-styled or right-styled plants and how this affects their progeny.

Lenhard plans to spend three to four years on his research. During this time he would also like to investigate the other two genera in which this strict form of mirror symmetry occurs. The fact that Wachendorfia thyrsiflora, from one of these three particular genera, was already being cultivated in the Botanical Garden of the University of Potsdam made his research possible in the first place. “That was a stroke of luck for us,” he emphasizes. He is also happy about the four-country cooperation that has been established and the opportunity to study the marsh butterfly lily in its natural habitats in South Africa.

Research on the left-right asymmetric flowers of Wachendorfia thyrsiflora is funded by a research grant from the International Human Frontier Science Program Organization. The program enables cross-national, intercontinental research collaborations, in this case between teams from Germany, Canada, South Africa, and the Netherlands.

Prof. Dr. Michael Lenhard studied biology in Munich and Oxford. Since 2010, he has been Professor for Genetics at the University of Potsdam.
Mail: michael.lenharduuni-potsdampde