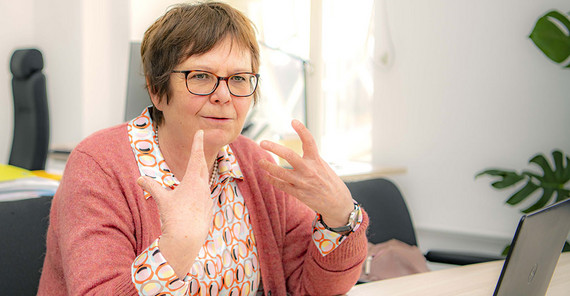 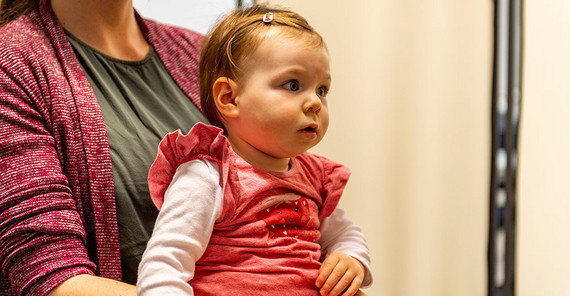 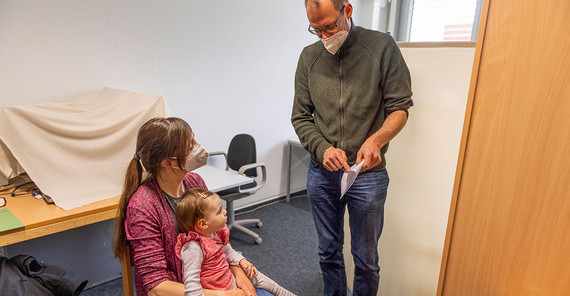 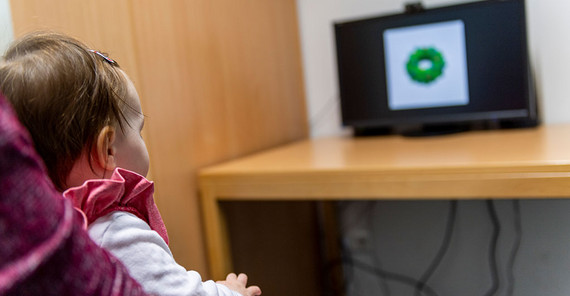 Little Mathilde is the star of the day: Laboratory coordinator Tom Fritzsche welcomes her and her mother.  Afterwards, Dr. Alan Langus, a member of the research group, takes them to the children’s waiting room where they have some time to rest. The photographer prepares his camera and takes some test shots. A flash lights up the room. Mathilde’s mom helps her 14-month-old daughter out of her overalls and fixes her hair. Four adults, a babble of voices. All speaking differently – with their own unique phonetic characteristics. Sentences, words, sounds are buzzing around Mathilde. Aroused and curious, she looks around, unaware that she is giving her afternoon for the good of science.

Today, Mathilde is a test subject and thus contributes to the research of the BabyLAB on the Golm Campus. For over 20 years, the lab has been conducting experiments to investigate children’s language acquisition. In their current project, the group led by Prof. Dr. Barbara Höhle investigates the influence of language variability on word acquisition in infants. “One might think understanding language is easy. But for children, it’s a very different story,” Höhle says. Experiments for projects of the Collaborative Research Center “Limits of Variability in Language” are regularly conducted here.

For Mathilde and her mom, it is not the first and certainly not the last visit to the BabyLAB. They already know the lab environment very well: the poster in the corridor with all team members smiling, the waiting room with a playing rug, the funny paper giraffe and birds on the door and, of course, the room where the experiments take place. Just last week they participated in another study. The young mother enjoys supporting the language lab with her child. “On the way here, we met an acquaintance of mine who had recently become a mom herself. Immediately, I ‘advertised’ for the BabyLAB,” says Mathilde’s mother, who is a graduate of the University of Potsdam. While mother and daughter are getting ready, Fritzsche briefly explains the experiment without giving away too much.

Later in the corridor, Langus explains: “We don’t want to influence parents in any way. That’s why ‘explanations’ of the experiments are only given afterwards.” Parents who live in Potsdam have often heard of the Golm BabyLAB – as soon as a baby is born, the BabyLAB sends them a letter. And the lab is well received in the city. As a result, new test subjects are rolling in constantly and provide the team with data for their research. Langus will evaluate the data later with the team. As a rule, an experiment does not last longer than ten minutes. “If a child becomes restless or starts to cry, we will stop the experiment, of course,” Langus underlines.

All set? In the experimental room, chairs, a table and a monitor are ready. Mathilde sits down on her mother’s lap. In addition to a FFP2 mask, her mother now has to wear glasses with patches on them, so that she cannot see anything and won’t influence Mathilde. Fritzsche goes to a computer hidden behind a screen. From there he watches the experiment, which is also captured on video for later reference. Initially, before the first sound is played, Mathilde is fascinated by her mom’s new accessory, which means that now not only her mouth and nose are covered, but her eyes as well! But as soon as the first sound is heard, Mathilde looks at the screen and listens attentively. The first part of the experiment begins.

“Buk, buk, buk…,” different female and male voices alternate. It’s always the same word, yet it sounds very different. Then a bright red object appears on the monitor. A vase with holes, perhaps, shown from different angles. Little Mathilde gazes at it spellbound and watches the unusual “TV program”. And suddenly it goes “puk, puk, puk…”. The new word differs only slightly from the one heard before. “Puk” comes with a new object resembling a green donut with colorful cube-shaped sprinkles. Fritzsche watches Mathilde through the camera and releases the pressed key whenever her attention decreases. The voices sometimes sound high-pitched, sometimes short, then elongated, or sonorous. Hard work for Mathilde’s ears and brain.

Infants find it particularly difficult to make out minimal phonetic differences. “Buk” and “puk” are similar, except for the first sound: However, when pronouncing the consonants b and p, you will find that your lips actually move in much the same way. The only difference is the voicing, i.e. the point at which the vocal cords start to vibrate when the sound is produced. In this experiment, the researchers use this tricky listening task. “In the first part, called the learning or the habituation phase, we measure how long the children look at the monitor. This phase is stopped when the children’s attention drops below a certain level,” Höhle explains. A drop in attention indicates that the children have grasped the connection between the image and the word. However, this part of the word learning experiment is just the preparation for the ensuing second phase.

“Puk, puk, puk…”. Oops, what’s that? Now the sound comes with the red object and not the “green donut”. That’s strange! Mathilde looks at the object longer than before. Laboratory manager Fritzsche takes the time by pressing a button. “Whether the child looks at the object longer will only be established later on the basis of the recorded time,” Fritzsche explains. “Usually, I don’t know what’s being shown, so I’m just as ‘blind’ as the parents.” In this test experiment, however, he immediately sees that Mathilde reacted exactly as anticipated.

While in phase one it was clear which object was “puk” and which one “buk”, Mathilde’s longer attention span now indicates that the incorrect assignment surprises her. And this is what the researchers are most interested in. Höhle explains: “The second phase is the actual experiment: In one run, the child hears the same combination of image and word as in the learning phase. In the next run, the combination is mixed up. In this way, we test what the child has learned in the first phase.”

“Mathilde did a great job,” Fritzsche says and shows another experiment from the same study. Again, the test subjects are shown fantasy objects while hearing “buk” and “puk”. But this time, the words are spoken by a female voice only, so the sound is less varied. The results indicate that the children do not pay attention for as long when a word comes with the “wrong” object.

“In the experiment with one female voice only, it is more difficult for the children to grasp the subtle phonetic variations,” Höhle says. To be able to distinguish between B and P – voiced and voiceless consonants – three features come into play: the time between opening the lips and the point at which the vocal cords start to vibrate, but also the so-called formants, i.e. concentrated acoustic energy released when certain sounds are spoken. People articulate syllables differently, and yet listeners are able to tell a B from a P when they hear them. Why this is so, researchers have found out with the help of another project: If one characteristic deviates from the typical values, it will be compensated by the other two. “In the current project, we are interested in the relations between these characteristics. We assume them to be stable. For us, this also explains why a variety of speakers helps. It makes children aware of relations between the different characteristics,” Höhle states. In this way, children learn to analyze the variable pronunciation while listening, and to clearly distinguish between sounds despite acoustic variation. The experiments in this research have demonstrated that Mathilde and the other children remembered the made-up words better when presented by different speakers. Höhle can well imagine that these findings could also be used in speech therapy one day.

At the end, Fritzsche explains the experiment in detail. There is some paperwork to do, and Mathilde’s mother signs a document confirming the receipt of her compensation from the BabyLAB. After the little test subject is allowed to “sign” as well, on an empty sheet of paper, she is handed over a little present for her cooperation: a white T-shirt with “junior professor” printed on it in blue letters. This is how Fritzsche thanks the two for coming. To be a junior professor of language acquisition one day, if only one could tell at the age of 14 months...

Project “C03: Effects of variable input on word learning and word recognition in infants” is part of the Collaborative Research Center (SFB) 1287 “Limits of Variability in Language”.

Prof. Dr. Barbara Höhle studied linguistics, psychology and social sciences at Technische Universität Berlin. She has been Professor of Psycholinguistics at the University of Potsdam since 2004. In January 2021, she took over the office of Vice President for Research, Early Career Researchers and Equal Opportunities.
Mail: barbara.hoehleuuni-potsdampde

Born in Estonia, Dr. Alan Langus studied cognitive science and psychology in Bremen and Amsterdam. He has been a research assistant at the Department of Linguistics at the University of Potsdam since July 2016.
Mail: alan.langusuuni-potsdampde

Tom Fritzsche is laboratory coordinator of the BabyLAB on the Golm Campus.
Mail: tom.fritzscheuuni-potsdampde