AlterEco – Tracing the Ecological Footprint of the Neanderthal 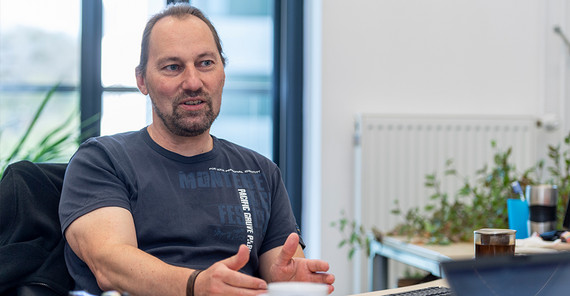 Humans live large. The rainforest, which is so important for the world, is dwindling, as are the polar caps and the permafrost. The goal, agreed upon in Paris only in 2015, of limiting global warming to 1.5 degrees by 2100 is becoming increasingly unrealistic. Scientific studies from a wide range of disciplines reveal every day just how large our ecological footprint really is. It is less well known that humans have been making serious and lasting changes to their environment not just since industrialization. A research project, of which the Potsdam expert on ancient DNA, Prof. Michael Hofreiter, is a part, aims to show how much the Neanderthals already affected the flora and fauna around them.

So, does the history of the Earth need to be rewritten? Did the Anthropocene – the age of humans – begin much earlier than previously thought? Not for Prof. Hofreiter. “It’s distinctly anthropocentric that we need our own Earth epoch,” he says and laughs. “I think it’s quite possible that in 5-10 million years there will hardly be any traces of human existence left on Earth.” However, if the research project is able to demonstrate that Neanderthals were already permanently changing their environment, it would nevertheless be scientifically remarkable. “The oldest evidence to date that humans used fire to change the landscape on a large scale comes from Australia and is about 50,000 to 60,000 years old,” he explains. “In the Neumark region, we are now investigating finds that are over 120,000 years old.”

In collaboration with the Archaeological Research Center and Museum for Human Behavioral Evolution in Neuwied (MONREPOS) and the universities in Mainz and Leiden, Hofreiter investigates traces of human influence on nature. Did Neanderthals change the biological diversity of the flora and fauna? Until now, it was assumed that humans began to have a lasting impact on the face of nature only when they settled down and cleared forests, created towns, and cultivated fields. The AlterEco team is of a different opinion: In their project outline, the researchers write “that human intervention in the landscape has a much greater temporal depth, and prehistoric hunter-gatherers were already changing their niches tens of thousands of years before the advent of agriculture, with significant impacts on ecosystems.”

In order to prove this, the researchers are studying the traces of plant and animal life during the Eemian, an interglacial period that began about 126,000 years ago and lasted about 11,000 years. These are preserved in a former lignite opencast mine in Saxony- Anhalt near Halle/Saale. “The Neumark-Nord site is unique,” says Hofreiter. “On the one hand, the special geology has ensured that the remains of animals, plants, and traces of human influence have been very well preserved. There was an ice cap on top of the lignite for a long time. In addition, there were sandy sediments, which are less harmful to the DNA we are studying than, for example, acidic sediments.” Moreover, he says, it was only the extensive opening of the area by opencast mining that exposed those layers in which the prehistoric remains have survived for more than a hundred thousand years, allowing the researchers to study them today. “Fortunately for us, archaeologist Dietrich Mania already secured many finds during lignite mining.” The two lake basins Neumark-Nord 1 and Neumark-Nord 2 (NN1 and NN2) are now being opened up on a large scale – tens of thousands of plant and animal remains have been secured so far on a total of nearly 26 hectares. Among them are more than 200 animal species: from beetles to rudd and pike to hyenas, rhinos, and cave lions. Over 1,500 skeletal parts of about 70 European forest elephants were collected on NN1 alone. “These were huge animals with a shoulder height of up to four meters and a weight of 13 tons,” says Prof. Hofreiter. Amongst them, traces of their human hunters emerge again and again: flint knives, tools for scraping and charcoal remains that indicate fire. Bones or skeletons of Neanderthals themselves, however, were not found.

The interdisciplinary research team has set out to investigate the finds with the help of various new methods: Prof. Tütken, a geoscientist from the University of Mainz, is looking at the food webs between herbivores and carnivores by analyzing stable isotopes. The bones of lions, bears, wolves, deer, rhinoceroses, and elephants, for example, are examined to determine to what extent stable compounds of carbon, nitrogen, and other elements have been preserved in them. This allows conclusions to be drawn about the animals’ food, which in turn enables the reconstruction of food networks.

Prof. Roebroeks, an archeologist at Leiden University, will analyze the many scorch marks among the finds in Neumark-Nord. Did Neanderthals use fire, for example, to keep the area, which was completely covered by forest for a long time, open so that they could hunt better?

Prof. Gaudzinski-Windheuser and Dr. Kindler from MONREPOS are particularly interested in the fauna and elephant finds. “All excavated elephant bones have cut marks, which suggests that they were hunted,” explains Hofreiter. The archaeozoological analysis of bone changes caused by humans and predators provides, among other details, information about the size of the populations that lived in the area.

Michael Hofreiter is also taken with the large animals. He looks at the bones of aurochs, red and fallow deer, and elephants. Carnivores, on the other hand, are left out. “Since they are at the top of the food pyramid, we simply haven’t found enough of their remains for a genetic analysis,” he explains. With elephants, things are different. Hofreiter and his team have already collected samples from 40 animals. The deer bones, which are located at MONREPOS near Frankfurt, will be sampled soon. “Then it’s time to put on a work coat and gloves, and a mask and get to the bones - with a Dremel,” he explains. Of course, this is done in close coordination with the responsible archaeologists and curators so that the bones can still be exhibited later. Experience shows that the best-preserved ancient DNA is found in the thick bones. The better the sample, the more information you can extract from it later in the lab, Hofreiter says. “We don’t need much,” he says. “For one extraction, 50 milligrams are enough.”

In the Potsdam laboratory, existing DNA residues are extracted and examined more closely – in large quantities. Next Generation Sequencing (NGS) is the name of the procedure that has revolutionized work with genetic material. In the laboratory of Hofreiter’s research group, there is a black box that looks like a standard laser printer: a small sequencer. It “only” manages about 400 million sequences in one cycle. That’s enough to keep the researchers busy for weeks. Their work consists primarily of analyzing the data bioinformatically. “With NGS, we can sequence enormous amounts of DNA,” Hofreiter says. “The method is also very well suited for ancient DNA, since it can also be used to analyze the often very short sections that have been preserved.” From the individual analyses, Hofreiter and his team create a DNA library that they can use to compare animals. “For a population genetic comparison, we need the same DNA section from all individuals,” he explains. The comparison is expected to provide answers to many questions: What were the dynamics of the populations? Was there an exchange or did they live “side by side”? Did genetic diversity decline because the animals were heavily hunted? “If we find enough genetic material, we can create a genome for each species,” Hofreiter says. “Then we would be able to work out the long-term population dynamics, i.e. how large the populations were at what times.”

In the end, the results of all subprojects will be combined. To do this, the researchers are using software from conservation biology for running population viability simulations. “When we ‘throw’ the data together, it will show the impact Neanderthals really had on their environment,” he says. “Maybe they didn’t play that big a role despite intensive hunting and landscape change. Then again, perhaps they did.” The hope is that “AlterEco” will reveal how long humans have been acting on and permanently changing the world. But it should already be clear that Neanderthals had a far smaller ecological footprint to account for than we do today.

AlterEco – Understanding the Anthropocene: human alternation of ecosystems in our deep history

Prof. Dr. Michael Hofreiter studied biology in Munich. Since 2013, he has been Professor for General Zoology/Evolutionary Adaptive Genomics at the University of Potsdam.
Mail: michael.hofreiteruuni-potsdampde