Stowaways – What can microorganisms on the skin of whales or penguins reveal about environmental changes? 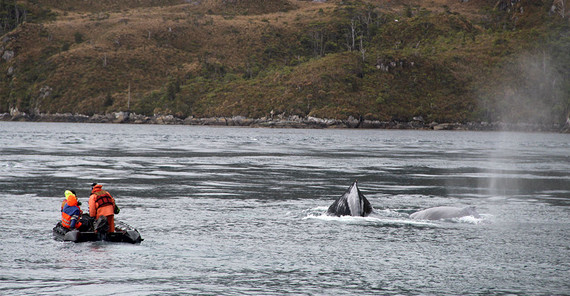 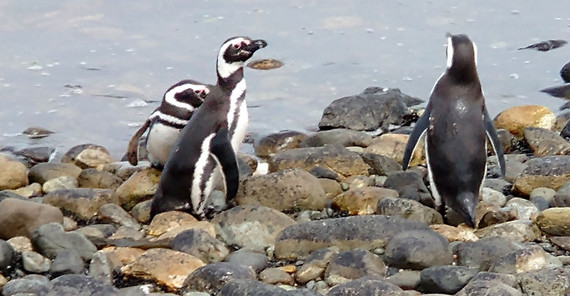 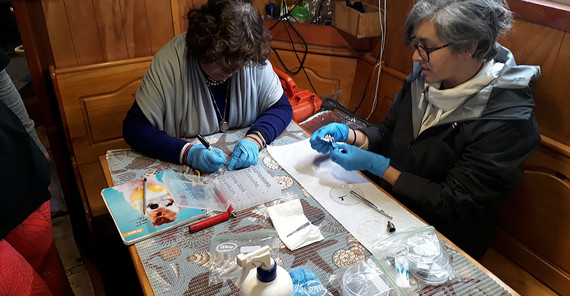 Humpback whales are among the most impressive animals on earth, with an average length of 13 meters and weighing up to 30 tons. Evolutionary biologist Prof. Dr. Ralph Tiedemann recently had the opportunity to get up close to these giants on an expedition: Only ten meters separated him from the whales, which he had approached together with a Chilean-Mexican research team in an inflatable boat in the Antarctic Ocean, south of Patagonia. Now Tiedemann is back in Potsdam and has brought back a few samples from his trip: small pieces of whale skin that the crew punched out using a special biopsy harpoon, which Tiedemann emphasizes was painless. He is interested in the genetic material contained in these samples.

Getting at this is not entirely easy. “First of all, you have to find the whales in the first place,” Tiedemann explains. Once the animals are located, you have to tell from their behavior whether they will stay at the surface or go on a longer dive right away. If they are not in the mood to dive, they  approach the whale by means of an inflatable boat, “in wind and waves.” Finally, the shot must also “sit” for successful sampling. This has to be done in the few remaining seconds when the animals are at the surface.

The research team was finally successful three times on this excursion and was able to obtain valuable skin samples. They contain much more than just the genetic information of the individual animal. Countless microorganisms live on the skin, which the researchers are also targeting. This community of bacteria and fungi is called a microbiome, and it fulfills important functions. In mammals, it influences the immune system and metabolic processes. A human being would hardly be able to survive without these approximately 39 trillion invisible co-inhabitants, which are found primarily in the intestine but also on the skin.

The microbiome is of great interest to researchers. Not only does it seem to have an enormous influence on its host, but it also reflects environmental conditions. The types of microorganisms that exist specifically on the skin of marine creatures, or the genes that are activated, could provide information about water quality or even temperature changes in the context of climate change. This microbial community is therefore the subject of a research project by the Chilean research institute CEQUA, based in Punta Arenas. In addition to the University of Mexico City, with project leader and microbiome researcher Prof. Valeria Souza, Ralph Tiedemann and his Potsdam research team are also involved in the project, which is funded by the Chilean government.

In addition to humpback whales, the researchers are also studying Magellanic penguins, sea lions, lobsters, king crabs, salmon and other species to cover important links in the sub-Antarctic food chain. While the microbiome is analyzed in Mexico, frozen samples of the humpback whale and Magellanic penguin arrive in Potsdam for molecular biology analysis.

Biologist Enrique Amaro, who is on Tiedemann’s research team, extracts the humpback whale DNA and prepares it for further analysis. Then the genome is sequenced and the sequence of the individual DNA building blocks is determined. In the end, he receives huge amounts of data with genetic information and can even identify which genes are active and which are inactive. Samples from different seasons will also provide information about possible seasonal differences. The researchers are also evaluating older samples taken from scientific studies or strandings.

Dr. Marisol Domínguez’s work is very similar. However, she studies the Magellanic penguin. “These penguins live in very large colonies and are very good at passing bacteria, including pathogens, among themselves,” she explains. The birds, which are about 70 centimeters tall, dig breeding burrows on small islands, usually under tree roots, to protect their offspring from predatory gulls. For sampling, the nests are located and a blood sample is taken from the foot of the young penguins. With the help of this genetic information, Domínguez hopes to find out how the genetic diversity of the population and environmental conditions influence the microbiome.
For the humpback whale, we already know that the species composition of the skin bacteria depends on the waters in which the animals move. There are also individual differences from animal to animal. Now, researchers hope to uncover further links between the microbiome, environmental characteristics and host populations to better understand which factors critically influence the microbiome. For example, how big are the differences between cetacean populations living in different locations?

“People often imagine the work of a biologist to be very adventurous: constantly on the move, always outside on exciting excursions and in great landscapes,” says Amaro. “In reality, as a scientist, I spend most of my time working on the computer and analyzing data.” But in a few months, things will get exciting for him, too: next winter, the research team will travel to Patagonia for another excursion to track humpback whales and Magellanic penguins once again. “We are still at the very beginning of our research,” Domínguez emphasizes. “But hopefully in a few years we’ll know more about the link between the microbiome, environmental conditions and population genetics in Antarctica.”

This text was published in the university magazine Portal - Eins 2022 „Diversity“(PDF).