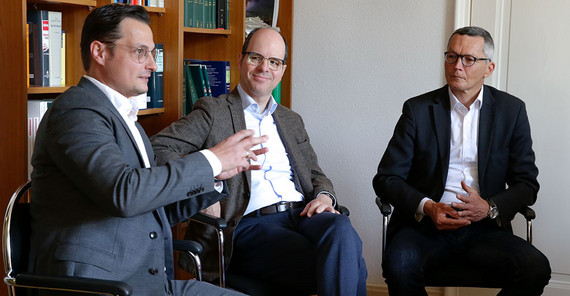 Large amounts of data are generated in the course of digitization that promise economic success. They have long been considered the core of the digital economy. But how should we handle them from a legal perspective? Who has access to data generated in the manufacturing or optimization process of products? And how can we limit the market power of companies that “sit on” the data they collect? The Research Unit “Intellectual Property - Digitization - Competition" at the Faculty of Law deals with such questions. It investigates current legal issues of information technology, intellectual property, and competition. It was founded by Christian Czychowski, Honorary Professor at the Faculty of Law and attorney at law, Tobias Lettl, Professor of Civil Law, Trade and Commercial Law, and Björn Steinrötter, Junior Professor of IT Law and Media Law. The aim of the three legal scholars is to bring clarity to the rather confusing and young field of data business law.

A tractor drives across a field – and collects data. Does the soil need to be irrigated? When is the best time to sow seeds? Where should one use fertilizer? With the help of sensors, agricultural machinery can now record a wide range of parameters, the analysis of which can help farmers increase their yields or farm more sustainably. So-called smart farming is an example of a data-driven economy, but its legal basis is still vague. Does the farmer actually have access to the data that the tractor collects? Or is it only available to the manufacturer? Can a third party who wants to build an irrigation system for the respective field use the data?

Czychowski, Lettl, and Steinrötter deal with problems like these in their new research unit. So far, there has been no law on the legal nature of data, but there is a jumble of different regulations, some of which overlap and contradict each other. “The legislator has basically not regulated the handling of raw data yet,” Steinrötter says. As immaterial objects, there is no data ownership for them in Germany. Nor are they considered intellectual property like a piece of music or a novel. And yet, according to Czychowski, there is “an exuberant flood of regulations” that can take effect when it comes to data, such as the General Data Protection Regulation (GDPR), which relates to the protection of the privacy of individuals, or the directives on the protection of business secrets and copyright protection of databases, antitrust law and, above all, the so-called Data Act, which the European Commission is currently getting off the ground. “There is a pluralism of legal sources that is just madness,” Steinrötter says. That’s exactly why the three lawyers want to pool their expertise. “We have an incredibly difficult field to plow. But together you’re less alone, and this is also true for research.”

A major problem in the discussion is that data in the legal sense was not even defined until recently. “In the GDPR, data and information are mistakenly equated,” he says. A few months ago, however, the European Commission presented its first draft of the Data Act: This is intended to regulate the handling of non-personal data in the European Union. For the first time, it contains a definition that, according to Steinrötter, is “very well done.” According to this definition, digital data is binary-coded information. The key thing here is that data is not defined as the information itself but only as its carrier. “To put it in another way, data is the syntax and information is the semantics.”

“The Data Act is indeed extremely relevant,” says Czychowski, who is among the few who have already studied data licensing agreements from a scientific perspective. The goal of the proposed act is to establish a general right of access to a wide range of data: Users should be allowed, for example, to get access to the data they generate. This sounds quite plausible at first but “has led to an incredibly heated discussion in German industry,” he says. “This would mean, for example, that a driver of a car would be entitled to demand the usage data of the right outside rearview mirror from the car manufacturer.” Getting hold of such data, however, would involve effort and costs, especially since it is usually raw data that is unchecked, unprocessed, and uncompressed and which can be erroneous. Moreover, when it comes to personal data generated in business, it is unclear in certain cases to what extent the Data Act or the GDPR or even both pieces of legislation apply side by side, says Steinrötter. “It’s up to the courts and researchers to cut through this Gordian knot.”

“Ownership, digitization, and competition are three concepts that cannot be considered in isolation from each other,” says Lettl. “They get their special zest when they overlap.” The European Commission and the German Federal Cartel Office are currently asserting themselves as global pioneers in dealing with digital companies. The European Commission, for example, recently presented a draft law on digital markets that would regulate the monopoly position of digital companies at the European level. The German Federal Cartel Office is also increasingly concerned with the data power of companies. A 2021 amendment to the Act against Restraints of Competition addresses online platforms and their handling of users’ personal data - such as Facebook.

Already in 2019, there were major proceedings by the Federal Cartel Office against the company because it had merged its collected data with that of the group’s subsidiaries Instagram and WhatsApp without obtaining the consent of the users. “This is now a huge case at the Federal Court of Justice. Facebook is claiming sole access to the personal data,” Lettl explains. “From a competition point of view, this is problematic because no other company has collected such a vast amount of data and it would be of the greatest interest to other economic operators.” According to Lettl, it is particularly data that creates economic power, which must be limited. “Otherwise, internet companies could do whatever they want. The key question here is how to limit their economic power – and whether legal regulations are still sufficient.”

Christian Czychowski emphasizes the great value of data today. “People keep saying that data is the oil of the 21st century. From my point of view, this is an unfortunate phrase, but it shows how important data has become – whether in terms of monopolies, global economic development, or the protection of ideas.” The three researchers are of the opinion that sharing data is beneficial to competition. But in practice, data is rarely given away voluntarily. “The farmer who owns the field probably has no access at all to the data his tractor is collecting,” Lettl explains. “And neither does a third-party supplier who might want to develop software for an irrigation system and can’t do this because the tractor manufacturer won’t release the data.” According to Lettl, regulations on the use of data are needed to be able to use innovations to a wider extent, promote competition and thus have more good products on the market. The German antitrust law is a first step here, and at the EU level, the Data Act is expected to establish a general right of access. However, there are still many imponderables.

Data exchange between companies is still not widespread, even though they could benefit from it. “The small and medium-sized companies fear competitive disadvantages just as much as the large corporations,” says Steinrötter. Google, for example, would certainly be reluctant to disclose its machine learning training data because other providers could use it to feed their own search engines. After all, the more data a company has collected, the more it yields as a commodity. But sharing data is important for economic progress, Lettl says. “Monopolies prevent competition and development. The more companies are allowed to access specific data in their work, the more competition it creates.” This, in turn, drives innovation. A change of mindset is necessary Czychowski says, for companies to be willing to make data accessible. Sticking to the illusion of data ownership is outdated. “We no longer live in the allocation age, but in the ‘Age of Access.’ Data sharing promotes innovation and thus serves the common good.”
DR. JANA SCHOLZ
Translation: Susanne Voigt

Since the end of 2021, Christian Czychowski, Tobias Lettl, and Björn Steinrötter have been working together at the Research Unit “Intellectual Property – Digitization – Competition”. In accordance with research-based teaching, the scientific work on the data economy and data law is also to be included in teaching. For this purpose,  an elective program for in-depth studies with the same name is to be established for the study of law. The lawyers are also in contact with colleagues from the Institute of Computer Science and the Digital Engineering Faculty. With the annual conference “Potsdam Talks on Data Economy,” the research unit is creating an international forum for exchange on data law. During the first event in February 2022, speakers from around the world presented the legal nature of data in China, Japan, and the US.