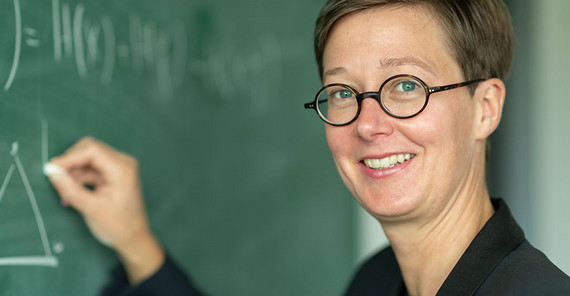 What connects ant colonies and the Internet, financial markets and the human brain? They are complex systems – a comparatively new field of research, but one that is gaining in importance. Karoline Wiesner has been Professor of Complexity Science at the Department of Physics and Astronomy since 2021. She investigates the mathematical and philosophical foundations of complexity science and its application to physical, climate, and social systems. The physicist worked abroad for many years and now holds the first professorship for complexity science in Germany. For “Portal Wissen”, she answered 33 very simple questions.

What do bee colonies, the Earth’s climate, the global economy, and the universe have in common?

They are all complex systems, that means the dynamics of the whole (people, the climate) do not exist at the level of the individual (bees, molecules).

Can complex systems also be simple?

They are often simple – in the sense that seemingly complicated phenomena follow simple mathematical laws.

What characterizes these systems?

Through feedback, the interactions of the many parts lead to a whole that is not centrally organized and yet robust.

How to analyze complex systems?

How susceptible to failure are they?

They are very robust in the face of random disturbances affecting parts of the system since other parts can quickly adapt and take over. But all robustness has its limits, as can be observed with the climate.

Does the Corona pandemic follow the rules of a complex system?

The pandemic is a dynamic of a complex system, which in turn consists of the complex systems viruses, people, ecosystems, and infrastructures.

How much philosophy is there in complexity science?

The phenomenon of emergence, that is, the emergence of something new from parts that do not themselves exhibit this phenomenon, raises questions. Is the causality here broken between the microscopic and the macroscopic? Many think, “yes”. I, on the other hand, agree with those philosophers of science who say that causality continues to go from the microscopic to the macroscopic and not vice versa, as physicists see it. Also consciousness, in my opinion, will ultimately be explained by the interactions of neurons.

Why is this field of research needed?

Less and less often, the boundaries between traditional disciplines correspond to the questions we need to answer for our coexistence: The pandemic is a striking example. To deal with it, we need to link the biochemistry of viruses with the physics of aerosols, the engineering of transport networks, the sociology of groups, and the psychology of individuals. This requires quantitative methods, and complexity science provides such methods.

Does complexity science provide answers to the big questions of climate change, globalization, and digitization?

The research field provides tools for the scientific objectives and quantitative analysis of these systems.

Why did you study physics?

Because physics has such incredibly convincing answers to the question “why”, usually expressed unambiguously in the language of mathematics.

When did you decide to become a researcher?

When I was 17, without really knowing what that meant. At that time, I read the science articles in the newspaper every week.

What do you want to achieve as a professor in Potsdam?

Complexity science combines my interest in physics with my passion for interdisciplinarity. I want to establish this field in Potsdam, in research, teaching, and in public outreach.

How important is success for you?

Success is the confirmation by others that your work is relevant. I need that time and again.

What was your biggest failure?

Failure is ... I’ve worked hard on something, and when it’s finished, I or others don’t like it. That happens all the time. I try to learn from it in the moment but to forget it in the long run.

In retrospect, what would you do differently?

Ask more questions during my studies.

What advice would you give to a young researcher?

Courage and self-confidence can be practiced. And they are half the battle in the science business.

I like the great importance that is still attached to the freedom of research and teaching today. In other countries, the university is becoming more and more similar to a company, which I find alarming. However, it is still a very hierarchical culture, which is not always conducive to the development of good ideas.

What would have to change in the academic system?

Teamwork needs to be rewarded more; most academic awards are for individuals. That is no longer in keeping with developments.

When he or she is still alive I prefer contacting this person directly instead of mentioning his or her name here. From the deceased: political scientist Elinor Ostrom.

When was the last time that science changed your life?

Science has sent me around the world, from Sweden to the US and England and back to Germany. This has influenced who the important people in my life are, and, not least of all, led to the good fortune of meeting my husband (in England).

What does a normal work day look like for you?

What do you like the most about your profession?

The freedom to select topics that I find important und interesting, the permission and the aspiration to constantly learn new things, and the students who want to learn from me.

What not at all?

The permanent (internal and external) pressure to perform.

Which book that you have recently read has remained in your memory?

“Ein Heldinnen Epos” (A Heroines’ Epic) by Annette Weber. I have a hard time with poetry, but this epic is great.

What is your favorite quote?

Groucho Marx is reported to have said, “I don’t want to belong to any club that would accept me as a member.” That has everything in it: humor, mathematics, and an appeal against arrogance.

Which invention would improve your life?

An internet that implements a new business model which places truth and fairness above consumerism.

How do you create a balance to your daily work?

Making music with the university orchestra Sinfonietta and swimming in and kayaking on Brandenburg’s lakes.

What comes to mind when you think of your childhood?

Is the glass half-full or half-empty for you?

What was the last thing you protested against?

I am rather lazy when it comes to demonstrations, but in England, where I lived until 2020, I took to the streets for remaining in the EU.

What do you fight for?

For overcoming prejudices, mainly my own.

When did you last go to the cinema, theater, or museum?

What do you prefer – tricky problems or simple solutions?