Risk management of floods and droughts depends on event magnitude 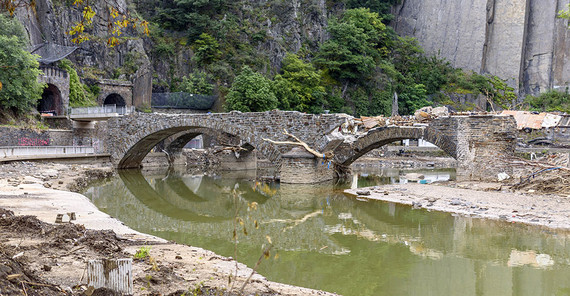 Photo : AdobeStock/Dwi
Damage after the flood in the Eifel

How effective and sustainable is risk management of flood and drought events worldwide? Empirical data show that this obviously depends on the event magnitude, as found by an international team of scientists with participation of the University of Potsdam, published in “Nature”. The authors note that the observed difficulty of managing unprecedented events of high magnitude is alarming, given the higher likelihood of extreme hydrological events due to climate change.

Risk management has mostly reduced the impacts of floods and droughts in the past. However, since it was not designed to deal with extreme events, the impacts are still severe when the magnitude of the flood or drought event has never been faced before. An international team of scientists lead by PD Dr. Heidi Kreibich, Helmholtz Centre Potsdam, GFZ German Research Centre for Geosciences, analyzed a dataset of 45 pairs of flood or drought events that occurred in the same area on average 16 years apart, across different socioeconomic and hydroclimatic contexts from all continents. They found only two success stories where the impact of the second, more hazardous, event was lower as a result of improved risk management governance and high investment in integrated management.

Thorsten Wagener, Humboldt Professor at the University of Potsdam, Institute of Environmental Science and Geography, and co-author of the study, notes: “At a time where climate change is announcing itself with increasing droughts and floods across much of the world, it is critical to understand how society has learned from disasters in the past (or not). Looking through case studies around the world we can identify the very rare examples where the response to a disaster has reduced the impacts of larger disasters at a later time. Here, people anticipated that the future might be worse.”
Unprecedented events of high magnitude seem to be difficult to manage, as the study showed. Partly this can be explained by the upper design limit of large infrastructure such as levees and water reservoirs. Once their threshold is exceeded, they become ineffective. Guilherme Samprogna Mohor, PhD student at the Institute of Environmental Science and Geography who also contributed to the publication, summarizes: “The case studies reinforce that hazard, exposure and vulnerability should all be considered for an effective impact reduction. For example, the constructing of reservoirs to counteract drought might encourage increased water demand.” Risk management strategies implemented before large floods and droughts happen are still too rare. Their success depends on factors including effective governance of risk and emergency management, high investments in structural and non-structural measures, and improved early warning and real-time control systems.