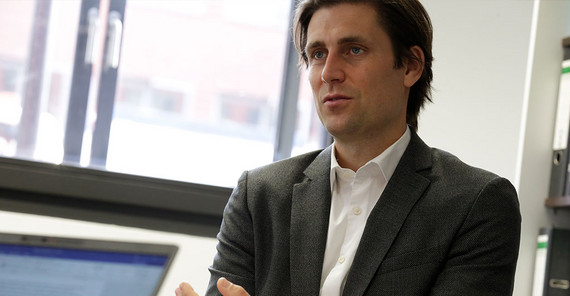 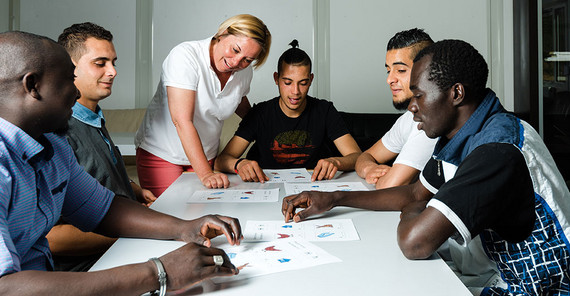 Since 2021, Jasper Tjaden has been Professor for Applied Social Research and Public Policy at the Faculty of Economics and Social Sciences. His research on integration and migration processes has already caused quite a stir. In a study together with economist Tobias Heidland from Kiel University, for example, he examined the effect of border openings on long-term immigration patterns. Did Angela Merkel’s decision in 2015 to keep the borders open lead to more people coming to Germany in the long term? This notion had been repeatedly heard in public. “Since the federal elections and the end of the Merkel era were coming up, we wanted to test this hypothesis,” Tjaden explains. For this purpose, the researchers evaluated data from the years 2010 to 2020. The study was based on asylum applications before and after 2015; in addition, people around the world were asked whether they planned to migrate to Germany. Ultimately, the researchers looked at Google search queries: Was “Germany” frequently searched in connection with “visa”?

To cut a long story short, the social scientist summarizes, “We have not found any evidence of such a pull effect anywhere.” Actually, there had already been a rapid increase in immigration in 2011/12, a few years before the so-called refugee crisis. After 2015, interest in migration to Germany quickly declined. The primary reason for the larger number of refugees in 2011/12 was the civil war in Syria. “It had been raging for much longer, but many people had initially fled to neighboring countries.” Conditions in the reception camps in these countries had deteriorated tremendously, with too little food and inadequate health care. “Médecins Sans Frontières” sounded the alarm and warned that people would start to leave if the situation did not improve. At the same time, the conflict in Syria had intensified, bombardment had increased. The second-largest group of migrants at that time came from Iraq and Afghanistan, where armed conflict has raged for decades. “For the majority of people who applied for asylum, these conditions were the driving force – not Merkel’s decision to keep the borders open,” Tjaden says. So, the chancellor had not triggered a mass migration with her statement “We will manage this!” Rather, the development had already reached its peak at the time of the statement.

An explosive field of research

The media response to the study was enormous. The results were presented in Spiegel, Frankfurter Allgemeine Zeitung, Tagesspiegel, Fokus, and ZDF. “We were happy about it, but it was also a challenge,” Tjaden says. He received not only media inquiries but also many e-mails from citizens, “from the left to the right”. There was very interested but also extremely critical feedback,” Tjaden says. He is aware of the explosive nature and political relevance of the topic. He is interested in migration and integration research, he says, because the topic has high social relevance. At the same time, many questions remain unanswered and there is only little knowledge about migration in many debates. “Therefore, it very quickly becomes ideological, in media, politics, and everyday life. But as a result, the demand on communicating research results is much higher – we have to report carefully.” And Professor Tjaden is not entirely inexperienced with this. Until his appointment in Potsdam, the social scientist worked for the Global Migration Data Analysis Centre (GMDAC) of the International Organization for Migration (IOM), a United Nations agency. “I provided scientific policy advice there. We were constantly in contact with ministries and the press.” Before that, he had worked for the World Bank and for the Migration Policy Group.

Why did he leave his job at an NGO to come to the University of Potsdam? “To have more time for research,” he says. Of course, he had an “interesting job” at the UN. “I learned a lot there, traveled a lot, and worked in a great team. But some fundamental questions came up for me that I couldn’t pursue.” In the day-to-day work of an NGO, there is little time for research because the projects are of very short durations. Reports for ministries have to be written all the time, and there is a lot of pressure. “Although that is electrifying, it meant that I had to write the scientific papers in the evening or on the weekend.” But there’s something else that drew Tjaden to the university. “I really enjoy teaching.” And he is not the only one: His seminars on migration or the evaluation of political measures are already in high demand among students.

Tjaden wants to contribute to filling the empirical gaps in migration research. “One of our problems is that we have too little data,” he says. Although the data situation on the integration of refugees in Germany has improved greatly over the past ten years, when it comes to migration, he says, science can only work with official dates of entry. “We know little about why, when, and under what circumstances people migrate. We have too little information from countries of origin.” Better sources of data are mostly limited to OECD countries. Little is known from large parts of Africa, Asia, and Latin America, he says.

Digital data is therefore the focus of Tjaden’s research. The scientist believes that social media can help make predictions about migration movements. So far, after all, these can only be measured retrospectively. “Predictions have become particularly important since 2015. Because the migration movement came as a great surprise to many at the time, despite the omens.” Facebook, for example, provides data for analyzing friendship networks, such as: How many people in Ghana have friends in Argentina? For each pair of countries, one can determine the density of friendships – and, interestingly, this correlates with international migration movements. Thus, he says, changes in friendship networks can be used to predict migration. In addition to Facebook, Tjaden has looked at seven other data sources, including LinkedIn, mobile phone services, and satellite data. It’s also possible, he says, to use flight data between two countries to see if more passengers are leaving than entering a country.
To learn more about emigration plans in the countries of origin, Tjaden interviewed people in West Africa. “We and a team were on-site and collected data from over 8,000 people in Senegal and 3,500 in Guinea with the support of a survey institute.” In a method project, the social scientist wanted to find out whether the instant messaging service WhatsApp can be used to survey (potential) migrants. After all, the fundamental problem for researching migration is staying in touch in order to record whether respondents have actually migrated. The advantage of WhatsApp: It is very inexpensive and very popular in some countries – especially voice messages. A year after the last survey, the team called half of the interviewees and contacted the other half via WhatsApp voice message. The probability of participation was not much higher. There is, however, the methodological advantage that the app is much cheaper than mobile communication.

Investments in immigrants pay off

What must the future government do better in terms of integration? “Germany is a latecomer when it comes to integration, has long denied being a country of immigration,” Tjaden says. “There were huge failures in integration policy with guest workers, some of whom may never have fully arrived.”
Now it’s also a matter of providing the children of the new generation of immigrants with a good education and career opportunities. “Fortunately, a lot has happened in the past 20 years,” Tjaden says. Particularly in 2015, when the number of immigrants in Germany was at its peak, many changes were quickly introduced. Access to integration courses was facilitated and more people were granted a secure residence status more quickly, even before their asylum application was approved – in order to integrate them more easily into the labor market. “A good measure,” Tjaden thinks. “And a major administrative effort.”

Nevertheless, the social scientist is generally dismayed by how little is spent on integration. “Although it would be worth it to invest much more!” Language courses are an important point, he says. It is unreasonable to expect that people with little education reach a colloquial language level after 600 hours of German lessons, he says. While the courses would have positive effects, they have to be adapted to different target groups: parents, women, or certain occupational groups. “The sooner refugees get a job, the more the state saves. Two or three times as much could certainly be invested. Successful integration reduces social spending and increases cohesion in society,” Tjaden believes. The better, for example, the German language skills of the immigrants, the greater the trust of the host society in the new citizens.

Together with his PhD student Samir Khalil, Professor Tjaden is currently researching the influence of language courses on the integration process of refugees. So far, refugees have been randomly distributed among federal states in Germany, “you can be lucky or unlucky, end up in areas with high unemployment, great xenophobia or very few offerings of integration courses.” Tjaden is now working with colleagues at the Hasso Plattner Institute to improve the distribution of refugees in Germany. The researchers have developed an algorithm that does not proceed at random but according to the characteristics of a person and the district, taking into account family situation, training places, housing vacancy, etc. “We want to create a better match this way. This may give immigrants a better start.”