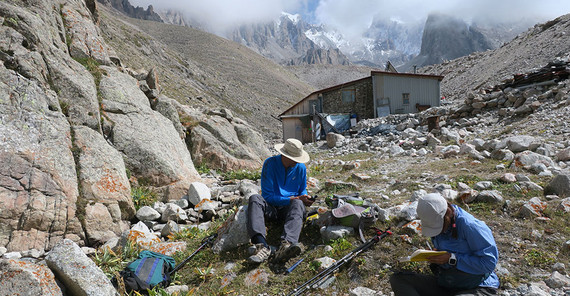 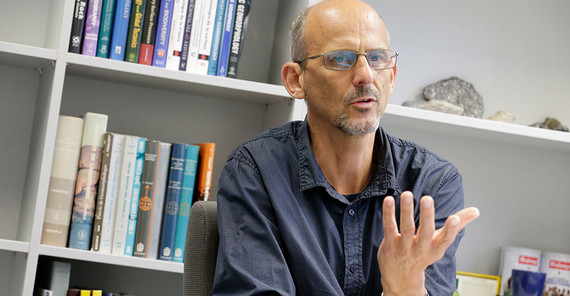 Geoscientist Peter van der Beek is a specialist in thermochronology. With this method, he looks far back into the history of mountain ranges and landscapes using isotopes of the noble gas helium that have survived millions of years in the crystal lattices of minerals. They tell him how quickly mountains have risen and how they are being eroded at the same time.

When he came to Potsdam from Grenoble in 2020, everything was a bit different from what was planned: It wasn’t until June – two months later than originally planned – that Peter van der Beek was able to move into his office at the Institute of Geosciences and take up his position as Professor of General Geology. “We had a lockdown in France and I couldn’t relocate,” he recalls. The schedule, however, was tight: A major research project was about to start, researchers had to be hired, and a special measuring device was due to arrive in Potsdam. The pandemic upset the schedule a bit. “But in the end, we managed to get everything done and were able to get started,” van der Beek says.

In the EU-funded research project “COOLER“, he and his team are now on the trail of those forces that form the appearance of mountains. Why are there deep valleys and high peaks, rugged mountainsides or plateaus? Why do mountains look so different? How do tectonic uplift and erosion interact? And what’s the role of the climate in all this?

Whether it’s the Alps, the Rocky Mountains, the Himalayas, or the Andes – the Earth’s mountain ranges have an eventful, still ongoing history. Fast-growing mountain ranges like the Himalayas are pushed up a few millimeters per year by plate tectonics. Others grow less than a millimeter. Wind, precipitation, glaciers, or chemical weathering erode the material at the surface again – sometimes this erosion offsets the growth of the mountains completely. “The shape of the mountains gives us information about tectonic uplift and erosion. It is this erosion history that we are trying to understand,” van der Beek explains.

As a geologist, he looks at a period of several million years and uses an approach that analyzes how the rock has cooled during it. This method is called thermochronology. It looks at the structure and composition of minerals and thus at their history. The temperature below the Earth’s surface increases by about 30 degrees Celsius per kilometer. When plate tectonics pushes material from the depths to the surface, it cools down. Van der Beek is one of only a few experts in thermochronology, and can draw conclusions about erosion history from this information.

The instrument needed for this analysis takes up a lot of space: At the Potsdam institute, a separate small laboratory is needed for it. “There is only one other lab in the whole world that already uses this technology effectively – in Berkeley, California,” says Peter van der Beek, who is proud of the Potsdam noble gas mass spectrometer. Other research laboratories are working on establishing the method as well. Although first publications on it appeared in 2005, a noble gas mass spectrometer is very expensive and not easy to handle. The samples have to be irradiated with protons, for example. “You can’t do that in many places,” van der Beek explains.

In the Potsdam lab, it is possible, and the first measurements with the precious instrument are slowly getting underway. The rock samples for it come from the Swiss Alps. Last summer, van der Beek spent a week there with a research team and brought rock with him for analyses. The Alps are among the mountain ranges of the Earth that particularly fascinate the researcher. “A lot of very good research has already been done here. We can use all this data to go into more detail and answer new questions,” he explains.

But unexplored mountains are also very appealing to the geologist. The Tianshan Mountains in Kyrgyzstan, for example, where he spent several weeks last summer. “It was a very special research trip,” he recalls. “We were in an area on which there is no scientific data yet.” Untouched and unexplored – exactly such landscapes are a source of inspiration and motivation for van der Beek. In return, he gladly accepts the hardships of such an expedition – hours of driving in a jeep over bumpy gravel roads and across the region, a lack of infrastructure and camping under very basic conditions, far from any civilization. “We were ten hours away from the next village,” he recounts. “To be the first to collect data in such a place is something very rare and special, a little adventure.”

The gray chunks of rock that Peter van der Beek brings back from such a trip weigh several kilograms. About 350 kg of samples from Kyrgyzstan are waiting for the flight to Germany to be analyzed in the Potsdam laboratory. The researchers are particularly interested in the mineral apatite contained in the rock. Helium isotopes have formed in the crystal lattice of this mineral over millions of years as a result of the radioactive decay of uranium. Helium is a very light element that moves through the mineral and can escape from it. As the rock rises and cools at the surface, the helium slows down and becomes trapped in the apatite. In the case of the helium-4 isotope, this happens at 85 – 75° C at a depth of 2 - 3 kilometers below the Earth’s surface. Thermochronologists also use other elements that solidify at different depths and temperatures and thus have a whole collection of so-called “isotope clocks”.

All that is needed for the analysis of helium in the noble gas mass spectrometer is a granule of apatite the size of a sand grain, which is slowly heated inside the instrument. The trapped helium is thereby “thawed” and begins to escape. The device measures exactly how much helium is released at what temperature and when the process stops. First, the helium escapes from the outer layer of the apatite grain. The warmer it gets, the more helium escapes from the inner layers. With the measurements, the researchers can look back into the past and trace the location of the minerals in the Earth's crust. When was the rock at which depth? They can also tell whether the rock migrated quickly or slowly to the surface during its history and how high the erosion rates are at the site where it was found.

Glaciers, precipitation, and the climate

“We are only able to measure erosion indirectly because the material disappears,” explains van der Beek. He is particularly interested in glacial erosion. Glaciers change the landscape and shape mountains but in very different ways, depending on geographic location and topography. When the ice and snow masses rub over rock, they can take a lot of material with them and leave deep valleys. But if they are frozen to the rock, they protect it in all weather and thus from erosion. “Glaciers have a strong local effect,” he emphasizes. That’s why he plans measuring inside and outside of various glacier valleys to determine these effects more precisely.

Wind, precipitation, rivers, and glaciers are the driving forces of erosion – and gravity, too, shapes landscapes. Over millions of years, however, there is another actor that also determines the interplay of erosion and tectonics: the climate. Chemical weathering of silicate rock removes carbon dioxide from the atmosphere - a process that has naturally cooled the climate for about 50 million years. If it weren’t for the massive greenhouse gas emissions by humans, the Earth would likely continue to gradually cool down. “Human-induced climate change outpaces all of these natural processes by orders of magnitude,” the researcher points out. “If we understand the whole system better, it will also help us distinguish natural from anthropogenic influences.”

The less carbon dioxide is present in the atmosphere, however, the more inefficient chemical weathering becomes, so that, according to one research hypothesis, this process would have slowed down. The erosion of organic material also removes carbon dioxide from the atmosphere. “In the Indian Ocean, a research team found tree trunks on the seabed that got here from the Himalayas through erosion hundreds of thousands of years ago,” van der Beek says, describing the process. The wood is preserved in the deep sediment layers of the waters – and with it many tons of carbon dioxide.

How cooling has affected global erosion rates, how climate, tectonics, and erosion together shape mountain landscapes, and what feedback mechanisms are at work is still not sufficiently understood. With the thermochronological data, van der Beek and his team hope to provide some explanation. They want to refine thermochronological methods and develop numerical models to better analyze and interpret data sets from around the world. What are the differences between individual mountains? Which differences can be explained by tectonics, and which by climate? In the end, the models are meant to provide a look not only into the past but also into the future. How will a landscape further evolve and what are the driving forces?

The next research trip will take Peter van der Beek to Patagonia. Here, the southern foothills of the Andes form mountain ranges with numerous and large glaciers. “It’s all a bit complicated at the moment, but we very much hope that this expedition will be possible,” he says. After all, the rock samples from the region will provide additional important data for a better understanding of what shapes mountains in the long term.

The research project “COOLER” (Climatic Controls on Erosion Rates and Relief of Mountain Belts) investigates the feedbacks between tectonic processes in the lithosphere and climatic processes in the atmosphere. It uses new methods of thermochronology to collect and analyze high-resolution data on erosion rates and relief changes in mountains.

Prof. Dr. Peter van der Beek studied geology at Vrije Universiteit Amsterdam. For over 20 years, he researched at the Université Joseph Fourier in Grenoble, France. Since 2020, he has been Professor of General Geology at the University of Potsdam.
Mail: vanderbeekuuni-potsdampde