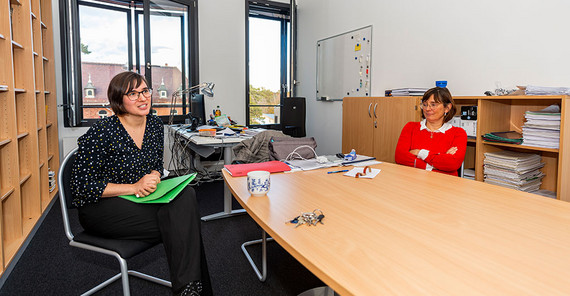 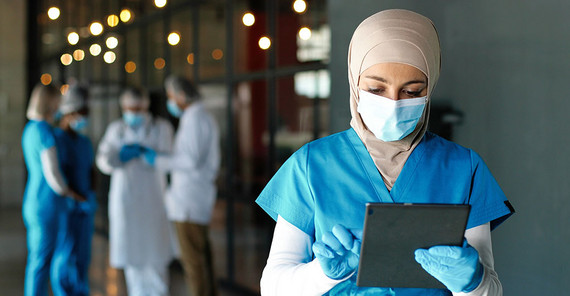 How do cultural and religious diversity influence the way we deal with each other in public institutions such as schools, swimming pools, and hospitals? Researchers look at this question in the project “Bodyrules” with regard to the body. The Potsdam research team visited schools with a high percentage of migrants and interviewed the young people and teachers. The first results show: Apart from open conflicts there are many unspoken rules and conventions concerning the body.

Armando Rodrigues de Sá came to Germany in 1964. The Portuguese was the German Federal Republic's millionth guest worker and received a bouquet of flowers, an honorary certificate, and a moped on his arrival at Cologne-Deutz station. The 38-year-old carpenter was representative of all those guest workers from Italy, Greece, Spain, Turkey, Morocco, South Korea, and former Yugoslavia who had been recruited since the 1950s. In the GDR, there was also a great demand for workers from abroad – here especially from Vietnam, Angola, Cuba, and Mozambique.

Germany has been a country of immigration for a long time. But the Federal Republic of Germany, to which Armando Rodrigues de Sá immigrated in 1964, was very different from the world today. In the 1960s, married women in the FRG were largely dependent on their husbands, divorce and children born to unmarried parents were a stigma, and homosexuality was punishable. Over the years, the call for individual self-determination grew consistently louder. More and more, different social groups demand equal rights regardless of life and family models, origin, religion, and gender. For decades, sociologists have been noting a social shift toward greater diversity in lifestyles, customs, and manners in Germany.

On the one hand, this is enriching for society, but on the other hand, it holds a great deal of potential for conflict. The research project “Bodyrules” looks at areas of tension that can arise in connection with the body: Clothing, fasting rules, touches, or gender relationships vary between social milieus, and religions. In this project, researchers from the University of Potsdam, Berlin’s Charité Hospital and the Social Science Research Center Berlin (WZB) are taking a look at schools, hospitals, and swimming pools to find out how different social norms are reflected in these places, how the institutions are adapting to increasing diversity, what conflicts arise, and how they are dealt with.

Fasting as an area of tension

Sociologist Prof. Maja Apelt and her Potsdam research team conducted a nationwide online survey at more than 200 schools and visited four schools in urban milieus with a share of 80% or more Muslim students. The researchers spoke with school administrators, teachers, and ninth-grade students. “The first thing we talked about was which topics related to the body are seen at all at the schools,” explains Annika Koch, who is doing her PhD in the project. The interviewees were free to choose which conflicts or problems they wanted to talk about and which aspects were particularly important to them. Which official rules apply at the school? What unspoken unofficial norms come into play? How are rules interpreted from different perspectives? And what happens when rules are broken?

At the schools, two topics became apparent that particularly often lead to misunderstandings and resentment: fasting during Ramadan and the clothing of female students. During the fasting month, students are not supposed to eat or drink anything between sunrise and sunset. At school, this has an impact on students’ ability to cope with stress: some are tired and listless, they find it harder to concentrate and perform well.
Fasting students on the one hand and teachers to whom this is alien on the other – during Ramadan different perceptions from respective perspectives become apparant. Some teachers perceived the fast as a provocation. They suspected that their students were using the fast as an excuse. “Along the lines of: ‘They don't want to learn and that’s why they’re fasting,’” Apelt explains. “That attitude really surprised me.” The Muslim youth, on the other hand, wished for more understanding. For them, Ramadan is a special time of the year, comparable to the Advent period and Christmas for Christian classmates. Annika Koch sees this example as a general challenge for the German education system in a pluralistic society. On the one hand, there is a demand for equality of lifestyles, but on the other hand, time structures such as holidays often unconsciously favor Christian traditions.

The clothing of female students also harbors potential for conflict. Officially, there are no dress codes in schools. Everyone can wear what he or she likes as long as it does not contain any illegal symbols. In everyday school life, however, the researchers observed something different: pressure is often exerted by peers when female students wear tight clothing or crop tops. Apelt and Koch fear that this may unconsciously lead to discrimination, for example when teachers approve of peer group pressure, especially among Muslim girls. “In our interviews, some Muslim girls brought up the problem of sexist comments about clothing and felt that teachers do too little about it,” Apelt says. “It is often difficult for teachers to intervene, especially if the comments are made outside of class and are justified with religious reasons. In addition, some teachers also disapprove of cropped clothing.” If teachers stay out of the clothing issue, however, they may encourage unofficial dress codes and accompanying group dynamics.

“The whole topic is gendered,” Apelt stresses. “First and foremost, it affects the girls and women who are being restricted.” In the discussions, however, it became apparent that female teachers are not free of this either: They also dress, mostly unconsciously, according to an unofficial school convention and restrict themselves. In the classes and in the staff rooms, however, this is hardly ever discussed. This makes it difficult to approach problems together.
Can official rules help manage the conflicts better? Whether it’s the school, hospital, or swimming pool – in all three spaces, she says, it’s not easy to stipulate rules. “Then you make the conflict public,” explains Apelt. “And rules that have been introduced also have to be enforced.” It is often easier to look for solutions outside of official rules in discussions. Sometimes people simply look the other way. After all, teachers have enough other problems to deal with in their daily job routines.

What this means in practice can be seen in swimming pools, for example. Here, full-body bathing suits – so-called burkinis – are generally permitted. Nevertheless, as the researchers led by Prof. Ines Michalowski and Dr. Oliver Schmidt from the WZB discovered, there are some facilities in Germany where swimming with a burkini is not possible. Some lifeguards referred burkini-wearing women to the non-swimmer pool. Some women felt so insecure due to the reactions of other visitors that they refrained from going to the pool altogether. “The examples show: Even though it is officially allowed to go to a pool wearing a burkini, there are norms among people on another level that limit this right,” she explains.

“In all three spaces, there are rules that initially take diversity into account,” the researcher notes. “But we have a shortage of resources and an additional burden on staff everywhere.” Cultural diversity, after all, also means that teachers or medical staff have to adapt to different needs and have a higher workload. How to deal with this is negotiated, often unconsciously, among all those involved. Conflicts are often not openly dealt with. Does this lead to disadvantages and discrimination, for example, because they result in different educational opportunities for students? The researchers now want to make further investigations.

Looking for the right strategy

Currently, the researchers are looking through the interviews and survey responses, analyzing the situations in the schools, and listing the conflicts that respondents have brought to their attention. However, Annika Koch dampens expectations that their research findings will provide easy solutions. “A strategy that works well in one school may already be problematic in another.” She says it depends on the particular circumstances – the staff, the students, the individual conflicts and problems.

The results of the research project can help people at the schools get along with each other despite different needs. Koch visits the schools again and takes the analyses with her. When she presents what conflicts occur at the schools and what effects they have on students, but also on teachers, the situation can be better reflected and perceived by the school community. “We provide reflective knowledge,” she says, hoping that this helps schools find a way to communicate more openly about their conflicts and also become more sensitive to them. As she says, the goal must be to find common rules of social interaction.

One example of such collective negotiations is the so-called “Neukölln Recommendation”, which was published in 2017 at the initiative of the Berlin district office of Neukölln, the local education authority, and the Senate Department for Education, Youth, and Family. Together with parents as well as mosques and family counseling associations, the authorities had asked how Muslim students can be supported during Ramadan to better reconcile their school and religious duties. The result of the discussions are twelve tips for teachers and parents, which were prepared in a mutual exchange. They state, for example, that fasting is a pillar of Islam, but at the same time does not relieve someone of school duties. Fasting can also be postponed in case of important exams or tests. Not all Muslims, however, agree with this interpretation of Islamic rules. For the researchers, the “Neukölln Recommendation” therefore reveals an interesting field of tension between state and religion: state actors recognize religion and at the same time interpret it in a specific way. This raises new questions and problems.

To be able to negotiate solutions for conflicts, you have to talk to each other. “There are no easy solutions,” Apelt emphasizes. However, diversity is increasingly being recognized -– politically, in society, in institutions, and by authorities. “But the uncertainties about how best to do justice to this diversity are still great.”

Prof. Dr. Maja Apelt studied sociology and economics at Humboldt-Universität zu Berlin and earned her doctorate at Leuphana University Lüneburg. Since 2010, she has been Professor for Organization and Administration Sociology at the University of Potsdam.
Mail: maja.apeltuuni-potsdampde

Annika Koch studied social sciences at Humboldt-Universität zu Berlin. Since 2018, she has been a PhD student at the University of Potsdam.
Mail: annika.koch.ivuuni-potsdampde