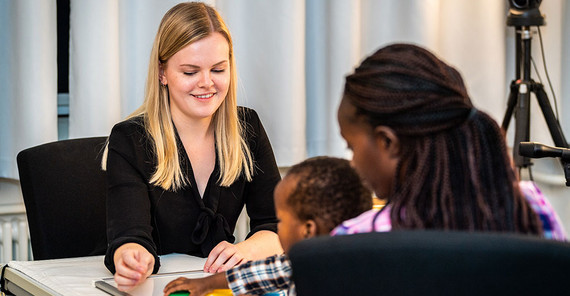 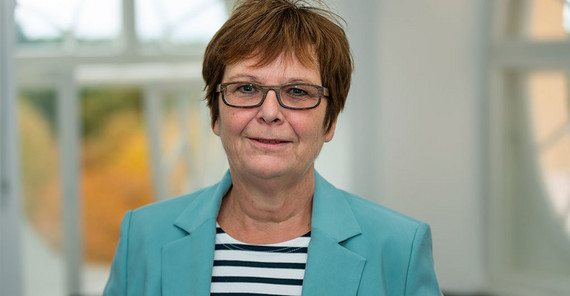 Barbara Höhle has a passion for science: With curiosity and experiments, she keeps advancing her subject psycholinguistics with great strides. Calm in tone and strategic in thinking, she has also been acting as Vice President for Research, Early Career Researcher, and Equal Opportunities since January 2021. Barbara Höhle is convinced that diversity is essential for the future of the University of Potsdam.

Barbara Höhle made her commitment to equal opportunities part of the title of her office, even before she was appointed Vice President for Research, Early Career Researcher, and Equal Opportunities. “It’s important for the university,” she says. “With increasing diversity and international students and employees, we need to bring different people along and make the university attractive to all – as a place of study or work.” The field of equal opportunities, however, still takes up less than a third of her responsibilities as vice president, she estimates. “I’m sure that is also due to the good collaboration with the Equal Opportunity Coordination Office,” Höhle says with a smile.

When it comes to supervising her doctoral students, however, the psycholinguist sees challenges. “In some academic cultures, the doctoral adviser plays a somewhat different role than in ours,” she explains. “They are often perceived as an authority who intervenes when doctoral students encounter problems – even in spheres of life other than academia.” It could be difficult when such a role is expected of us, the 64-year-old scientist reflects. “We see the doctoral adviser’s task primarily as providing scientific support for the doctoral project. It’s important to be aware of the different expectations and to deal with them as a matter of course.” But Höhle adds that social background plays a role, too. “The wide range of experiences that people bring with them when they come to a university should be given more attention and consideration.” In her subject, linguistics, applications have long come from “all over the world”. “We are international, especially in the master’s programs,” Professor Höhle emphasizes.

From laboratory rats to the BabyLAB

Barbara Höhle came to Potsdam in 1995 as a research assistant at the newly established Institute of Linguistics. Before moving to Potsdam, the researcher was not particularly interested in the field of language acquisition, which was to become a central field at the University of Potsdam. “I didn’t find the topic particularly attractive,” Höhle recalls, laughing, “also because it was a women’s topic. Especially female students found it interesting to work with children.” Her research field was speech disorders in adults, which is also what she wrote her doctoral thesis on. But the researcher who had been appointed to the professorship of first language acquisition in Potsdam was looking for someone with experimental experience. Höhle had this expertise, and so the two began an intensive collaboration. An earlier aversion to the subject developed into a passion that continues to this day. Höhle has been working as a professor in Golm since 2004. “Research on language acquisition totally got me hooked," she says today. “Together with my predecessor, Professor Weissenborn, I built the BabyLAB, which will celebrate its 25th birthday next year.” When she talks about it, she can’t help but remember a remark made by a psychologist in whose research project she was employed as a student assistant. “She said that she only studied psychology because she had always wanted to let rats run through mazes. I’m not a psychologist but in retrospect I sometimes think that remark shaped me.” Indeed, research with babies presents special methodological challenges. “You have to think about how you can tease out of the little creatures what they already know and what not, without being able to ask them. After all, they can’t talk yet,” she explains. “And to this day, I find it fascinating to think of experimental ways to accomplish that, regardless of whether the person is three months or 30 years old.”

As project leader, department spokesperson, dean and now as vice president, Professor Höhle is always interested in the structures of research and teaching. “It broadens the perspective enormously to have not to only one faculty in mind but now the entire university.” Höhle feels very fortunate “to be able to develop something myself and not be pressed into ready-made structures. The University of Potsdam is still very dynamic in its relatively early development.” But she also notices that the faculties and directorate do not always act in concert. This is certainly also due to the rapid growth of the university in recent years, she says. She wants to counterbalance this in order to provide the best possible support for the core tasks in research, which are to be handled by the faculties. The Vice President for Research, Early Career Researcher, and Equal Opportunities hopes that the University of Potsdam will be successful in the next round of the Excellence Strategy. “The timing is right. That’s what I’m firmly committed to.” She has already achieved a lot in her own research. “And that’s what I will continue when I am in so-called retirement, writing books and re-evaluating certain data sets.”

All in all, Höhle is very satisfied with the development of science in Potsdam. New bureaucratic obstacles, such as those created by changes in data protection regulations or budgetary law, “sometimes get on my nerves,” but they don’t slow down her enthusiasm. The passionate researcher notes something else though. “In my generation, many women who chose a career in academia decided against having a family. For them, the compatibility of science and family hardly existed. Fortunately, this has changed.” The fact that the proportion of women in new appointments to W3 professorships is nevertheless still only one-third Germany-wide represents a challenge for Höhle. “More efforts are needed here!”

Prof. Dr. Barbara Höhle studied linguistics, psychology, and social sciences at Technische Universität Berlin. Sie earned her doctorate and habilitation at Freie Universität Berlin. Since 2004, she has been Professor for Psycholinguistics at the University of Potsdam. In January 2021, she assumed the office of the Vice President for Research, Early Career Researcher, and Equal Opportunities.
Mail: barbara.hoehleuuni-potsdampde