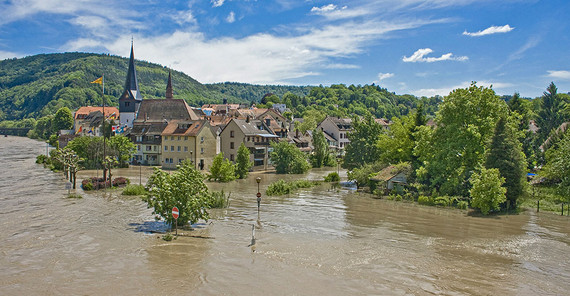 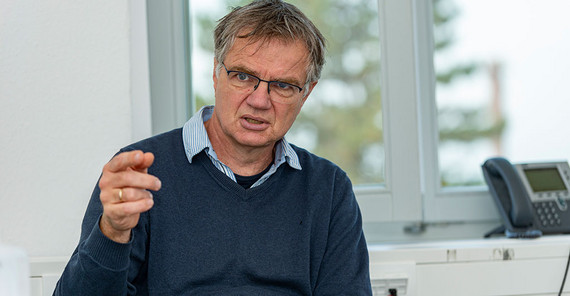 In July 2021, there were devastating floods caused by heavy rainfall with 180 deaths and immense economic damages in Rhineland-Palatine and North-Rhine Westphalia, and to some extent also in Saxony and Bavaria. Such an extreme flood event is very rare but within the realm of possibility, as researchers of the working group Hydrology and Climatology led by Prof. Axel Bronstert say. In principle, cities such as Berlin are also at risk.

The term “flash flood” refers to rapid, flash-like, thunderstorm-induced flooding. The stronger the thunderstorm and the higher the rainfall intensity, i.e. the amount of rain per unit of time, the less water the soil can absorb proportionally. The cause of such pluvial flooding – flooding caused by heavy rainfall – are local, convective precipitation cells, usually with a diameter of ten kilometers or less. “A lot of water comes down very quickly from these cells, and when the surface can no longer absorb it, there’s a flood," explains hydrologist Prof. Bronstert. Such extreme events can happen anywhere, but their effects are naturally dramatic in populated areas, especially in cities. Heavy rainfall in the Italian region of Liguria caused flooding and landslides on October 4, 2021, for example. Cities on the coast and inland cities were affected, with rivers bursting their banks. Such events with more than 100 liters per m2 in a few hours are relatively common in the Mediterranean. Another example: In July 2014, violent storms with unimaginable rainfall of 292 liters per m2 in just seven hours flooded Münster. Such a large amount of torrential rainfall in such a short time had never before been measured in Germany before. These precipitation-induced floods, however, were not always documented in the past.

A flood hazard map for Berlin

In Prof. Bronstert’s team, hydrologist Dr. Georgy Ayzel, PhD student Omar Seleem, and PD Dr. Maik Heistermann research what triggers pluvial floods and how to predict the hazards for inhabited areas. In his doctoral thesis, Ayzel has developed models for rainfall prediction with lead times up to 1-3 hours. “In this context, the Rainymotion model delivers forecasts that are comparable to those of the German Weather Service. The RainNet model is a neural network for radar-based precipitation nowcasting,” he explains. All models were consistently implemented using free software in a transparent and reproducible approach. This way, Ayzel also shows the advantages of open-source applications in this field. In his current research project, he is investigating how convective rainfall events must take place in order to cause severe flooding in urban areas. He is looking at how the frequency and magnitude of rainfall extremes have changed in the past or could change in the future due to global warming.

As a DAAD scholar in the Graduate School Scholarship Program, Seleem has been working on a project to predict urban pluvial flooding based on the analysis of radar image data and hydrological modeling since 2019. His doctoral thesis includes several subtopics, for example a case study to identify high-risk areas in Berlin, since the city is not completely flat. Such a hazard map for floods caused by rainfall does not yet exist for Berlin. “We are working with the Senate and the Berliner Wasserbetriebe on this,” Seleem says. The Tempelhof-Schöneberg district is a key area. “The people there don’t know that they partly live in a ground depression and are therefore at risk," he adds. So far, hardly anything has happened. “But that was luck,” Bronstert says, “lives are also potentially at risk here.”

Prof. Bronstert and his team now want to find out what and where the threats are. What happens in case of 100 - 150 liters of rainfall per square meter and hour? Where does the water concentrate? How high is the flooding in which area? To answer these questions, they analyze large data sets and use statistical surveys. “These methods allow us to establish reliable and robust correlations between different features, such as intensity or duration of precipitation events as well as the impacts they cause,” Ayzel explains. “By developing models, we aim to understand the origin and evolution of heavy rainfall. For this purpose, we are using physics-based modeling approaches based on machine learning and deep neural networks.”

Ayzel and Seleem will also be involved in the next project, which will focus on predicting pluvial floods in cities. This time Würzburg is the research partner, in addition to Berlin. “In contrast to Berlin, there is a strong relief in the city itself and in the surrounding catchment areas with many vineyards. So, the water runs off much faster and more torrentially than in the lowlands,” Bronstert explains. Without slopes, the water cannot run off quickly in the lowlands, whereas in relief-rich areas particularly the valleys are at risk because they channel the water. “The water then rushes through the streets,” he describes. Together with the Technical University of Munich and two engineering companies – a start-up from Berlin and a hydroinformatics company from Aachen – the team wants to hit the ground running in 2022.

Dr. Georgy Ayzel studied hydrology at Moscow State University (Russia) und earned his doctoral degree at the University of Potsdam. Since 2019, he has been research assistant in the BMBF-project CARLOFF.
Mail: ayzeluuni-potsdampde

Omar Seleem studied engineering and water resources management at Cairo University (BA) and at Ehime University, Japan (MA). Since 2019, he has been writing his doctoral thesis in the working group Hydrology and Climatology of the University of Potsdam under the supervision of Prof. Bronstert.
Mail: seleemuuni-potsdampde