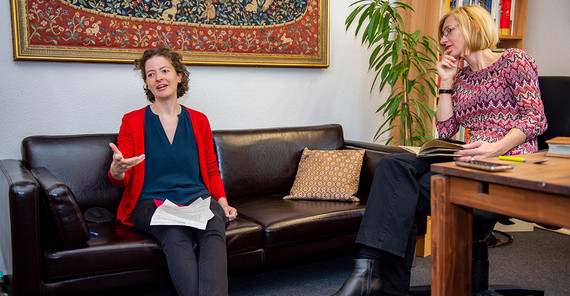 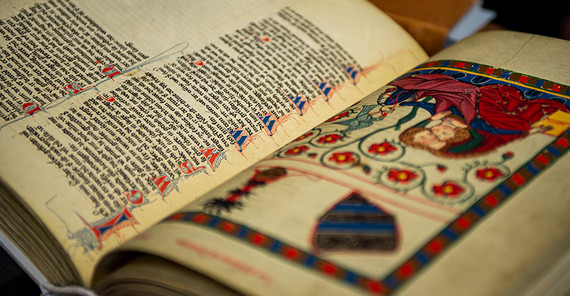 When you open the door to Katharina Philipowski’s office, you seem to enter into a different time. Early modern portraits and reproductions of impressive medieval manuscripts adorn the walls of the cozy room on the Neues Palais campus. A large red and gold tapestry depicting an allegorical scene hangs above the brown leather sofa: a lady takes a nibble from a plate handed to her by a servant. A unicorn and a lion are sitting by her side, a monkey at her feet is eating something. The tapestry, a replica of the 15th century Millefleurs tapestry “The Lady with the Unicorn”, figuratively represents an abstract concept, namely the sense of taste.

Allegories like these play a major role in the research project “I – Minne – Allegoric”. Katharina Philipowski, Professor of Medieval German Studies, and her research assistant Dr. Julia Rüthemann investigated two Middle High German and two Old French texts from the 13th and 14th century. These are medieval poems written in the first person, which deal with courtly love poetry and use allegories. “This type of text can be found throughout Europe,” Philipowski explains. “On the basis of the four selected texts, we did a kind of deep drilling.”

Courtly Poetry – in the Middle Ages, this was the serving love of a knight for a courtly lady. The roles between men and women are clearly allocated here. All four poems revolve around love, or more precisely, the right way to love. In Johan of Constance’s “Minnelehre” from the early 14th century, the first-person narrator is suddenly overcome by love for a woman and falls into a deep sleep. In his dream, he meets allegorical figures: Cupid, who appears naked with torches and a spear, and Minne (Courtly Love) with bow and arrow, which she then uses:

She drew her bow of horn and shot me in my heart, so that the arrow hurt me and I became even more fond of my dear lady than before.
As the voice of his heart, Minne explains to the “I” from now on what it has to do to conquer the beloved. The “Frau Minne” (Lady Minne) thus stands for the knowledge of love; she helps him to implement the doctrines of courtly love. First of all, the “I” is supposed to write letters to the beloved, which it promptly does after awakening. The courtship finally goes so far that “Frau Minne” asks the I to overpower the beloved lady, and again the I obeys.

Even if such scenes are not exactly typical of courtly love poetry, courtship can certainly be aggressive, Philipowski explains: the point is to reduce the lady’s shame and win her favor. But this is done primarily through language. “Courting is writing poetry is loving,” says Rüthemann. The art of love is something objective, something that can be described as a doctrine. And the art of love involves not only putting love into words, by writing letters, for example, but also putting one’s whole life at the service of courtship, promising one’s beloved absolute fidelity and never relenting in one’s efforts to love.

The journey is the reward

Medieval courtly poetry, however, is not about individual feelings of love as was the case later in Romanticism or in today’s literature. The works are rather love instructions that apply to every lover. "The ‘I’ is a hollow form, a sleeve into which the recipient is supposed to slip,” Philipowski explains. “The love that I feel is love as such; it is universal and not subjective.“

In “The Hunt” by Hadamar of Laber, also from the 14th century, courtship is allegorized in the form of a hunt. The “I” goes out into the forest with four dogs to kill a deer. The dogs are again personifications: their names are “herze” (heart), “triuwe” (loyalty), “fröide” (joy), and “stæte” (constancy). In the forest, the “I” first meets other characters, with whom it holds dialogs about the nature of love – especially about what to refrain from in courtship: the lover must not be dishonest or inconsistent, for example, and must not participate in gossip at court. Ultimately, the dogs track down the deer, which stands for the courtly lady. In the process, however, the dog “heart” is injured. The hunt is not finished. For courtly love poetry, it is mostly: The journey is the reward.

In the Old French novel “Romance of the Pear” by Thibaut from the 13th century, the first-person narrator meets a lady under a pear tree, who bites into a fruit and then hands it over to the lover.

Into the pear I bit without hesitation; if I had thought before of the power that was in it, from which I have since experienced much suffering, I would never have taken it.
“The text frames this scene, where the breath of the “I” blends with the lady’s breath,“ Rüthemann describes.

In the fourth and final text, Guillaume de Machaut’s “Judgment of the King of Bohemia” from the first half of the 14th century, an “I” recounts overhearing a conversation between a knight and a lady. They were debating who suffers the greater heartache: the knight, who has been betrayed by his mistress, or the lady, whose lover is dead. The “I” finally proposes the King of Bohemia as the judge. In conversations with personified allegories, the king finally decides that the knight is right.

Such courtly love poems, just like the courtly love songs, were disseminated primarily through oral performance: “Singers and musicians recited them at festivals before a courtly audience. In any case, that’s how it is depicted in books that have been passed down to us,” Philipowski explains. “They conveyed knowledge about courting but also moral concepts. So courtly love poetry also had a didactic purpose? “There is a theory that high courtly love poetry was intended to quell savage wars at court,” she explains. But Philipowski is skeptical whether the nobles were really tamed by and submitted themselves to literature. And then, as now, the line between fiction and reality was clearly drawn: What was true in poetry could be quite different in reality. “It’s more of a literary, an intellectual game.” The poems raise sometimes ironic “courtly love questions” such as: May a lady reject a lover simply because she is married? Should the lover choose the lady’s upper or lower half? “It is about self-assurance of courtly values, for which the aristocratic woman is a projection screen,” Rüthemann says.

First-person narrator then and now

The literary scholars have also considered whether the texts in the first-person perspective that they studied could be precursors of contemporary narratives, which often use the first person. The researchers are certain that there is a connection between the first-person perspective, allegory, and the discursiveness of the medieval texts, i.e., the fact that more is spoken than told, because the dialogs that unfold on the theme of love dominate all the works they studied.

“The concept of the “I” was very different from the one in the 21st century,” Philipowski explains. “Today, first-person narrators in literature speak of themselves, understand themselves as unique." Medieval literature, on the other hand, was about universal emotions. “The boundaries of the “I” were more open, or perhaps nonexistent,” Rüthemann says. In Dante’s “Banquet”, for example, the author comments on literature and declares that it is indecent to speak of oneself – unless one does so to serve others. “No author of the 21st century would think of something like this,” Philipowski says.

But then why is there an “I” that speaks to the recipients at all? “The experience of love, nature, or poverty is more direct that way,” Philipowski says. “And so is the transmission of knowledge.” The same applies to the dialogs and the allegories, which create a closeness to the recipients with their metaphors. Rüthemann also sees the first-person form as an opportunity to reflect on poetry itself. “The first-person narrator stages him or herself as the poetic “I” and thus reflects his or her authorship,” she says. “Yes, this is about an aesthetic claim to validity, in the sense of a mastership,” Philipowski adds. “It is not about creating something unique, but something in which the recipients find themselves.”

The researchers will publish the results of their research project with the University Press of Florida  and in the online journal “Beiträge zur mediävistischen Erzählforschung”, a German-based interdisciplinary journal dedicated to research on Medieval narrative. The literary scholars hope that the English-language publication will reach a larger audience in Europe as well, so that they can learn more about this type of text as a European phenomenon of the Middle Ages. Similar poems, after all, can also be found in Italian, Spanish, and English literary history – and not only on the subject of courtly love, but also spiritual texts or philosophical treatises used the first-person narrator, dialogs, and allegories.

But what about loving women in the Middle Ages? Were there also love instructions for the courtly lady? Rüthemann, who wrote her dissertation on the motif of the heart in medieval literature, will build on her previous findings in a new research project. It will take her to Paris as a Feodor Lynen Fellow at the Centre de Recherches Historiques. There she will research “Female Authorship in Allegorical First-Person Narratives” using the example of Christine de Pizan and Hadewijch of Antwerp.

Dr. Julia Rüthemann studied German philology and biology for teaching at secondary schools in Göttingen, Besançon, and Lund as well as medieval studies in Toronto. She earned her doctorate at the University of Mannheim in 2017.
Mail: julia.ruethemannuuni-potsdampde