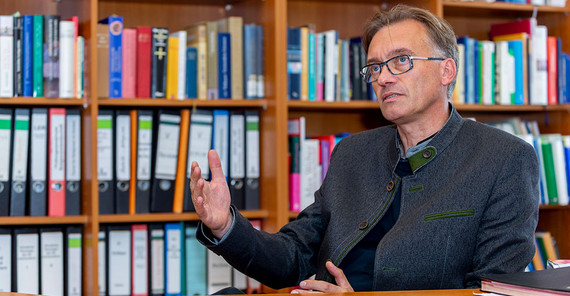 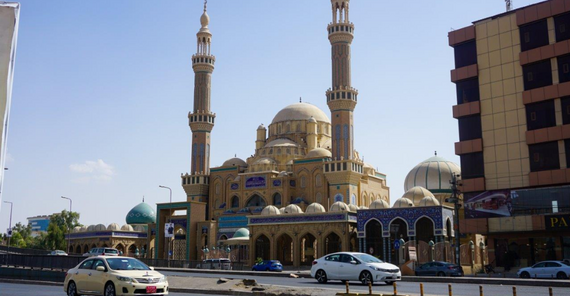 Three researchers and nine students at the Department of Jewish Studies and Religious Studies of the University of Potsdam set off to Iraq at the end of September 2021, to the Autonomous Region of Kurdistan, to be exact. In its capital Erbil, a special kind of scientific mapping was on the agenda: In the “Religious Mapping Erbil” project, the Potsdam researchers, together with local partners, are recording and documenting religious diversity in one of the oldest continuously inhabited settlements worldwide. Matthias Zimmermann talked to the project director, religious studies scholar Prof. Dr. Johann Hafner, about the goals and pitfalls of the project as well as about how such a map can be read.

What is the project goal of “Religious Mapping Erbil”?

Erbil has always seen lively migration due to its location between the Ottoman, Persian, and Arab empires. But in recent years migration has increased. Many people came there from the south, from Baghdad because of the pressure on religious minorities, from Syria fleeing the “Islamic State” (ISIS), from the Nineveh Plain, about which there are disputes between central Iraq and Iraqi Kurdistan. We wanted to find out which different religions exist in Erbil and how active their believers are. This includes Islam, of course, starting with the 304 mosques which exist in the city according to the Ministry of Endowment and Religious Affairs. Our Iraqi colleagues said there wasn’t much to see, that the same prayers were being said everywhere. We doubted that: There are mosques attended by the rich and those attended more by the poor, there are more progressive and very conservative, politically involved and apolitical ones ...
In addition, there are about 15 different Christian denominations, including the very old, ancestral ones – the Armenian, the Chaldean, the Syrian Orthodox, and the Apostolic Church of the East. They were present long before Islam, since the 2nd century, and have the same theological standing as the Roman Catholic Church in the West. Until today, each of them has its own “pope” called Catholicos. Due to western immigrants, free churches such as the Methodists, Evangelical congregations, and a parish with the Latin rite have also emerged. These Christianities still had 1.2 million believers in Syria and Iraq ten years ago. Now they have shrunk to 200,000. Their imminent disappearance would be a dramatic loss of culture. They have their own liturgies, their own canon law, and magnificent prayers. In addition, there are Mandaeans, a pre-Islamic religious community of Gnostic origin, the neo-Zoroastrian movement, and also a small Jewish group who, like the Baha'i, meet only privately. The project is intended to document this religious diversity. By the way, the Yazidi, several thousand of whom had fled to Erbil from ISIS, were not to be found. Since they are religiously oriented towards a sanctuary in their tribal area, they did not establish religious communalities in exile....

How did the research trip to Erbil come about?

It is part of the project “Religious Diversity in Northern Iraq,” which is funded by the German Academic Exchange Service (DAAD) and in which we are cooperating with three universities in Erbil: Tishk University, the Catholic University, and Salahaddin University. We want to show the students that another Christianity, besides the Catholic and the Reformed one, exists. In addition, we wanted them to get to know the local religious diversity beyond these. By the way, this also applied to our three cooperation partners as they did not know each other and their respective religious backgrounds. Many Muslim colleagues had never been to a church, and the traditional Christians had never been to an evangelical place of worship. Since Iraq hardly appears on the map of scientific cooperation, the DAAD welcomed our project very much.

We wanted to find out certain things about the religious communities: What is the structure of the congregation? How many employees and volunteers are involved? How active are their members, i.e., who comes when, how often, and what for? What annual celebrations do they hold? How are worship services and other religious practices conducted? To account for all this, we set out to visit as many as possible. Two years ago, at the beginning of the project, we already selected representative samples for this purpose because we can definitely not, for example, visit all mosques. Our local partners already described 50 communities over the past months. During our visit, we continued and completed this preliminary work in order to evaluate and process it afterwards.

How exactly did you go about it?

We formed mixed German-Iraqi groups of two and set off to mosques and churches that we had chosen before. We conducted participant observations in services and talked to representatives of the congregations and to believers on the basis of an interview guide. I myself was in one of the strict mosques. Fun fact: The imam there gestured and shouted for 20 minutes during his sermon so that I thought he was calling for jihad. According to my translator, the sermon was about forgiveness, gentleness, and humility, saying that these were practiced much better in European countries. When I asked how style and content match, they explained to me that a good sermon - following Muhammad’s example – should be so impulsive that the imam’s jugular veins swell.

How do you want to present Erbil’s religious diversity?

We have written down all the collected information according to a previously determined pattern and entered it into a database, which forms the basis for a website. Its core consists of a map of Erbil with symbols indicating the location of the mosques and places of worship and brief descriptions of each congregation visited. The long versions and scientific analyses will be compiled into a book to be published in 2022. It is particularly interesting for me that we want to use the surveys to find out how high the level of religious activity really is in Erbil. Based on our sample with concrete data on how many believers attend prayers and services, we can make well-founded estimates of how active which religious groups actually are. This, in turn, will allow us to draw conclusions about the degree of secularization. But this evaluation will take some more time.