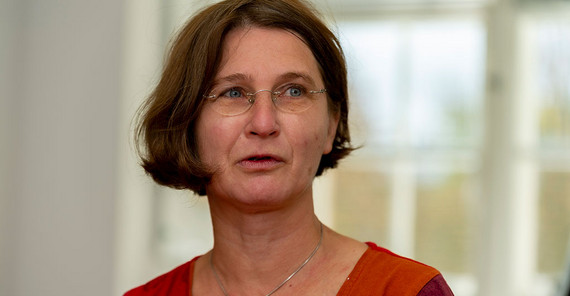 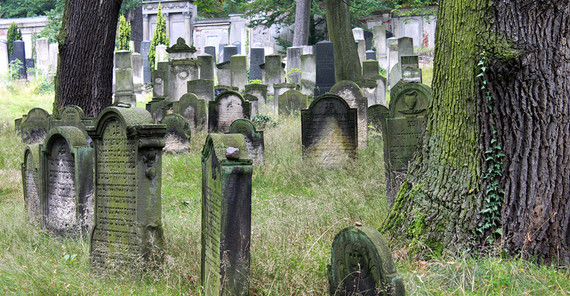 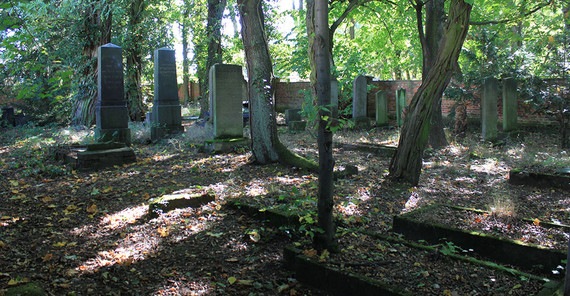 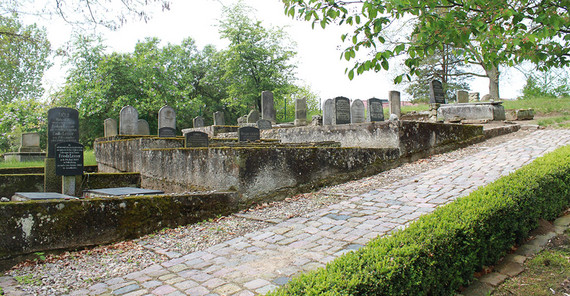 Jewish cemeteries are among the oldest places of remembrance in many regions – including in Brandenburg. But after the widespread expulsion and eradication of Jewish communities during the Shoah, many of them fell into disrepair. In some places, headstones were defiled or destroyed, and most sites sank into a deep sleep and were forgotten over the years. Researchers and students of the Chair of Modern History, with a focus on German-Jewish history and led by Anke Geißler-Grünberg, have been trying for a long time to make the cemeteries accessible and document them – and thus save them from falling into oblivion. A database gathers information on the cemeteries, the associated communities, and each individual headstone. Since 2019, cemeteries in western Poland have also been included thanks to a joint project of the University of Potsdam and the European University Viadrina Frankfurt (Oder).

Laura Hartwig , daughter of Jakob Dobrisch, was born on March 13, 1859 and died at the age of 68 on August 21, 1926. Her grave is located on the Jewish cemetery in Schwedt/Oder. On her headstone, which is decorated with a Star of David, are a German and a Hebrew inscription. Both texts, explanatory comments, a photo of the headstone, information about the grave and details about its location are recorded in the database “Jewish Cemeteries in Brandenburg”. The data set on Laura Hartwig is one of about 1,850 that have been compiled in the project so far.

From Potsdam to Brandenburg

“It all began in 2002 with a seminar on Jewish cemeteries”, says Dr. Anke Geißler-Grünberg, who coordinates and chairs the project “Jewish Cemeteries in Brandenburg” and has been involved from the very first day. “There were three of us, including our lecturer. Since my first day at the cemetery in Potsdam, the topic has stuck with me.”

The Jewish cemetery in Potsdam is not only the largest in Brandenburg but is also home to the oldest preserved burial sites in Brandenburg, dating back to the 18th century. In 1999, it was declared a World Heritage Site by UNESCO. Above all, it is an invaluable source for research into Potsdam’s German-Jewish history, emphasizes Geißler-Grünberg. “Due to its age and size, you can trace the development of the Jewish community since the 18th century. The design of the graves clearly shows how the Jewish community, initially a segregated minority, gradually integrated into Potsdam’s urban community and, to some extent, was absorbed into it.” At some point, for example, simple headstones with German inscriptions took their place alongside the traditional ones, he says. “At the same time, it’s obvious that the people maintained their Jewish identity and proudly displayed it here on the cemetery."

First clearing up, then documenting

Even though not all Jewish cemeteries in Brandenburg are as large and well preserved, each of them tells its own story – about the people buried there and the places where they had lived and worked. One seminar turned into two, three activists became ten, and at some point Geißler-Grünberg and her teammates – among them Judaist Brigitte Heidenhain and Assistant Professor of Religious Studies and Jewish Religious History Nathanael Riemer – decided to go about the task and document the burial place historiographically. “We wanted to tap into the cultural heritage that, so to speak, lies dormant on our doorstep,” the historian says. No trivial matter, as even initial research showed. After all, there are about 60 Jewish cemeteries in Brandenburg. Some are well preserved and maintained, while little more than a notice board remained at others. “But that didn’t scare us. We wanted to discover all of them.” The team members rolled up their sleeves, got to work, and set out into Brandenburg. Individually, in groups, sometimes accompanied by local residents, sometimes equipped only with a map, Geißler-Grünberg and the other activists traveled through Brandenburg: to Biesenthal, Fürstenwalde, Perleberg, Schwedt, and Wriezen. They recorded all the data that could be found on site. Every headstone was photographed. “We often had to set them upright and clear them of moss or weeds before anything could be read at all,” she explains – cemetery maintenance and historical scholarship hand in hand. “That showed us: Time is running out. The cemeteries are decaying, the headstones are weathering, and in some places there will soon be nothing left for us to record.”

Whenever possible, more information was collected on site: about the cemetery, the community, individual graves or persons. In some places, a trip to the city or nearest district archive as well as dedicated local chroniclers helped. “It is sometimes a long journey for very small pieces of history,” she says. “Because where do you find traces of those who leave no trace? But sometimes they later turn out to be very important to someone.” Back at the university, they started the second, very time-consuming part of the work: arranging all the photos and available information, deciphering and translating inscriptions, evaluating sources and finally systematically working through cemetery after cemetery. “We want to enable interested people to ‘visit’ the cemeteries without being on site,” Geißler-Grünberg explains. For this purpose, they located site plans or created some themselves and assigned photos of the stones to the graves marked on them, as well as all the data on the buried people. Thanks to the support of what is now the Center for Information Technology and Media Management at the University of Potsdam, a database was created for the growing archives, which went online in 2008. You can now virtually visit 23 Jewish cemeteries in Brandenburg from Beelitz to Wriezen. A history of the community and the cemetery can be found for each one, along with a description and plan of the site and data records with all the information that has been compiled on the registered gravesites. Hebrew inscriptions, their translations into German and explanations, data on the lives and families of the buried people, even information on the size, composition, and decoration of the headstones. With the help of the alphabetically sorted occupancy lists, visitors can look for individual persons or “wander” the cemeteries. Thanks to a detailed search function, however, it is also possible to search for specific biographical data, inscriptions, and much more – both for individual burial grounds and for all the gravesites recorded to date.

The project is well received

A job that pays off, as the historian proudly reports. Time and again, people who are looking for ancestors and relatives come across the project. Local historians and people interested in history also use the database. “Some time ago, a researcher from Abu Dhabi contacted us who was researching a doctor from Charité hospital and found what he was looking for on our website.” Sometimes, she says, she can help in providing contacts or literature, sometimes not. And the project is bearing fruit in other ways, too. Several times the work on the cemeteries has led to cooperation with schools. For example, under the guidance of Anke Geißler-Grünberg, students of the Humboldt-Gymnasium in Potsdam spent a semester researching the cemetery in Potsdam.

Even though the mammoth project of including all Jewish cemeteries in Brandenburg in the database has not yet been completed, a new one has already arisen from it: Since 2019, cemeteries located in Western Poland have been recorded in a project based at the European University Viadrina Frankfurt/ Oder. “The project lays important foundations for further research into the history of German Jews in the territories that have been Polish since 1945, and thus closes a research gap that arose after 1945,” says Dr. Magdalena Abraham-Diefenbach, head of the project at Viadrina. In Poland, too, the team found records of areas that have been cleared, overgrown fragments, and closed burial sites. And again, Geißler-Grünberg is traveling with colleagues, from Germany and Poland, from place to place searching traces of Jewish life. “In September 2021, we recorded a cemetery in Trzemeszno Lubuskie, formerly Schermeisel, together with Polish and German junior researchers,” she says. “The site was so overgrown that we first had to restore it together with activists of the association Action Reconciliation and the Polish Forestry Office of Sulęcin before we were able to document anything.” Again, it was necessary to mow tall grass, clear brush, free headstones from moss and sand so that the inscriptions could be read. Very many headstones had to be set upright again. For the 25 recorded cemeteries on the Polish side, a second database was created following the example of the first one and linked to it. There is also an interactive map on which all the cemeteries are located. “For Jewish Studies at the University of Potsdam, this German-Polish cooperation across the bridge of the European University is a stroke of luck,” says Prof. Dr. Thomas Brechenmacher, Professor of Modern History (German-Jewish History) at the University of Potsdam, who is responsible for the project there. “It is a decisive step on the path to recording the remnants of the rich Jewish life throughout present and former Brandenburg that are in danger of disappearing. This is achieved by the collaboration of monument studies and historical science.”

Anke Geißler-Grünberg could not let go of the cemetery that started it all. After graduating, she got to know and love the site during an internship at Potsdam’s Lower Historic Monuments Protection Authority. She has since turned her passion into a profession and conducted scientific research on the cemetery for her doctorate. “The focus, as with the other cemeteries, is on documenting the gravesites,” she says, “except that in this case, this turns out to be a lot more extensive than with any of the other cemeteries.” It also includes a history of the community and the cemetery. The researcher also looked at how the development of the community is visible in the structural and artistic design of the headstones. “And I was interested in how today’s urban society deals with this heritage. In fact, it is seen equally as a burial place, authentic (cultural) historical evidence in the townscape, an accusatory monument, and as a place to which a romantic charm is attached.”

Dr. Anke Geißler-Grünberg studied at the University of Potsdam from 2002 to 2010 and also earned her doctorate there in 2021. She was research assistant at the Chair for Heritage Science of the European University Viadrina in Frankfurt/Oder until the end of 2021.
Mail: angeiuuni-potsdampde

The German-Polish documentation project “Jewish Cemeteries in Poland on the Territories of the Former Province of Brandenburg” was funded by the Federal Government Commissioner for Culture and the Media and conducted at the Chair of Monument Studies of the European University in cooperation with the University of Potsdam, the Jagiellonian University Kraków and Museum of the Meseritz District in Międzyrzecz. The work was supported by Polish museums and monument offices, members of Action Reconciliation from Berlin, and many voluntary amateur historians. Since November 2019, headstones and cemetery structures have been documented at 20 Jewish burial sites in the historic province of Brandenburg, which have been Polish since 1945. The cemeteries are among the few material legacies of Jewish life in the border region.