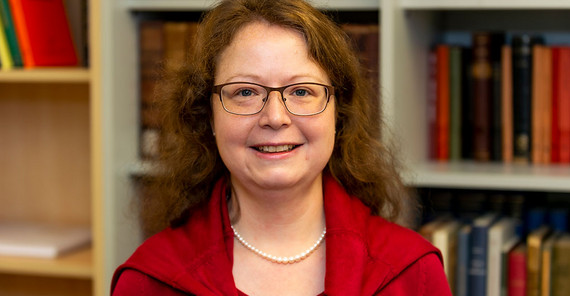 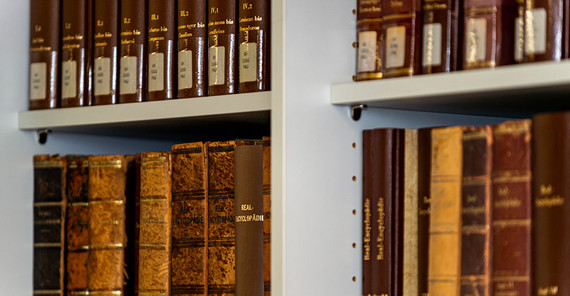 Dr. Hedwig Schmalzgruber already discovered her passion for ancient languages and texts in Latin class as a school student. Later, she herself taught German, Latin, and Greek at a secondary school in Passau before turning her back to school teaching and fully immersing herself in research. In August 2017, the philologist came to the University of Potsdam to write her habilitation, in which she analyzes collections of Latin and Greek fables in verse form.

“If I had a spacious estate in Brandenburg, I would keep goats. I love goats,” Schmalzgruber says excitedly. “They’re funny, strong climbers, have character, and they are useful.” After a short pause, she surprises with an afterthought. “And I also like their smell.” That she would research animals in ancient fables was not part of the plan though. She had initially wanted to analyze fables in relation to gender studies. When she brought the topic along with her from Wuppertal, where she had received her PhD and worked as a research assistant, her new boss in Potsdam advised her to choose a less polarizing approach for the habilitation work. “And so I thought: What is innovative?” When searching for a suitable topic she came across the so-called “Human-Animal-Studies” (HAS) and decided to use this method in classical philology. “Applying the animal perspective to fables is pretty novel,” the researcher says. “So far, people have asked what lessons can be drawn from fables or what the animals symbolize. To adopt the perspective of the animals in order to better characterize their relation to humans is a productive impulse for research,” she emphasizes.

Returning to academia as a teacher

Hedwig Schmalzgruber grew up in an Upper Franconian family of teachers. She first studied Latin and German in Erlangen to become a teacher. Later she added Greek. After more than five years as a teacher at Bavarian secondary schools she realized that she would not find happiness at school, “because I wanted to examine texts for their content and from a scientific perspective.” The decision to return to research was not an easy one, as she remembers. She had to give up the security of the teaching profession and leave the civil service. “But I stayed my course,” the literary scholar recounts, and her eyes light up. At the University of Wuppertal, Schmalzgruber wrote a PhD thesis on a Latin bible epic from the 5th century, in which the Old Testament is told in hexameters. Her doctoral thesis has by now inspired more studies, “a milestone in research,” she says, not without pride.

Animals and humans in ancient fables

In 2017, she joined the chair of Classical Philology at the University of Potsdam as a research assistant. In her habilitation project, she researches “Human-animal relations and human-animal boundaries in ancient fable collections.” For this work, she selected two writers of fables: the relatively well-known Latin poet Phaedrus from the 1st century AD and the unknown Greek author Babrius, who probably lived in the 2nd century AD. Schmalzgruber examines these texts regarding the forms of interaction between human and animal and how both communicate with one another. In addition to these central questions, Schmalzgruber looks at relations and power structures. “Are relations shaped, for instance, by exploitation for economic gain, or does emotional care play a role?” The philologist was surprised to find that the authors show a real interest in animals. “In one fable, Babrius describes in detail the day-to-day life of a donkey who carries heavy loads and fulfills its role as a working animal, to the point of really empathizing with the donkey. “This makes clear,” she explains, “that the donkey wants to be treated by his master as a kind of puppy dog. The donkey yearns for love and affection, escapes from its stable, runs to its master’s room, and throws itself at him.” In the end, this leads to a panic, and the donkey is struck dead. To Schmalzgruber, this text speaks volumes.

“Or an old widow keeps a sheep,” she recounts another of the poet’s fables. “She wants to get as much wool as possible from her sheep. But she positions her shears so close to the skin that she injures the sheep.” The animal then raises its voice: “If you want my meat, please call a butcher. He will know how to do it right. If you only want my wool,” the philologist summarizes, “then call a shearer. He will know how to use the tool.” One of her favorite fables, as Schmalzgruber stresses. “On the one hand, I think it is striking how the sheep demands proper treatment as an animal. On the other hand, the sheep does not doubt that it is meant to serve the widow.”

As a cultural ambassador in science

This foreshadows notions of animal welfare. And the example also shows that women often look bad in ancient fables. “They treat their animals roughly and without consideration,” Schmalzgruber explains. Her voice hints at the relief of not having pursued a gender studies approach. “My current approach of an animal perspective is multifaceted and complex,” she summarizes. “The gender question would not have been as rich.”

Dr. Hedwig Schmalzgruber hopes to finish her habilitation by summer 2022. “I want to stay in academia, research is my passion,” she makes clear. But, besides research, she is also on another mission. “Latin must not disappear from our curricula,” she urges with a view to our cultural heritage. “Research on the corona virus, at the moment, is of course more important than a study on ancient fables. But in the long run, we must take care not to sever the roots to our culture, of which Latin is a part.”

Dr. Hedwig Schmalzgruber studied Latin, German, and Greek at Friedrich-Alexander-Universität Erlangen-Nürnberg. She has been a research assistant at the chair for Classical Philology at the University of Potsdam since 2017.
Mail: hedwig.schmalzgruberuuni-potsdampde