A Question of Stance – How do you react to antisemitic remarks in the classroom or to racism among students at school? A model project provides answers. 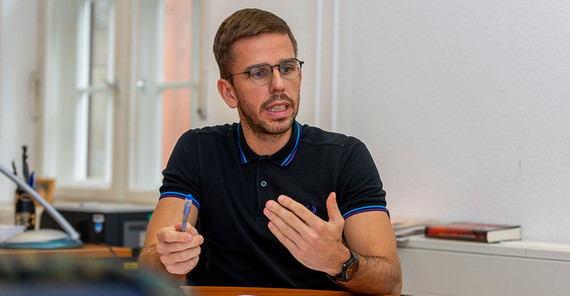 Discrimination and right-wing thinking do not stop at classroom doors. It is an enormous challenge for teachers to respond to them adequately. A model project at Brandenburg's vocational schools supports them on this issue. Using concrete case studies, teachers work through conflict situations in a peer consulting group and as well as with researchers, and learn how to deal with them.

Discrimination has many faces. Sometimes it manifests itself in insults such as “You dago!” or “You bull dyke!”. But often, much more subtle statements show: This person has anti-democratic and discriminatory views. For example, when someone alludes to a Jewish world conspiracy or makes derogatory remarks about disabled people. The insults and attacks are often directed at fellow students but also at teachers or specifically at certain population groups. But no matter what form it takes: When anti-Semitism, racism, sexism, or homophobia show up in classrooms and schoolyards, teachers are needed – and often overburdened. “At that moment, you know that you have to react to it somehow and very quickly,” social scientist Udo Dannemann tells us. But the question is how.
He himself knows the daily school routine as a teacher inside out. After completing his teacher training, he taught politics and mathematics at schools in Lisbon and Berlin. It was here that he was confronted with difficult situations for the first time, in which individual students made anti-democratic statements. Udo Dannemann remembers, for example, when he dealt with the topics of flight and migration in class. During the discussion, a student said that not every refugee boat in distress had to be rescued. Another time, a student claimed that it was completely justified for women to earn less than men. After all, men work harder. “That can really throw you off balance,” Dannemann says.

Discrimination is a nation-wide problem

The most important thing in such a situation is to show a clear stance, the researcher explains. “But sometimes it’s not easy to identify anti-democratic or discriminatory positions as such,” he admits. The “Strong Teachers – Strong Students” project addresses both issues. On the one hand, its goal is to sensitize teachers at vocational schools to forms of discrimination and conspiracy myths, and on the other, to teach them how to respond to these.

Twelve of Brandenburg’s 25 vocational colleges have applied to participate in the project. “This shows how great the need is,” Dannemann emphasizes. “Racism, sexism, and other forms of discrimination are nationwide problems.” The researchers finally invited six vocational colleges to participate. Each school is now sending three to four teachers who will receive further training in the model project for three years and can practice dealing with discrimination and extreme right-wing and right-wing populist attitudes and positions.

The project specifically focuses on vocational schools because this type of school, where most students in Germany learn, is rarely part of model projects. In addition, “The subject of civic education has a comparatively difficult time at vocational schools and is often taught by teachers who are not trained in the subject,” Dannemann explains. The content of the subject is not on the exams. In general, the students at the vocational schools are very diverse, and right-wing and anti-democratic tendencies are particularly common.

“This is becoming more visible again today,” the researcher explains. Whereas in the 1990s the problem was mainly seen in violent conflicts, at present there is more psychological violence, insults, and a latent hostility to democracy. “It’s much more difficult to react to something like that than to a row, for example,” Dannemann says. “Strong Teachers – Strong Students” is intended to be one of many possible responses to this development.
A previous project of the Technische Universität Dresden and the Robert Bosch Stiftung already took place in Dresden from 2015 to 2018. It focused primarily on right-wing extremism as a form of hostility to democracy. A second model project followed in Lower Saxony, and now a third in Brandenburg. This time, the researchers are looking at antidemocratic positions and attitudes in general, taking into account the societal, economic, and social causes of such thinking. Dannemann argues that anti-democratic positions and attitudes can only be adequately addressed if the teachers involved are trained in sociology and political science.

For many teachers, the workshops are probably the first opportunity to talk intensively with others about their experiences with anti-democratic incidents at their schools. There is hardly any time for this in the packed daily school routine. They can talk, ask questions, and use concrete case studies to try out which strategies help in certain situations. One pillar of the program teaches teachers how to manage conflicts properly or to take part in argumentation training. A second pillar sensitizes teachers to recognizing discriminatory and anti-democratic positions as such in the first place.

Networking as a key to success

“The first six months are spent on just generally recognizing the problems,” Dannemann explains. Sometimes teachers come to the workshops convinced: “Anti-democratic attitudes? Those don’t exist here.” When we then talk about it in more detail and give examples of forms of discrimination, they are surprised: “Yes, we know that, too.”

Therefore, they initially deal with the question what anti-democratic attitudes there are and how they can be recognized. What ideologies are behind them and how can they be explained in sociological terms? “No teacher can learn this on his or her own and in their free time,” Dannemann emphasizes. Particularly in the case of statements merely alluding to something, however, knowledge about these things is important to be able to assess the situation and enter into a discussion with the students. Tact and sensitivity are needed. Sometimes a cautious discussion in which facts, motivations, and backgrounds are discussed can be more effective than staking out a clear-cut position. But sometimes it’s the other way around. Often, this becomes a tightrope walk for the teachers.

The peer case consultation is another important aspect of the project, which relies on external consultants from the Brandenburg Regional Office for Education, Integration and Democracy (RAA). The RAA has been supporting schools with specific problems since the 1990s. In the model project, the consultants visit the participating schools five times a year and provide teachers with assistance on current cases in a small, protected space. This regular, professional support is highly appreciated by the schools, says Dannemann. The counselors, in turn, are supported by training measures within the model project as well. Networking workshops also strengthen the bridges between schools and extracurricular associations, initiatives and foundations in order to channel the available expertise to where it is needed.

The experiences from the previous project in Saxony show: Teachers who have gone through the model project feel more confident in dealing with anti-democratic positions, are better able to assess situations, and are capable of taking action. The Brandenburg project is also being scientifically evaluated. Before and after the workshops, the research team surveys the teachers’ level of knowledge about anti-democratic attitudes, what they perceive as particularly helpful, and how their confidence in arguing and taking action has evolved. A team from the University of Eichstätt, which accompanies the workshops, is also evaluating all current project locations with questionnaires and group interviews.

Shift in discourse to the right

The project in Brandenburg has only just begun. But for Dannemann, one thing is already clear: “It won’t be over after three years.” Statements that violate human rights are not only found in school but increasingly in the wider society. Anyone who disagrees with such positions is quickly seen as an opponent of freedom of expression. Researchers have actually been observing a shift in discourse to the right for several years now. Extreme right-wing positions are gradually becoming acceptable in the “middle of society”. “What does that do to the values and norms of a democratic society?” Dannemann asks. “What is happening right now in everyday school life and how can we intervene? That’s something society and academia need to address in the long term.”

“Strong Teachers – Strong Students” is therefore intended to have an impact beyond the end of the project. Based on the project results, the researchers will develop modules for further training. They are going to publish a brochure with contact persons for the vocational colleges and a “toolbox”, as well as prepare a collection of analyzed case studies. Helpful structures that already exist at the schools are to be supplemented and strengthened. Because no one should be left alone with these problems, Dannemann thinks. He hopes that some of the project participants will become multipliers in their schools, helping their colleagues stand up to discrimination and anti-democracy in the future. “There is no patent remedy for this,” the researcher emphasizes. “But it depends on the stance you take or develop."

“Strong Teachers – Strong Students“ is a model project in Brandenburg that provides participating teachers with factual and methodological basic and background knowledge to be able to respond to discriminatory and anti-democratic positions at vocational schools. Besides the Chair for Political Education of the University of Potsdam, cooperation partners and funding institutions of the project include the Brandenburg Ministry for Education, Youth, and Sport (MBJS), the Federal Agency for Civic Education (bpb), and the Robert-Bosch-Stiftung (RBS).
Duration: 2021–2023
www.uni-potsdam.de/de/politische-bildung/1/modellprojekt-starke-lehrerinnen-starke-schuelerinnen-in-brandenburg

Udo Dannemann studied politics and mathematics for the teaching profession at the University of Oldenburg and the University of Bremen. He was a teacher in Lisbon and Berlin and is currently writing his doctoral thesis on socio-scientific education at school in the model project “Strong Teachers – Strong Students” at the University of Potsdam.
Mail: dannemannuuni-potsdampde