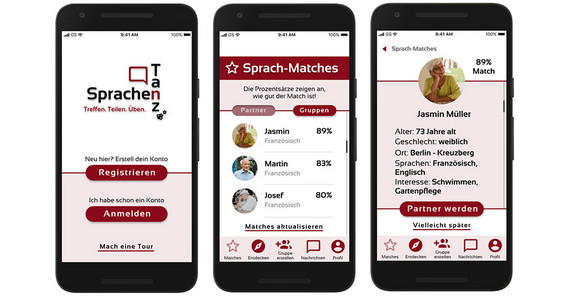 Birgit S. recently turned 70 and lives in Berlin-Charlottenburg by herself. The retired teacher misses the lively contact and exchange with her students and colleagues. Her daughter, son-in-law and grandchildren live in Frankfurt am Main, 600 kilometers away, and her husband died not long ago. Birgit has many interests and is physically and mentally fit. She has been reading the newspaper Tagesspiegel for decades and loves spending the weekends at a sailing club at lake Wannsee. With her stable widow’s pension, the former civil servant wants to travel, get to know foreign cultures, and learn new languages. But not alone. These, more or less, are the characteristics of the target group of a new mobile app. It is called „SprachenTanz“ (Language Dance) and is intended for people who no longer work but are still fit and who have an interest in language learning.

“We conducted a large-scale online survey to find out what senior citizens really want,” Prof. Harald Clahsen explains his approach. “The survey revealed that there are many people over 65 who have the time and desire to explore the world but who see their lack of foreign language skills, especially English, as a shortcoming. Even if they speak a foreign language, they are often not able to get enough practice.” Because the majority of today’s seniors—although they are not digital natives—actively use a computer or smartphone, researchers at the Potsdam Research Institute for Multilingualism (PRIM) at the University of Potsdam are currently developing a mobile app that can serve these special needs and interests.

The project “Digital Language Learning” aims to improve existing digital tools, with which one can learn and use foreign languages. Based on qualitative and quantitative research, linguist and project manager Clahsen and his team want to contribute to the development of new products in the field of mobile language learning. This is how the researchers came up with the mobile app “SprachenTanz”, a collaborative second language learning platform for older adults that promises “Meet. Share. Practice. Language Dance.”

Focusing on the needs of specific groups of learners and addressing these through digital solutions was met with great interest at Langenscheidt Digital and Babbel. The “Digital Language Learning” project was able to establish important collaborations with both companies. Together with Langenscheidt Digital – and the Design Thinking method – the team developed the product prototype and evaluated the app. Is it, in fact, suitable for elderly people to learn English as a foreign language? Could the app satisfy their requirements? And did it provide them with an authentic learning experience?

“To date, older people have been neglected by the digital language learning industry, even though they have an enormous interest in or even need for learning languages,” Clahsen says. “Existing apps are made for college students and teenagers. But we are asking: What do older people actually want?” The researchers’ most important finding is that the target group is currently missing a social or interactive component in existing products. That is why they used social platforms as a benchmark and matching tools for their purposes, to identify overlaps or intersections regarding personal details and interests and thus enable the successful learning of languages in real-life contexts.

“’SprachenTanz’ does not have a learning component like a language course,” Cecilia Puebla explains. The linguist has been part of the project since its beginning in 2018. “Rather, it is a platform that brings together people from various native languages on the basis of their general interests as well as their particular affinity to a certain language.” “SprachenTanz”, she adds, is also not a language tandem because users do not teach each other different languages. “They actually pursue a common hobby together – like going to a wine tasting or a sports event, and in the process they speak French!” Which means: “SprachenTanz” promotes learning a language in a real-life context. Users of the app create a language learning experience in a collaborative and social way. New users first set up an account and create an individual profile by answering questions about their biography and language level as well as hobbies and their motivation for joining. Subsequently, they are shown matches: other users with similar, suitable preferences and language interests. With the help of a filter function, users can also discover individual matches, for example based on languages, existing groups, or geographical proximity. “Basically, ‘SprachenTanz’ is Tinder for older people to learn languages,” Clahsen explains with a smile. Both aspects of the app – social contacts and learning a language – are equally important. While many people are looking for contacts as they get older, which the app can help them make, the learning component could actually benefit their health. After all, studies suggest that a multilingual daily life significantly counteracts senile dementia.

At the moment, feedback data of a group of older adults are being collected on the “SprachenTanz” prototype. Based on these, the team will develop a second prototype. Another four to five feedback loops are planned for the future. “Until our seniors say, it’s good as it is!” Clahsen says.

Langenscheidt was enthusiastic from the beginning, explains the researcher. The company helped the team at Potsdam develop “SprachenTanz” and, in return, was able to access the generated user data. A win-win situation and – for a while – a successful model for collaboration between science and the digital economy. Following an acquisition, however, Langenscheidt Digital was eliminated without replacement, and the DLL project at the University of Potsdam is also being phased out at the end of the year 2021. The focus “Digital Language Learning”, however, remains and will be continued by PRIM as part of a subproject of the Collaborative Research Center 1287, which conducts research on the “Limits of Variability in Language”.

Design Thinking is a method for product development, widespread in the industry and with special consideration for the needs and requirements of the end users. One crucial aspect of this method is that it involves a group of potential users during the entire development process to ensure the product actually has a benefit.

Prof. Harald Clahsen studied German, sociology, and mathematics at the Universities of Wuppertal and Hamburg. After almost 20 years as a professor for linguistics at the University of Essex in Great Britain, he came to Potsdam in 2011 as an Alexander von Humboldt Professor to set up the new Potsdam Research Institute for Multilingualism (PRIM)
Mail: harald.clahsenuuni-potsdampde

Cecilia Puebla studied Slavic philology and linguistics at Complutense University. She is currently a PhD candidate in the international program for experimental and clinical linguistics and part of the project “Digital Language Learning” at the Potsdam Research Institute for Multilingualism.
Mail: cecilia.puebla.antunesuuni-potsdampde