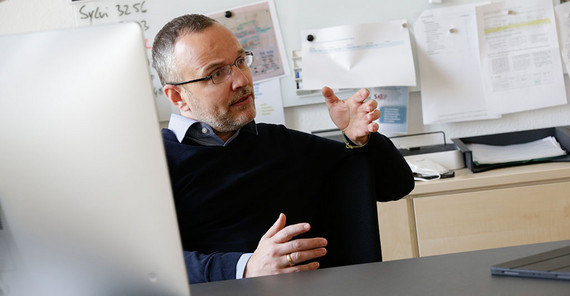 What are the most effective ways for policy makers to regulate the labor market? Does government aid during the Corona pandemic reach those who really need it? Does this aid actually help? How can you combine efficient climate and economic policies? How high is the gender pay gap and how can it be reduced? The Center for Economic Policy Analysis (CEPA) stands at the intersection of economic research and political practice. CEPA was founded in 2018 and is a think tank that pools socially relevant research and communicates it to the political arena. CEPA provides a network for researchers of the Faculty of Economics and Social Sciences at the University of Potsdam and external partners in Potsdam and Berlin. Above all, it introduces students to research early on and teaches them what scientific expertise can achieve.

“The Corona crisis has made us realize that continuing education and lifelong learning will become increasingly important due to the ever-changing demands on the labor market,” says Marco Caliendo. “At the same time, we know that some people systematically participate less in continuing education than others – even though they would benefit from it. Why is that?” Caliendo is an economist who researches questions like these  – questions also addressed by CEPA. Caliendo, who is Professor of Empirical Economics at the University of Potsdam, founded the center together with colleagues to combine research and teaching with transfer to the political and social field. The fellows include researchers from the faculty but also from other institutes in Potsdam and Berlin, such as the Potsdam Institute for Climate Impact Research (PIK), the German Institute for Economic Research (DIW), the Mercator Institute for Economic Research (Mercator), and the Berlin School of Economics (BSE). Some of them are jointly appointed professors at the University of Potsdam – such as Matthias Kalkuhl from the MCC, Katharina Wrohlich and Alexander Kritikos from the DIW, and Elmar Kriegler from PIK. “We pool our research qualities in an excellent but also competitive research environment of the metropolitan region,” Caliendo explains. “This also makes us more visible and attractive to students and doctoral candidates.” After all, they are just as important a part of CEPA as the senior members, who primarily include postdocs and professors.

They all share an interest in empirical research and socio-politically relevant issues. Like Marco Caliendo, most of the members have backgrounds in economics or related disciplines. For many years, Caliendo has been investigating the instruments that can support and steer the labor market. For example, he analyzed the impact of introducing minimum wages. Back in 2017, he and colleagues from the DIW were able to show that the minimum wage significantly raised low wages but that not all those who were entitled to it actually received it. In concrete terms, the introduction of a minimum wage in 2015 led to a 15% increase in wages between 2014 and 2016 for the 10% of employees with the lowest incomes. The researchers also calculated, however, that two years after the introduction of the minimum wage, up to 1.8 million workers were still earning below 8.50 euros per hour. “So the instrument works to the effect that it has given a boost to low wages,” Caliendo sums up. “At the same time, however, policy makers must ensure that the minimum wage actually reaches everyone who is entitled to it.”

Such an empirical project, which provides information about more than 44 million working people in Germany, becomes possible thanks to comprehensive surveys such as the Socio-Economic Panel (SOEP), the largest and longest-running multidisciplinary survey in Germany. “The fact that more and more data are being collected and made available in economic and social sciences has led to a small empirical revolution in economics in recent decades,” Caliendo explains. “Our goal is to provide empirical evidence for the scientific hypotheses that we develop.” Making science comprehensible, taking it from the spheres of theory into practice, is a goal shared by the researchers at CEPA, the economist says. And here, a direct path leads to the sphere of politics. After all, science can contribute to evidence-based policy making, i.e. using empirical data to prove which political measures are effective and which are not. This goal has been met with strong interest from the other side: The minimum wage project was developed in cooperation with the Institute for Employment Research of the Federal Employment Agency in Nuremberg and the SOEP at the DIW in Berlin.

CEPA takes this exchange to the university, for example with the “CEPA Policy Lecture Series”. Political and scientific experts are regular guests at lectures and discussions, such as most recently Stefanie Hiesinger from the Climate Cabinet of the EU Commission, Prof. Dr. Claudia M. Buch, Vice President of the Bundesbank, and Prof. Dr. Andreas Peichl, who is Director of the Center for Macroeconomics and Surveys at the Ifo Institute in Munich. “We want to give our junior members and students the opportunity to interact with political decision-makers and policy advisors. And to let them know how important such exchanges are – for both sides,” says Caliendo. After all, CEPA’s mission is not only to analyze and evaluate (economic) policy retrospectively. The center also wants to position itself as a scientific institution able to provide advice on the design of leading-edge political frameworks and programs. “With this approach, we want to help establish evidence-based policy-making as a tradition in Germany,” says Caliendo, who is CEPA’s spokesperson. In disseminating science, CEPA also aims to reach a wider public. “We know a lot about research and teaching, but when it comes to outreach, we leave our comfort zone,” Caliendo admits. “In fact, economics, which often involves quantitative work, can be visualized and communicated very well. In any case, we still see room for improvement, and there is a lot to do!”

The starting point and core objective of CEPA’s work, however, is to enter into a dialogue about research or even to initiate joint projects, for example at the weekly “Potsdam Research Seminar in Economics (PRSE)”, where all members regularly put their current projects up for discussion. It does not matter whether it is a doctoral thesis or a large third-party funded project. The “CEPA Flash Talk” is actually explicitly about presenting early-stage projects or initial ideas and collecting suggestions. “Of course, such formats are particularly useful for our junior members, who can practice giving presentations and are thereby able to decisively improve their projects,” says Caliendo. But the knowledge transfer does not only go in one direction. “Feedback is also extremely important for senior researchers.” To publish exciting results beyond CEPA at an early stage and make them accessible to a larger research community, a “Discussion Paper Series” was initiated, which is published by Universitätsverlag Potsdam. In this series, all CEPA members can publish working papers, which sometimes take two to three years to be published in economic journals due to the lengthy review process. “This particularly helps junior researchers’ visibility at an early stage. Sometimes this can be decisive for their further career path,” Caliendo says. In order to promote early-career researchers, CEPA is constantly developing new formats. In September 2021, already the seventh “PhD Workshop in Empirical Economics” will take place. In April 2021, a “Coding Bootcamp” was held, where practical examples demonstrated how to obtain big data through the computer-assisted reading of web pages.

Who invests in continuing education?

For some time now, Caliendo has been particularly interested in the motivation behind people’s decision to invest time and resources in continuing education. “In several projects, I am investigating so-called human capital investments, particularly the question of how people’s personalities influence their decision to participate in continuing education.” Skills demanded on the labor market are changing fast, and lifelong learning is now considered essential. And yet Caliendo and his team were able to show that not all people are equally willing to take part in continuing education. This is due to specific personality traits, for example the so-called locus of control. People with an internal locus of control believe that their own actions have an impact on their lives, i.e. that they have control over it. People who tend toward an external locus of control are convinced that external factors primarily determine their success or failure. Since the locus of control can be determined relatively well with the help of standardized questionnaires, the researchers were able to show that people with an internal locus of control are more likely to undergo further training. The reason for this is that they simply expect the benefits to exceed the costs. “Findings like these are, of course, just as important for HR managers as they are for job placement officers at the employment agency,” Caliendo explains. “Because these findings clearly show that personality types should be approached and supported differently when it comes to arranging continuing education.”

In a follow-up project, Caliendo is now investigating how the personality of managers responsible for the continuing education of their employees affects decisions about who is sent to training courses. As soon as the first results are available, he also intends to present them for discussion at CEPA.

The “Center for Economic Policy Analysis” was founded at the Faculty of Economics and Social Sciences of the University of Potsdam in 2018. It offers an attractive study and research environment. Its evidence-based research is embedded in the economic policy of the Potsdam-Berlin region. The center focuses its work on policy-relevant economic research, which includes labor markets, inequality, human behavior, economic growth, and sustainability. CEPA offers an ambitious economics curriculum to bachelor, master and PhD students (in cooperation with the Berlin School of Economics). In addition to academic training, students of the University of Potsdam can acquire skills in economic policy analysis through CEPA’s Internship Program at partner institutions.

The Socio-Economic Panel (SOEP) is the largest and longest-running multidisciplinary household survey in Germany. The SOEP is part of the German research infrastructure at DIW Berlin and is funded by the Federal Ministry of Education and Research (BMBF) and the federal German states under the umbrella of the Leibniz Association (WGL).

Since 1984, every year several thousand people have been interviewed for the SOEP by the polling agency Kantar Public. Currently, this includes approximately 30,000 people in 15,000 households. The SOEP data provide information about personality traits, education, health, income, employment, and life satisfaction. Since the same people are interviewed every year, one can analyze not only long-term social trends but also the group-specific development of life courses.