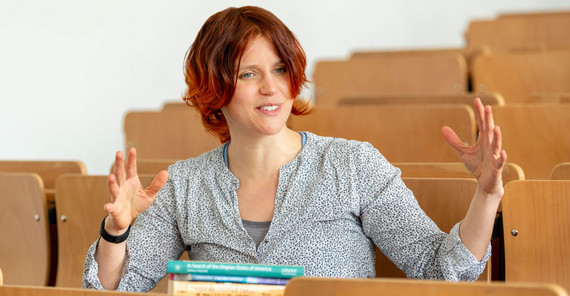 In the realm of utopia, everything is supposedly better: There is no injustice or oppression but fair work, sufficient food, education, and life satisfaction for all. US American literature of the 18th and 19th century describes utopian communities based on real-life models. American studies expert Verena Adamik has analyzed five select novels and bridges the gap between fiction and reality.

When Verena Adamik talks about the topic of her doctoral thesis, it usually piques her interlocutor’s curiosity. “It is a topic on which virtually everyone has some opinion,” she says. “People then talk about how they envision it all and why it wouldn’t work out in the end anyway,” Adamik says, laughing. In her dissertation project, she examined what an ideal community might look like and what makes it fail or succeed, and the role played by the US American self-image as the “land of opportunity”. Adamik examined these research questions using five novels from US history. She called her work, which she also published as an English non-fiction book in 2020, “In Search of the Utopian States of America”.

Communities existed long before the hippies

The hippie movement of the 1960s provides probably the most prominent example of a community that rebelled against the then common perceptions of life and morality – quintessentially US American, and at the same time dismissive of firmly held American values such as prosperity, capitalism, and consumerism. “Long before the hippies, however, there were people in the US who had very radical reform ideas and also tried to implement them,” Adamik explains, who through literary research delved deeper into the world of the Amish, Mennonites, Quakers, Owenites, and Shakers. Especially in the middle of the 19th century, numerous communes with alternative views on life flourished in the US. Ending the oppression of the working class, abolishing slavery, living in harmony with nature, being a farmer and at the same time an intellectual, being self-sufficient or sharing everything communally, simply living in a better society – these were often the goals of such communities.

Author Marie Howland writes about this in her 1874 novel “Papa’s Own Girl”. “The novel is almost forgotten today, but at the time it persuaded over a thousand people to join a community,” Adamik says. Howland herself came from a very poor family, started working in a factory at an early age, benefited from the first workers’ education programs, and ultimately moved in New York’s intellectual circles as a writer, feminist, and reformer. She joined the Fourierists – a community that dates back to the French philosopher and early socialist thinker Charles Fourier. Its members wanted to live and work together in a kind of agricultural production and housing cooperative. Free love was an important concept of this community.

Adamik summarizes the content of the novel in one sentence, “Woman must get divorced, meets rich European count, founds community, happy ending.” Howland’s own life was apparently not quite as simple. She co-founded a community in Mexico, which quickly failed because it lacked an economic foundation. For Americanist Adamik, Howland is not only a fascinating personality but also a typical representative of her time – including some highly problematic ideas and convictions. Neither the liberation of enslaved people, for example, was particularly important to her nor the equal treatment of Black people. “The novel also has passages that really hurt,” Adamik says. For example its discussions of whether a civil war had really been necessary to abolish slavery. “But that also shows what was typical of those communities: They tried to solve one or two problems but didn’t want to deal with others.”

In addition to “Papa’s Own Girl”, Adamik examined and analyzed four other books. Of course, the researcher’s work is not finished after reading the books and taking a few notes on them. On the contrary: After that, her work is just getting started. The Americanist searches for secondary literature on the historical background and questions raised by the novels, reads specialist literature on the texts, the authors, and the era. Then she goes through the books a second time. And a third time. And many more times. “Every book I write about I have touched at least ten times,” she says. She has invested about half a year’s work into each book to really get a complete picture of it.

At the end of this process, known among experts as “close reading”, the book contains numerous notes and underlines, with sticky notes in different colors on every third page. “Orange is for landscape descriptions, green is for everything on the utopian community, pink is for love, and yellow is for everything else that matters,” Adamik says, explaining the color choices in her working copy of “The Emigrants” by author Gilbert Imlay. The novel was published in 1793 and was once considered the first US American novel ever written. “Here, everything comes together,” Adamik describes the book, “the perfect hero, the perfect heroine, the perfect landscape, and the perfect country.” Against this backdrop, the protagonists establish a community where everything is perfect, too, and everyone is happy. However, the author drew the picture of this ideal community not entirely altruistically. “He wanted to sell land with it,” Adamik explains, “and nourished the cliché of the land of opportunity with his story.”

The analysis of the novels shows what is reality and what merely illusion regarding this promise, which also reveals much about what the people of the time considered advantages and disadvantages of the United States. Literary studies here mix with historical and cultural studies. Both the books and history show, “the better and more elaborately the structures were planned, the more successful the communities were.” A solid economic basis, craftsmanship, fair distribution of goods, and common, binding values were – and are – good guarantors of successful coexistence. “Religious communities are often more successful in this respect because they share a similar view of the world,” Adamik says.

A way out of oppression

Through the motif of the community the examined books negotiate over and over again whether people can improve the US and the world. After all, it is also every community’s aspiration to lead a better life immediately and in the here and now. “The idea of utopia was particularly attractive to African Americans,” Adamik explains. After the Civil War, they had a short window of opportunity to improve their living conditions. Black people had the right to vote, for example, and were able to hold important political offices. “When that window of opportunity closed again,” she says, “an incredibly terrible time began for Black people in the United States.” Lynching was commonplace, Black people received the lowest wages, were discriminated wherever possible. “During that time, many Black intellectuals wondered where the way out might be.” As a result, utopian communities also boomed among the Black population. “To this day, this idea still lives in urban gardening projects, for example, which are predominantly run by African Americans in the US to provide the neighborhood with fresh vegetables,” she says.

While Adamik is breaking new ground in Germany with her topic, there is already a completely distinct discipline, “Communal Studies”, in the US, which researches the history and present of communities. The association “Society of Utopian Studies” brings together researchers of various disciplines who research the utopian aspect. Adamik, who has launched her own podcast, “Talking American Studies”, where she presents current research from American Studies, also engages in a close exchange with colleagues of this network for her follow-up project. This time, it’s about the 20th century and novels dealing with grand conspiracies masterminded to improve the world. “The topic is shadow states and other forms of large-scale organized resistance to racism, which has not yet been dealt with in literary studies,” Adamik explains, who – “if everything works out” – will make this her habilitation project.

Dr. Verena Adamik studied English Literature, American Studies, and Psychology at the Julius-Maximilians University of Würzburg. Since 2013, she has been a research and teaching assistant at the University of Potsdam, where she earned her doctoral degree in 2018.
Mail: verena.adamikuuni-potsdampde

Based on five historical novels of US American literature of the 18th and 19th century, “In Search of the Utopian States of America” analyzes the connection between the self-image of the US as a “land of opportunity” and the founding of utopian communities. The English non-fiction book was published by Palgrave Macmillan in December 2020.
ISBN: 978-3-030-60279-6