The Time of Open Ears – New in Potsdam: As Professor of Music Education and Music Didactics, Isolde Malmberg is committed to strengthening her subject 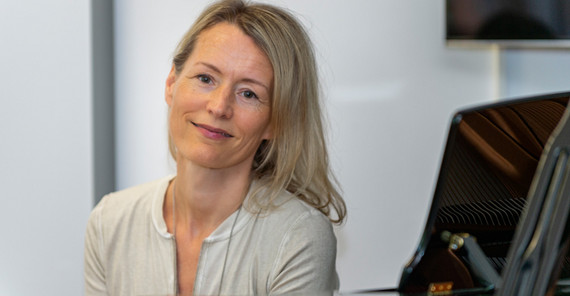 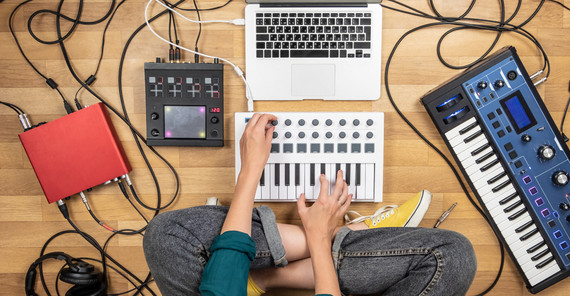 Born in Linz, she moved to Vienna for her studies. There was no getting around music here: the Opera, the concert halls, the clubs and salons. Music from every alley, every little church. Both classical music like Mozart or Haydn, and contemporary music at the festival “Wien Modern”. How could one ever leave this city? Especially as someone who teaches music and is a member of the renowned Arnold Schoenberg Choir. But it may well be that wherever you go in life, the sounds you have heard, the songs you have sung, and the pieces you have played stay with you. A sounding memory, always present.

Isolde Malmberg sits in her Golm office and feels that this is just the right place to be. Here she can do what is so dear to her heart: Train future music teachers. In Vienna, she had worked at a school for eight years before returning to university to combine her skills in music pedagogy with her ample experience in order to develop new teaching methods. She wrote her doctoral thesis on the project method in music teaching and described the huge potential of student-led artistic and creative learning processes for the musical and aesthetic education of children and young people. Especially for the youngest children it is important to expand their period of “open ears” as much as possible. Malmberg uses the expression to describe the early years when musical preferences have not yet developed and children absorb every rhythm and melody naturally. This period lasts until they are about ten. Later, they develop musical preferences which may restrict their view – much like blinders. So how can this be prevented?

“Making music is the best way to keep one’s ears open – whether it is playing an instrument or using one’s voice,” Malmberg says. Following her time in Vienna, she trained future elementary school and special needs teachers at the Rostock University of Music for some time. Studies in string and wind classes revealed that children who practice music remain more open to musical genres and styles. Malmberg knows that it is important to open all doors to the acoustic world so that, later on, children can make conscious decisions and enjoy the whole world of music. As a trained mezzo-soprano, Malmberg is particularly happy to find that there is more singing in German schools these days. Especially in West Germany, singing had been frowned upon since the 1960s. “Your voice is always with you. Everyone can use their voice – and (learn to) sing.”

Malmberg doesn't believe that there is such a thing as an untalented child. Often enough in project lessons she saw children excel when their interests were touched and new paths to their emotional world opened. As an educationalist, Malmberg knows that this is not coincidence, but a matter of methodology. But there is a huge gap here. Music didactics is “more of a patchwork” and the subject as such “chronically under-researched,” she says. As one might expect, she is going to change that.

Turning points of criticism into visions

Even though the pandemic weighed heavily on her first year in Potsdam, she has got a lot off the ground in terms of teacher training: for example, a future workshop on music instruction in the planned university school. “Once we had agreed that everything needs to be changed, the students were asked to criticize their own subject,” Malmberg reports. “In the next step, they were encouraged to develop visions based on their points of criticism. The final step  – and this is important in a future workshop – was the realization of these visions,” Malmberg explains. “In our case, this meant presenting the innovations developed by the concept group for the university school.” For the students this was an important experience. Many of them see the weak points in music teaching – which often does not correspond to the interests of children and young people –  very clearly. As classrooms are becoming more heterogeneous, diagnostic tools are needed to establish what the pupils already know and are capable of. Only then can the teachers build on that using the right tools, Malmberg finds.
Meanwhile, the first students have developed their own didactic tools. They will test them during their practical semester and write their master's theses about them. “Developing and testing, evaluating and refining – it’s a spiral process,” Malmberg explains, tracing a spiral with her hands.

For instance, digital instruments can be used for playing, or virtual and augmented reality for music reception. “There is no use in tiptoeing around it,” says Malmberg, who is a classically trained pianist and singer. “Rather, we have to see not only what new technologies can do, but also what our artistic aspirations are.” That's why the University's music department is now cooperating more closely with Kammerakademie Potsdam, which has been able to gain important experience with virtual concerts during the pandemic. Besides, Malmberg is hoping for a lot of inspiration in the less-familiar genre of new music from this orchestra.

Recently, students gained their first practical experience with digital sound experiments during a project week on water and sustainability hosted by the University of Potsdam in cooperation with Leibniz Gymnasium Potsdam, a secondary school. The interdisciplinary program for eighth-graders was organized jointly by the Center for Teacher Training and Educational Research and future teachers of chemistry and biology.

Above all, it was this interdisciplinary exchange with the didactics of other subjects which prompted Malmberg to transfer from the Rostock University of Music to the University of Potsdam a year ago. Here, she can work with many like-minded people to bolster the teaching profession, both within the University and in cooperation with other teacher training colleges. A round table has been established with Berlin's University of the Arts. “We don't see each other as competitors, we support each other,” says Malmberg, who is active in the international arena as well. Earlier this year, she was elected President of the European Association for Music in Schools (EAS). Even in Vienna she coordinated the establishment of the “music education network”, a European network of communication and knowledge management in music education. “It is so important to support each other and learn from each other, as music education has come under pressure, suffered cutbacks and is being pushed back across Europe,” Malmberg warns. Except for the Baltic countries, that is, which have been known for assigning high – even political – importance to music and singing since well before their “Singing Revolution”.

Every child should have the opportunity to play an instrument

In her education policy demands, Malmberg does not mince her words: The teaching profession needs to be upgraded in general. “Teachers teach too many hours and spend too much time on other tasks,” she criticizes. As far as music is concerned, lessons must be firmly integrated into the curriculum and taught as one double lesson per week, not merely a period of 45 minutes. Structurally, schools should be connected with music schools so that every child has the opportunity to play an instrument. All schools, especially elementary schools, must be equipped with specialist music teachers because “for younger children, music should be both an integrative part of a range of subjects and an independent subject,” Malmberg underlines. And, of course, every school needs a choir. Not as a means to an end, for transfer effects, to promote social interaction, but to gain artistic experience. “Art is a value in itself. It is about experiencing your own aesthetic creation of the world.” Malmberg says this with passionate conviction and a tone in her voice as if there was broad agreement on this point. Of course, she knows that it is not as easy as it sounds, but: “Impossibilities are the most beautiful possibilities.” She learned this from Nikolaus Harnoncourt, the exceptional conductor. She had the good fortune of working with him during her time as a member of the Arnold Schoenberg Choir, his preferred choir. The Viennese memories echo indelibly in her. She brought them with her to Potsdam. A sounding memory, always present.

A seminar offered teacher trainees the opportunity to rethink the music lessons of the future with Isolde Malmberg, Professor of Music Education and Music Didactics. It took the form of a future workshop and dealt with the question of what music instruction could and should look like at the future university school. Which didactic concepts should definitely be accommodated? What rooms need to be built? How can one cooperate with outside partners? Based on these and similar questions, the students developed didactic and pedagogical approaches to music lessons at the future university school in Potsdam. They presented their ideas to the university school concept team, together with a strong position paper.