“The Sound of a Generation” – Professor for Romance Linguistics Annette Gerstenberg analyzes language in old age. 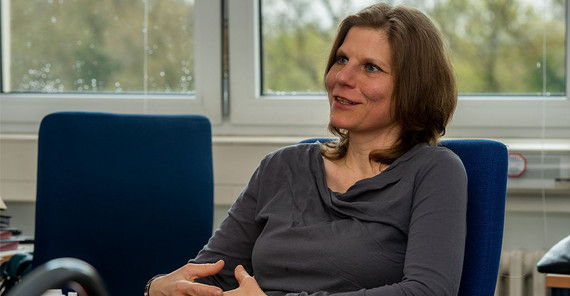 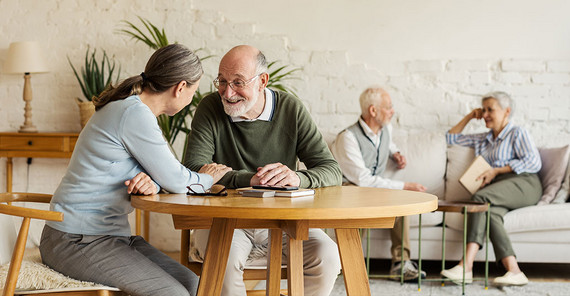 Annette Gerstenberg has an unusual hobby. She is interested in language. As a professor of Romance linguistics for French and Italian at the University of Potsdam this is, of course, completely normal. However, her longstanding passion is for a rather neglected linguistic field - the language of old age. After more than 15 years of research, her scientific conclusion is surprising: the language of old age doesn’t exist. Nevertheless, how language is used in old age is all the more exciting and shows just how people learn throughout their entire lives, demonstrating that the value of experience should not be underestimated.

From our earliest babbling to the most complex grammar, how we learn to speak has been widely researched for years. Researchers, parents, and the general public are fascinated by the human brain’s outstanding performance, beginning all the way back in early childhood. But what happens to our language as we get older? What do we continue to learn, and what do we stop learning? What do we lose, what do we gain? How do we offset deficits and compensate with the language skills we already have? “Very little research has been done so far on how language changes in old age and what remains the same,” explains Gerstenberg. Stereotypes and blanket statements, she says, dominated this field in the 20th century. “Language development over a human lifetime was described as an inverted U – with the peak in the middle of one’s life followed by a steady decline.” Sometimes researchers wondered whether older people should even be included in linguistic studies at all, or whether they would be better in medical studies.

There is not just one language of old age

Gerstenberg has found her answer. She has been researching language in old age for over 15 years. So far, the results of her work have proven her right. “People continue to communicate effectively in old age,” she says. One of the key findings of her research is that there is not just one typical language of old age. Grammatical strategies, prosodic patterns, and lexical repertoires are simply too different. Nevertheless, there are common features among speakers of the same generation. “Apart from physical and cognitive preconditions, age is the product of performance, socialization, conscious decisions, dispositions, and self-descriptions,” Gerstenberg explains. “On the whole, aging is a pretty actively managed process. That also applies to language.” To do justice to this complexity, the linguist has founded an interdisciplinary network together with a Belgian colleague: Corpora for Language and Aging Research. "Pragma-, psycho-, and sociolinguistics, computational linguistic modeling, practice-oriented research. Thinking outside the box is almost inevitable here.”

The Romance linguist began her own research after receiving her doctorate. For her habilitation project, she was looking for a field that had not yet been “sufficiently explored”– such as language in old age. She found a suitable location for her investigations in Orléans, France. A working group had been collecting linguistic data there since the 1960s, and Gerstenberg was able to draw on this data for comparisons. In 2005, she began to recruit volunteers for interviews. “I stood in the pedestrian area and asked people if they were willing to tell me about their lives. I learned the hard way that old people are actually very busy.” She also found people willing to participate in her project through colleagues, and in homes for senior citizens. In total, she conducted a first round of 56 interviews, with most interviewees between 70 and 90 years old and some younger interviewees serving as a control group. The interviews were inspired by methods of oral history, which Gerstenberg had already used during her master’s studies. “The fact that Orléans was under German occupation in the 1940s is of great interest for the interviews.” The form of strongly monologic narration was great for the study. “In order to obtain comparable language material, I always addressed and asked about the same series of topics,” she explains. “I had to get my interviewees to speak – and steer against a dialogue.” With younger people in particular, she says, this was no easy task, while older people often readily reproduced larger, well-rehearsed narratives about their lives. The speech samples were used to collect spontaneous and coherent data that could be analyzed linguistically. “I wanted to collect specific language data that provided robust information about language use – such as negation, sentence length, pauses, and lexis, relationship to standard language, and much more.”

Subsequent analysis revealed to Gerstenberg that there is “something like a sound of a generation”. This comes from the common educational horizon, which affects, for example, the relationship to language acquisition and its lifelong use as well as shared experiences. “My respondents were really concerned with school-taught written language, standard French, which was evident in their choice of words, sentence planning, and many other aspects.” Gender and other roles reflected in language use can also be attributed to specific generations.

Making better use of pauses when speaking

Nevertheless, the linguist was able to identify some peculiarities that characterize language in old age, distinguishing it from the language of younger people. “As overall strength decreases over the course of one’s life, this also affects the strength available for speaking, which makes a difference when it comes to things like the length and type of pause or prosody,” she explains. The interviews showed that the number of so-called filled pauses, when people say ‘er’ or ‘ah’ while searching for the appropriate word to use, decreases as people age, since they require additional strength from the speaker. “As a result, they can maintain the pace of speaking and purposefully use the few pauses they still make in storytelling. This shows the experience in speaking or storytelling that older people have, and what they use to compensate for deficits such as decreasing strength or declining memory.” Sentence planning and the structure of longer narrative segments, for example, showed that older people relied on tried patterns and rehearsed speech acts. “I am particularly interested in the relationship between consistency and the dynamics of language in old age: what remains stable? What changes?” Gerstenberg explains. “How do narratives find their consistency, how are they used repeatedly? How do narrative practices develop over the course of one’s life? At what points can we identify this linguistically?”

Other differences have social roots. Many people actively change their language as life progresses. “When you’re young, you want to sound cool,” she says. Later on, as most people are working towards a career, they try to become respectable and adapt their speech accordingly. Here, the language of aging is a consciously chosen tool. The use of linguistic resources that communicatively “establish” age works in a similar way. In conversation with younger people, for example, older people often, according to the linguist, choose phrases which “make” them old (like “despite my age”).

In 2011, Annette Gerstenberg published her postdoctoral thesis on “Generation und Sprachprofile im höheren Lebensalter” (Generation and Language Profiles in Later Life). But this was by no means the end of her work. Only one year later, the Romance linguist returned to Orléans to carry on the conversations. She was able to find 34 of the interviewees and interview them again. She repeated the same in 2015 and was able to conduct another 23 interviews. In addition to the re-interviewed people, new interviewees were included to maintain a balanced composition. A fourth round she had planned for 2020 was thwarted by the Corona pandemic. Nevertheless, the result is not only a cross-sectional but also a longitudinal study, which can be used to conduct further analyses of how language changes with age. For example, among the interviewees was a woman who, after some time, showed signs of dementia. Gerstenberg began to interview her annually to study how the disease affected her speech. “It’s quite amazing that certain linguistic structures turn out to be an extremely stable resource that even resists dementia.” Especially those (self-) narrations that are more firmly established remained available. “While simple small talk became increasingly difficult for her, there was a real tipping effect when she switched to the retold story of her life,” the linguist explains. “Certain memories as well as rehearsed speech acts that seemed almost melodious, as if they were being sung, proved largely resistant.”

A corpus for many researchers

Gerstenberg is still working with the language data from her Orléans interviews. She continues to examine the material in more detail, all the while discovering new facets. “We use various computer-linguistic evaluation methods such as speech recognition, lexical statistics, and machine readouts of vocabulary,” she says. “But we still cannot go completely without manual work. Speech pauses can already be measured quite well by a computer, but to find phonation, i.e., voicing, we still have to check by listening again and annotating it.” Over 120 recordings are fully transcribed and available along with the audio recordings, mainly in a database where text and audio can be searched together. From this database, sub-corpora identifying linguistic features have been compiled for specific purposes: prosody and lexis, aspects of grammar like the very interesting forms of negation in French, or the narratives interspersed throughout the interviews. Gerstenberg has opened up the database to the research community, while still keeping track of all those who make us of the corpora. “LangAge” is intended to provide material for researchers from various linguistic sub-disciplines and related fields dealing with the language in old age. At the moment, Gerstenberg is particularly interested in the evaluation of the longitudinal study. How does the narration itself change, and how are the narratives integrated into the interview conversation? Moreover, there’s another way that research can learn from age: “Are there speech acts tied to specific life stages, and how can they be identified?” The question she is asking is not so much what the language of old age looks like, but how language is used in different age groups.

All this has not yet exhausted the possibilities of the “LangAge” corpus. Since the interviews were prepared and conducted in the tradition of oral history, Gerstenberg has also started to evaluate them from the perspective of historiography. Some interview partners used former propaganda terms such as “going to work in Germany” for forced labor (“service du travail obligatoire”) quite unremarkably. People who had experienced forced labor themselves, on the other hand, avoided such terms and used typical self-descriptions. This was revealed by a comparison with interviews conducted by the Forced Labor Archive of Freie Universität Berlin. To enable further analyses of this kind, the linguist is cooperating with researchers from Freie Universität Berlin and using the digitized archive contents. “Working on overarching questions creates true added value.”

The Corpora for Language and Aging Research (CLARe) is a network bringing together researchers from around the world analyzing language in old age. CLARe was established in 2014 as an arena for empirical approaches and innovative methods to collect language data from older adults. In 2022, the fifth network conference will be held at the University of Alaska, Anchorage. Previous conferences took place in Belgium, Berlin, and Helsinki.

The LangAge corpus is a longitudinal corpus (2005 – 2015). It consists of narrative biographic interviews with elderly French speaking people (most of them over 70 years of age) from the city of Orléans.

Prof. Dr. Annette Gerstenberg studied medieval and modern history, Romance studies/Italian as well as geography in Bonn, Perugia, and Jena. Since 2017, she has been Professor for Romance Linguistics (French/Italian) at the University of Potsdam.
Mail: annette.gerstenberguuni-potsdampde