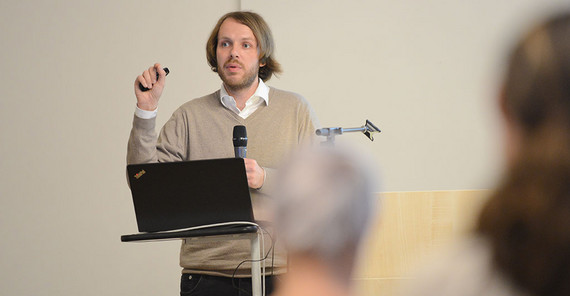 When COVID-19 infections, and with them the severe COVID cases, skyrocketed in the spring of 2020, medical laypersons, i.e. most people, learned a term that originated in the military and doesn’t sound half as ominous in French as it does in German: triage. People were hesitant to imagine what it would mean to sort patients according to the severity of their illness and their chances of survival in order to be able to select those who would receive intensive treatment in case of limited capacities. Suddenly, questions of medical ethics were on everyone’s lips.

During his winter vacation in early 2020, Robert Ranisch still thought that COVID-19 would be over in a month or two. But after returning to Tübingen, where he worked theoretically at the university and practically at the hospital as an expert on medical ethics, he soon realized the extent of the catastrophe. “In our professional association, we discussed medical ethical challenges of the pandemic early on, including triage,” he reports. The dramatic images from Bergamo did the rest. “We began to prepare: What would responsible triage look like? How could future vaccines be fairly distributed? What privileges should vaccinated people get?” There was little praise for the answers. “Nobody wanted to hear anything like that,” Ranisch says, who, like his colleagues, had to put up with accusations of pessimism. But they knew what they were talking about. Ranisch had already dealt with similar issues in connection with the Ebola epidemic in Central Africa. “The question was how to properly deploy the few local resources to save as many people as possible. In addition, medical staff had to be trained on the ethical conflicts of such decisions,” Ranisch reports.

Even though the feared overload of intensive care units did not happen in Germany, it was still important to be prepared. This experience brought him, together with his colleagues in medical ethics networks, to address foreseeable problems associated with the COVID-19 pandemic in time. When the second wave hit in the fall, they were already able to present a few results, such as ethics guidelines for vaccine distribution and digital contact tracing while respecting data privacy. However, months passed before these were being used. “That’s frustrating because several developments didn’t come as a complete surprise,” Ranisch says, who doesn’t deny his particular affinity for questions arising from digitization.

From philosophy to medical ethics

Ranisch had initially wanted to study computer science. Since his sister had already chosen this subject, Ranisch, who was born in Thuringia, went to Weimar to train in the arts. First, however, he completed a general studies program at the university in Jena and, in order to earn money, developed a new logo for the ethics institute there. “I found the things they were doing really exciting, and enrolled in the minor,” says Ranisch, who immediately caught the bug for the subject and ended up studying philosophy. After stints at the universities of Warwick and Oxford, he returned to Germany to work on ethical issues of new technologies, like genetics and digitization, while completing his doctorate. Two fields of knowledge with a similar mentality, as Ranisch says. “Whether genetic engineer or programmer – both enter into a code to change its information,” Ranisch says, who has been head of the research unit “Ethics of Genome Editing" at the Institute for Ethics and History of Medicine in Tübingen since 2017.

One of the key questions that has been on his mind ever since are the long-term consequences of so-called germline interventions – when humans intervene in the process of procreation and thus evolution to prevent hereditary diseases. “After all, the genetic changes are passed on to the children and grandchildren of the yet unborn child, and not only the desired but also potential adverse effects. This is an overall question for humankind that we need to discuss on a broad basis,” he urges. When the first genetically modified babies, the twins Lulu and Nana, were born in China in 2018, this was a great shock and opened Pandora’s box. Can it be closed again? “Without wanting to limit the freedom of research, we must always consider the consequences of our inventions,” Ranisch warns. In other areas, such as nuclear energy or the combustion engine, it was possible to backpedal. On the other hand, no one can or wants to stop scientific progress. In the ethical discussion of new technologies, he therefore advocates a change in the fundamental question, from “Are we allowed to do this at all?” to “How can we do this well?”, because this is where the responsibility of those acting is needed.

Teaching across disciplines and supporting the practical field

This spring, in the midst of the third lockdown, Ranisch was appointed Junior Professor of Medical Ethics of the University of Potsdam. He is thus the first newly appointed professor of the Faculty of Health Sciences, which is currently being established and is a joint project of the University of Potsdam, the Brandenburg Medical School Theodor Fontane and the Brandenburg University of Technology Cottbus-Senftenberg. In Potsdam, he will particularly focus on ethical aspects of digitized health care, “an area in which opportunities and risks are interconnected, where an unreflective euphoria about technology is just as out of the question as a fear-driven attack on new computer-based possibilities,” says the faculty's founding dean, Prof. Dr. med. Cornelius Frömmel. Because “digital medicine” will also have to be medicine devoted to people.

"We can already collect valuable health data via mobile phone or smartwatch, and that carries great potential,” Ranisch says. “However, permanent health tracking can change our self-image or our relationship to the healing professions,” he points out. In the future, he wants to explore such issues in research and teaching, but also in ethics consultation, to contribute to a responsible development of new care concepts and structures. Brandenburg could become a future-oriented model location for good and fair health care, says the medical ethicist, who would also like to offer courses of subjects other than health sciences to be able to discuss values with students of other disciplines.

Ranisch also wants to continue his work in ethics consultation in Brandenburg. As managing director of the Clinical Ethics Committee at the University Hospital of Tübingen, he had assisted in overcoming ethical challenges at the hospital. “The medical profession comes with great responsibility and outstanding dedication, with the duty to help, to heal, and to maintain confidentiality. All this means that physicians are often confronted with ethical conflicts,” Ranisch knows. In the case of patients who are incapable of giving consent, for example, there might be the question which treatment would be in their best interest. This is where clinical ethics consulation comes in. Together with the medical staff and relatives, the counselors try to give recommendations. “Such a service may also be expanded in the state of Brandenburg, at hospitals but especially at outpatient departments,” Ranisch suggests, who is advocating for establishing a corresponding network for Brandenburg.

Creating greater awareness for this topic and communicating medical ethics to the general public are particularly important to him. He and his colleague Julia Diekämper have just been awarded the Tübingen Early-Career Prize for Science Communication. Together with the Museum für Naturkunde – Leibniz Institute for Evolution and Biodiversity Science, they had addressed ethical questions arising from the increasing possibilities of germline interventions in the research project “ZukunftMensch”. They used the birth of the genetically modified twins Lulu and Nana as an opportunity to discuss with a broad public the potential consequences of intervening into the human genome. “We went to cinemas and pubs, asked people to write greeting cards to the two children and also to the responsible researcher,” Ranisch says. The newly appointed professor wants to pursue such effective public formats in Potsdam, for example on issues of “planetary health”, issues that are particularly pressing during the pandemic: Where does the COVID-19 virus come from? Meat consumption, urbanization, deforestation, climate change, and the pandemic – how are these things connected? “We researchers must reach out, take people seriously and explain complicated things in a generally understandable way,” says Ranisch and adds, “also when we communicate with the media and politicians.” Today, within just one legislative period, he says, things have to be decided that have an impact far into the future. “Parliaments probably need ombudspersons who always keep an eye on the long-term nature of today’s decisions,” he says. To convey the uncertainty of science is a difficult task, he adds. Why is there so much seemingly contradictory information coming from the field of research, as is the case right now during the pandemic? How can we handle permanent uncertainty? “We need to make people aware that there are always various hypotheses, that it takes a long time for something new to emerge, that there are failures and errors, but that science still deserves trust,” Ranisch says, deeply convinced that problems can only be solved if we all act jointly and assume responsibility. “Science needs values!”

Prof. Dr. Robert Ranisch studied philosophy in Warwick, Jena, and Oxford. He earned his doctorate in biomedical ethics in Düsseldorf and Tübingen. Since 2021, he has been Junior Professor of Medical Ethics (tenure track) with a focus on Digitization.
Mail: robert.ranischuuni-potsdampde

The Faculty of Health Sciences Brandenburg was established in 2018 as a joint faculty of the University of Potsdam, the Brandenburg Medical School Theodor Fontane and the Brandenburg University of Technology Cottbus-Senftenberg. It is the core of the Brandenburg Health Campus. The aim is to develop new types of medical, nursing, and medical-technical care services as well as innovative degree programs. In cooperation with other universities and research institutions, the faculty will contribute to improving medical care in the Brandenburg region.
https://www.fgw-brandenburg.de/