The forest of tomorrow – On former burnt areas, researchers are studying how forests can become more resilient 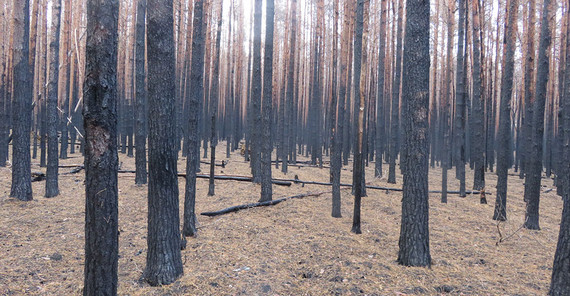 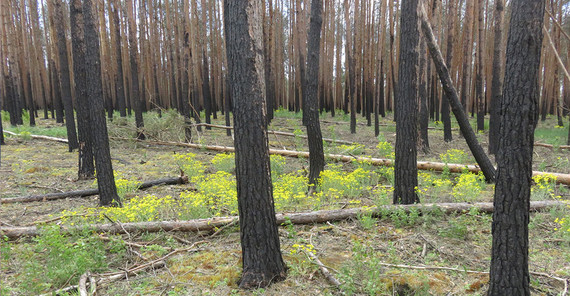 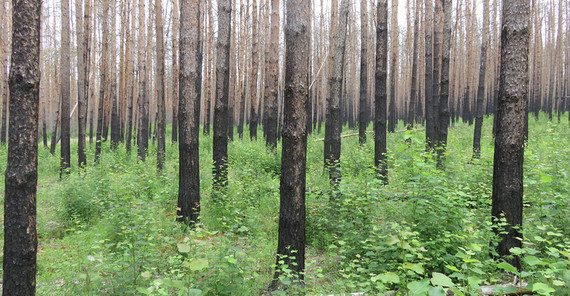 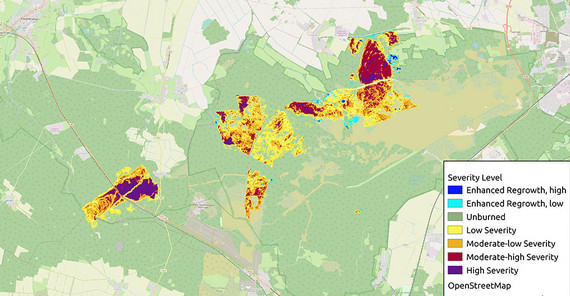 The forest in Germany is doing badly. Since 1984, the health of trees has been published in the annual forest condition report. In 2020, only 21% of trees had an intact crown– the worst condition since the survey began. Particularly the past years of drought, which led to devastating major fires in Brandenburg, have taken their toll on the forest. How the forest can become more resistant to drought, heat, and fire is being investigated by the joint research project PYROPHOB.

“Initially, there was nothing,” Dr. Thilo Heinken recalls his first visit to the forest fire area near Treuenbrietzen in November 2018. “Just dead pine trees and a black ground covered with ash.” A few months earlier, a typical Brandenburg Scots pine forest had been growing where the botanist now stood with the town’s forest ranger. In August, however, several hundred hectares of this forest had gone up in flames – after a summer of record-breaking temperatures and far too little rain. A year later, after great heat and drought, there was another large fire in a pine forest – this time near Jüterbog.

Both large fires were a disaster but created the unique opportunity to scientifically study such fire events. Today, the burnt areas are a kind of open-air laboratory where researchers from different disciplines and eight institutions investigate how vegetation, wildlife, microclimate, water balance, and soil are developing and what influence various silvicultural measures have on these developments.
“All components of the ecosystem ‘burnt pine forest’ are being investigated,” Heinken says, explaining the goal of the PYROPHOB collaborative research project, which was initiated by the Eberswalde University for Sustainable Development. Its aim is to generate knowledge about what the resilient, healthy forest of tomorrow might look like. “This is also an economic question,” emphasizes Heinken, who is involved in the “Soil Vegetation and Soil Moisture” subproject at PYROPHOB. After all, “it’s getting hotter, not really wetter, and extreme weather conditions like this will become more frequent,” which means that the danger of large fires will increase in the future.

Tracking down fire with satellites and sensors

The hydrology and climatology group at the University of Potsdam is also using the opportunity to analyze these forest fire areas. By means of remote sensing, the team is investigating the fire intensity, the condition of the tree populations, and the vegetation after the fires. The fires raged with different intensities in different locations, Dr. Arlena Brosinsky explains. Together with her team, she wants to analyze how and why individual areas are affected to such different degrees and how they are developing in the first few years after the fire.
Among other things, the researchers are using satellite data from the European Space Agency’s (ESA) “Copernicus” Earth observation program, which was recorded before and after the fire. From the reflectance in the near and short-wave infrared range, they are able to calculate how badly the areas were damaged by the fire and where the vegetation has remained intact. “This gives us a good spatial overview from the air and information that would be difficult to collect on the ground for such a vast area,” Brosinsky explains

On the map, which Brosinsky has created based on the satellite data, the fire intensity is represented by colors ranging from yellow to orange and red to purple. “The fire started here,” she explains, pointing to the yellow areas to the southwest of the fire site. “Then it spread northeast with the wind direction and turned into a treetop fire up here,” she explains the change in tones to dark purple. A yellow stripe runs through the most affected area on the map. “We can’t explain yet why the fire was apparently weaker here,” she says.

The researchers are trying to clarify the different shades, ripples, and lines on the map on site. Topography, soil type, vegetation, tree species, age of plants, and management – all these aspects can influence the fire intensity. “In addition to the fire intensity, we want to analyze the reasons for these patterns and understand recolonization.” The team also uses a hydrological measurement network to monitor precipitation and soil moisture as well as hydrological models to reconstruct soil water balance. The results will show which silvicultural measures are most beneficial to the emerging forest and are able to retain water and nutrients in the ecosystem.

While Brosinsky keeps track of her study areas primarily from a bird’s eye view and will also use the remote sensing data to analyze future plant growth, Maren Schüle examines the forest from the ground. The ecologist visited the forest areas near Treuenbrietzen for the first time two years after the major fire. She already saw a very different picture than in 2018. “The Canadian horseweed (Erigeron canadensis) had already spread enormously and covered the areas,” she recalls. “In other places, a sea of aspen was growing – some already over two meters high. It was all surprisingly green.” Together with Heinken, she studies how the understorey vegetation on the burnt areas is developing and compares it with unburnt control areas as well as with each other.

After the fire, the landowners, including the municipalities, the Brandenburg Wilderness Foundation and some private owners, dealt very differently with what the flames had left behind. On large areas, the dead wood was removed and the ground was plowed immediately after the fire. In some areas new trees were planted there. Others remained untouched and left to natural succession. Yet others were fenced off and tree seeds were spread. “We can observe what is happening on all these areas over a long period of time. You rarely get such a chance,” Schüle says happily.

There is a good reason why she is particularly interested in herbs, grasses, and mosses as well as the young trees. After all, the understorey vegetation has important functions for the areas’ further development. For example, it binds nutrients that are excessively present right after the fire but are then quickly washed out and disappear, covers the areas and thus prevents erosion. A humus layer can gradually form again as dead plant parts are decomposed by microorganisms. This prepares the way for other, more nutrient-demanding plants.

The first trees are poplars and birches

On a total of 150 circular sample areas, each 314 square meters, Schüle examines which plant species are present and how much of the area they cover. It takes her about half an hour to document all the plant species within the sample circle and estimate their number. She also records the biomass and its element and nutrient contents, measures shoot lengths and root collar diameters to get a comprehensive picture of the soil vegetation.

"The first plants here are often undemanding, have flying seeds that can travel long distances, or very long-lived seeds that survive for decades in the soil,” Heinken explains. They provide information about environmental conditions, whether it is dry or wet, rich or poor in nutrients. “Very different species grow on the burnt areas compared to the unburnt reference areas,” explains Schüle, who already found more than twice as many species on the burnt areas than on the unburnt areas in the first and second year after the fire. “There are many pioneer species among them, which always establish first on cleared areas, such as poplars and birches.”

Maren Schüle recorded more than 140 plant species in total. On average, the researcher found eleven species per sample circle on those forest areas that had been spared from the fire. More than twice as many, 26 on average, she found on the burnt areas. Some species occur now that depend on fire. “In the first year, the mycologists found over 40 species of fungi that only occur on burn places,” Heinken explains. “Among them are some that were recorded for the first time in Brandenburg.”

From pine forest to mixed forest

“The pine is a tree species that burns relatively quickly,” says Schüle. Pine monocultures are widespread, especially in Brandenburg because they grow quickly, are competitive on the nutrient-poor and sandy soils and have low water requirements. But for a more resilient forest, a good mix of deciduous and coniferous trees is needed. “We are not yet certain about which tree species will cope best with the new climate conditions,” Heinken knows. “Probably a mix of many different species is most advantageous, but a lot of testing and trying will be necessary.”

Over the next four years, the researchers will continue to document in detail which species are colonizing the burnt areas, how long it takes for trees to grow back to size, whether it makes sense to clear the areas of dead wood or whether it is better for new growth to leave the burnt tree remnants standing and lying. Ultimately, the question is: How can we create a resilient forest that can withstand fires and better recover from them? “We want to capture the overall picture, bring together the multitude of data, and ultimately provide a meaningful handout for an economically and ecologically sound management of Brandenburg’s pine forests,” says Heinken. He is convinced that, “The Scots pine will always have its place in Brandenburg – at extreme locations, but also as a pioneer tree species.”

PD Dr. Thilo Heinken studied biology in Göttingen. Since 2002, he has been researching at the Institute of Biochemistry and Biology of the University of Potsdam. The vegetation ecologist is an expert for pine forests.
Mail: thilo.heinkenuuni-potsdampde

Maren Schüle studied ecology, evolution, and nature conservation at the University of Potsdam. Since 2020, she has been a PhD student in the research project PYROPHOB.
Mail: maren.schueleuuni-potsdampde

Dr. Arlena Brosinsky studied landscape ecology in Münster. Since 2016, she has been research assistant at the Chair of Hydrology and climatology of the University of Potsdam and is the expert for remote sensing in the PYROPHOB project.
Mail: arlena.brosinskyuuni-potsdampde