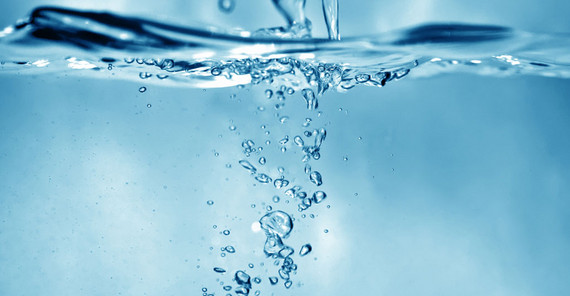 Photo : AdobeStock/magann
Two Potsdam researchers are involved in the new international Center for Molecular Water Science, which has now published its research program.
More than 45 institutions from Europe and across the globe - among them the University of Potsdam - have joined in an initiative for a new research centre at DESY, unveiling the many secrets of a very common substance: water. Today, after three years of intense discussion and planning, the initiative has published a White Paper which describes the aims and tasks of the new Centre for Molecular Water Science (CMWS).

Water is the key substance for life on our planet and plays a central role in numerous environmental and technological processes in our daily life. At the same time, it is one of the most fascinating chemical compounds showing many anomalies: It expands when being cooled, is virtually incompressible, has an unusually high heat storage capacity, and under certain circumstances it freezes when being heated.

Many of its surprising properties are essential for life as we know it. The comparatively simple molecule continues to surprise science despite centuries of research. Many of its peculiarities are still far from being understood.

In order to shed light on water’s mysteries, more than 300 researchers from over 20 countries came together to discuss the research agenda of the CMWS in several workshops at DESY during the last years. CMWS is a consortium of European and international partners where more than 45 groups have expressed their continued interest via Letters of Intent (LoI). Prof. Henrike Müller-Werkmeister from the Institute of Chemistry and Prof. Max Wilke from the Institute of Geosciences are spokespersons of two thematic pillars within the Centre. The scientific concept and the mission of the CMWS have been aggregated in the CMWS White Paper that has now been published. Both University of Potsdam representatives played a key role in the formulation of the White Paper.

“The publication of the White Paper marks a milestone in the short 3-year history of CMWS” says Gerhard Grübel, leading scientist at DESY and one of the coordinators of CMWS. “It describes the scope of the Centre, a collaborative, cross-disciplinary research initiative that will interconnect a highly dedicated laboratory infrastructure, the most advanced (experimental) techniques, leading theory/simulation tools, and forefront photon facilities to answer the most important questions in molecular water science.” The key scientific challenges, preliminary work, objectives, methodologies, and infrastructural needs have been identified during the past three years by a group of more than 140 scientists from more than 15 countries. The results are compiled and summarised in this document.

“In the Centre for Molecular Water Science, leading European scientists join forces with the ambitious goal of achieving a detailed molecular understanding of water and the dynamic processes at water interfaces, which is of highest relevance for biology, earth and the environment as well as for the many future technologies. The high-resolution analytics available at the modern research infrastructures at DESY, in particular at the highly brilliant synchrotron radiation sources PETRA III and, in the future, PETRA IV, are an essential core building block of this interdisciplinary research consortium,” says DESY Director Helmut Dosch.

The science of the CMWS is organized in five strategic pillars ranging from fundamental properties of water, e.g., understand water’s anomalies from its molecular structure and dynamics, over water’s role in climate, geo-science as well as energy research and technology. One of the aims of the research is the understanding of real-time chemical dynamics and water’s role in biology, such as in macromolecular folding and viral and bacterial infection, typically taking place in aqueous environments.

A central part of the science activities of the CMWS are planned to be located in a new research centre on the DESY Campus in Hamburg Bahrenfeld under the leadership of DESY as host laboratory and coordinating part¬ner. It will provide space for research groups and a dedicated laboratory infrastructure. Pivotal to the concept is access to DESY’s state-of-the-art photon facilities (PETRA III and PETRA IV, FLASH) and to the European XFEL. CMWS will be comprised of infrastructure hubs on other sites providing com¬plementary or further specialised capabilities, such as NMR and laboratory-based spectroscopy techniques.

“With the publication of the White Paper the CMWS scientists plan to extend their joint research”, says Melanie Schnell, leading scientist at DESY and as well coordinator of the CMWS. Scientific colla¬borations have already been started within an Early Science Programme (ESP) co-funded by DESY and the CMWS partners, where Prof. Müller-Werkmeister und Prof. Wilke are also involved. For the future it is planned to form closer collaborations via Memoranda of Understanding (MoU), collabora¬tion contracts, the build-up of CMWS pre¬paration and characterisation laboratories at DESY, and the implemen¬tation of the first infrastructure hubs.