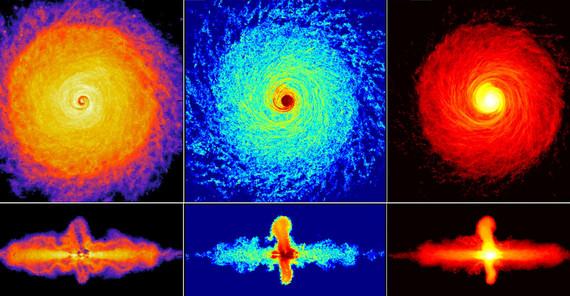 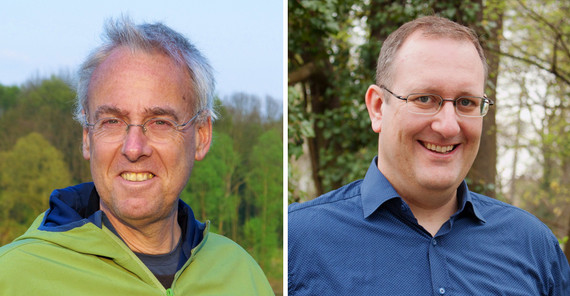 Photo : AIP/Pfrommer
Galaxy simulation
Photo : private (Wisotzki) / AIP (Pfrommer)
Lutz Wisotzki (left) and Christoph Pfrommer (right)
The European Research Council ERC has awarded two jointly appointed professors of the Leibniz Institute for Astrophysics Potsdam (AIP) and the University of Potsdam with one of the world’s most important honors for established researchers, the Advanced Grant – an extraordinary success. The funded projects by Prof. Lutz Wisotzki and Prof. Christoph Pfrommer both aim to improve our understanding of the formation of galaxies. Lutz Wisotzki focuses on observations using first-class instruments, while Christoph Pfrommer will combine plasma and cosmological galaxy simulations in a new and innovative manner.

“The fact that two first-class researchers from the filed of Astronomy working at the same institute were able to acquire this highly coveted grant in the same round of applications is an outstanding achievement,” congratulates Matthias Steinmetz, Chairman and Spokesperson of the AIP Board. “They both faced the strict selection procedure of the ERC and their success is proof of the scientific excellence at the AIP.” The projects will receive grants over a period of five years amounting to approximately EUR2.5 million each.

The newly acquired funding for the research project “Mind the Gap: from Plasma Kinetics to Cosmological Galaxy Formation” enables Christoph Pfrommer to bridge the gap between the processes on the smallest plasma scales and large-scale models of galaxy formation. The current state of research assumes that so-called “feedback processes” play a major role in the formation and evolution of galaxies and galaxy clusters. In young galaxies, for example, massive stars explode as supernovas, transfer energy and momentum to the surrounding interstellar medium, and accelerate elementary particles to very high energies, thus forming so-called cosmic rays.  Cosmic ray particles propagate along magnetic fields in galaxies and help drive the interstellar gas out of galaxies in galactic superwinds, suppressing subsequent star formation.

In galaxy clusters, supermassive black holes generate rapid outflows in the form of jets, which also accelerate cosmic rays. These stream into and heat the surrounding plasma of the galaxy cluster, thus preventing a cooling implosion, which would otherwise transform the galaxy cluster medium into stars. “A unique combination of plasma and cosmological simulations will now enable my research group to study the transportation of cosmic rays and heat in dwarf galaxies, galaxies like the Milky Way, and even galaxy clusters in a detailed manner,” Christoph Pfrommer states. “From the results, we can derive predictions, which can then be falsified or validated through observation.”

Christoph Pfrommer has been a researcher at the AIP since 2017, is the head of the “Cosmology and High-Energy Astrophysics” section, and a professor at the University of Potsdam. He studied physics at the University of Jena, at Harvard University in the US and subsequently completed his PhD at the Max Planck Institute for Astrophysics and the Ludwig Maximilian University in Munich. After a research stay at the Canadian Institute for Theoretical Astrophysics in Toronto, he returned to Germany and joined the Heidelberg Institute for Theoretical Studies. After his Habilitation at Heidelberg University, he was already awarded the ERC Consolidator Grant in 2016 worth EUR2 million. He used this grant to pioneer and establish the link between cosmic rays and galaxy formation in the past five years.

Lutz Wisotzki’s research project also focuses on galaxies. The project “Spectro-Mapping of the Circumgalactic Medium Across Cosmic Times” aims at developing a fundamentally new view of the structure and dynamics of gas flows in the surrounding area of galaxies, a domain known as the circumgalactic medium, which could be described as an ecosystem of galaxy formation. It has become evident in the last few years that the interaction of inflows from the intergalactic medium and outflows driven by supergalactic winds has a decisive influence on the evolution of galaxies. However, we still do not known much about the circumgalactic medium, mainly due to the low density of the gas, which makes it difficult to observe it.

The team of researchers tackle these difficulties by using the latest observation techniques, Lutz Wisotzki explains:  “We use two unique observational instruments, in particular, MUSE and HETDEX, both co-developed at the AIP, for which we have designed innovative methods for ‘spectral mapping’ of the circumgalactic medium.”  In the coming years, these methods are to be further refined and applied to comprehensive sets of new observational data from international large telescopes.

The European Research Council (ERC) is an institution established by the European Commission to promote fundamental research. There are two principles that distinguish this funding procedure: Excellence is the sole funding criterion and the selection procedure is independent and transparent. ERC Advanced Grants are awarded to well-established top researchers, who are scientifically independent and have a track record of recent high-level research successes and a profile which proves they are leaders in their respective field. Between 2008 and 2020, astrophysics researchers in Germany were able to acquire a total of 18 ERC Advanced Grants. The fact that two AIP scientists were so successful at the same time is remarkable.