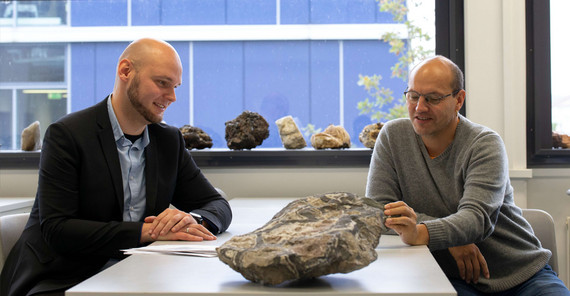 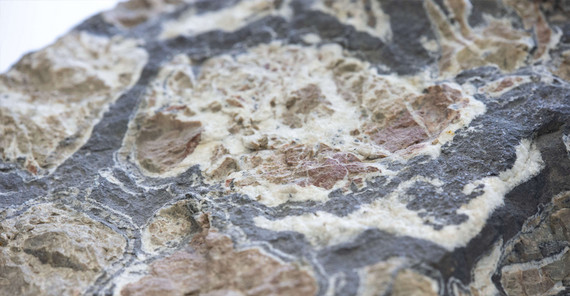 Photo : Sandra Scholz
Dr. Maximilian Korges and Prof. Dr. Max Wilke
Photo : Sandra Scholz
Residual ore
They come in all kinds of colors and shapes – black, white, green, blue or shiny silver, as nondescript as rock or formed into impressive crystals. Ores have aroused the interest of mankind for thousands of years. Hidden deep in the earth, the precious mixtures of rock and metal need to be found, mined, and processed by miners. Using a combination of geological field exploration, laboratory experiments, and computer modeling, researchers from geology, mineralogy, economic geology, petrology, and geochemistry are now digging for new insights into the formation of ore deposits as part of a priority program of the German Research Foundation (DFG).

A sample of mineralized rock lies on the table between the two geoscientists Maximilian Korges and Max Wilke. For non-experts, it is just a large stone with different colors, but for the two experts it is a witness to transformational processes in the Earth’s crust. “It is residual ore, a special form of vein mineralization, which was being mined in the Upper Harz mountains for almost 1,000 years,” Wilke explains. “The mine it came from was closed in 1992.” Maximilian Korges explains what a geologist can see in such a piece of rock. “A fluid came from below, probably an aqueous solution. It burst the rock and filled the cavities.” The former liquid crystallized and now surrounds the pieces of rock as a dark gray mass. Particularly those processes that occur at the interfaces of liquid and rock or magma and rock as well as in cavities are crucial for ore genesis because here the individual components react with each other and new ones as well as the typical ore crystals are formed.

Residual ore is exemplary for ore genesis resulting from the interaction of pressure, heat, rock, and fluids in the Earth’s crust. Much of what goes on in this process, however, is still unknown. “We know that metals are dissolved by magmatic or aqueous fluids, are then transported into the Earth’s upper layers and precipitate there as ore,” Wilke explains. It is only partially known at what pressures, temperatures, and chemical conditions this happens in various ores, and how long these processes take – hours, days, years, or millennia – is actually even largely unexplored.

Together with about 70 researchers from 18 scientific institutions across Germany, Korges and Wilke want to shed light on this subject. Together with researchers from the German Research Center for Geosciences (GFZ), the University of Münster and the University of Freiburg, they are coordinating a priority program of the German Research Foundation (DFG) that includes 26 individual projects. Using laboratory experiments and computer models, the researchers want to elucidate the formation of ores, their composition, and where the subsurface offers particularly good conditions for the formation of ore deposits. The findings will also support economic geology research in Germany.

Ore for the energy revolution

For a long time, little attention was paid to this field of research in Germany. “Ores and metals were bought in other countries, and the supply seemed secure,” says Wilke. In recent years, however, it has become clear that the supply of some metals is by no means as secure as it had seemed for a long time, while consumption is simultaneously increasing. Especially since many raw materials are indispensable to a transformation toward sustainable and climate-friendly economic systems. “For the past ten years or so, economic geology has become more attractive again, partly also because it has been invigorated by modern methods,” says Wilke, who would like to introduce this field of research particularly to young researchers. “It is hardly known what lies beneath two to three kilometer thick sedimentary layers, for example in the North German Basin,” says Korges, describing the research gaps that are to be closed in the future.

Basically all ores are of interest to the researchers of the priority program. However, there are some of particular interest. These include ores containing the element molybdenum. This transition metal is extremely heat-resistant and therefore of interest to the aerospace industry. It is part of numerous electronic components and thin-film solar cells. Rare earth metals, which include a total of 17 metals, are also promising research fields. “We are talking about so-called critical metals here,” Korges explains. “There are only a few suppliers for these elements. For example, 90% of the demand for rare earths is covered by the Asian market.” The supply of these raw materials to the industry is highly susceptible to disruption – while at the same time they are economically extremely significant. Without them, smartphones, wind turbines, and many other key technologies would not work.

In order to know where ores might form, you must know, for example, how well they can dissolve in thermal fluids. “However, knowledge about this aspect is very limited and has only been studied for certain ranges of pressure and temperature so far,” Wilke explains. Detailed knowledge about the properties of the metals in ores is necessary to feed the computer models that will ultimately provide information about possible deposits.

Ore crystals in a pressure cooker

The researchers obtain this important data, for example, with the help of experiments in pressure vessels. The ore is “cooked” in a liquid at high pressure and high temperature. The researchers use X-rays to measure how much ore dissolves in the liquid. “It’s like a sugar cube,” Wilke compares. “At some point, the solution is saturated and the sugar doesn’t dissolve any further.” It is the same with ore. How much of it can dissolve in an aqueous liquid depends on temperature, pressure, and the composition of the aqueous solution. Once the exact correlations are known, the researchers will be able to deduce which conditions are necessary to form solid ores from the solution again – just as it happens in natural ore systems in the earth.

Laboratory experiments, computer simulations, and also field-based geological explorations and excursions – for example to the German Ore Mountains, to Portugal, Greece, and Kyrgyzstan – will ultimately provide an overall picture of the ore properties and the locations in the subsurface suitable for potential deposits. The researchers may also find new approaches to the processing and recycling of ores. “When I know how the ore is formed, I know how to dissolve and mine it,” Wilke says. “And the best way to do this is to use more environmentally friendly methods.”

The results will also be interesting for the industry because they will enable a more targeted search for deposits of valuable ores. “Especially in deeper layers, exploration is very expensive. If we understand more about the systems, certain sites can be excluded from the outset while others become interesting. That saves money, of course,” Wilke emphasizes. And it could pave the way to new ore deposits that are as yet undiscovered.

Dr. Maximilian Korges studied applied geosciences at Martin Luther University Halle-Wittenberg. Since 2020, he has been a postdoctoral fellow in the working group Mineralogy of the Institute for Geosciences of the University of Potsdam.
Mail: korgesuuni-potsdampde

Prof. Max Wilke studied mineralogy at Leibniz University Hannover. Since 2015, he has been head of the working group Mineralogy at the Institute for Geosciences of the University of Potsdam.
Mail: wilkemuuni-potsdampde