A mineral pump for gold in the Earth’s crust 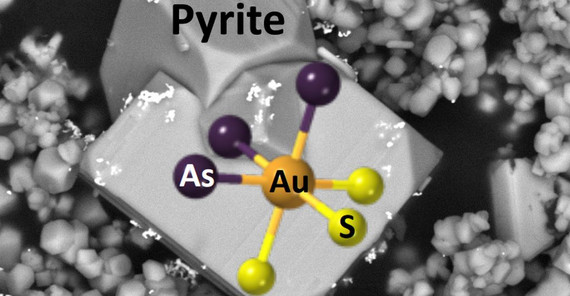 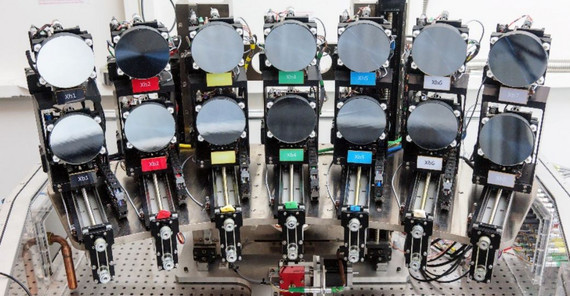 Photo : G. Pokrovski, M. Kokh, M. Blanchard, D. Testemale.
Representation of atomic clusters formed by gold, arsenic and sulfur in arsenian pyrite (shown in the background as imaged using Scanning Electron Microscopy; not to scale).
Photo : G. Pokrovski, M. Kokh, M. Blanchard, D. Testemale.
The existence of these clusters was revealed by this study using a high-resolution X-ray absorption spectroscopy device installed on the FAME-UHD beamline of the European Synchrotron Radiation Facility, ESRF.
An international team of scientists with participation of mineralogist Dr. Maria Kokh from the University of Potsdam was able to elucidate the mystery of ‘invisible’ gold enriched in sulfide minerals. Their results were recently published in the journal Geochemical Perspectives Letters. The research is part of the DFG priority program 2238 - Dynamics of Ore­Metals Enrichment - coordinated at the University of Potsdam.

To form an ore deposit, gold needs to be concentrated from a thousand up to a million times more than its average abundance in the Earth's crust (which is only about 1 mg per ton of rock). In nature, only very few minerals, namely the sulfides arsenian pyrite and arsenopyrite, are known to present such enrichment factors for gold. However, despite the enormous implications for ore deposits, the state of this ‘invisible' gold and the cause of its entrapment in these sulfides remain one of the greatest mysteries in the history of the study of ore deposits. An international interdisciplinary consortium of scientists has now shown the exact nature of this invisible gold incorporated by these minerals and revealed the fundamental mechanism that drives these ‘mineral pumps’ at the atomic-scale.

By combining high-resolution experiments – carried out at the European Synchrotron facility (ESRF) – and physical-chemical modeling, the team has discovered that gold enters these minerals with a formal oxidation state of +2. This is made possible by the occurrence of a redox reaction between the fluid and mineral that allows binding gold to arsenic, leading to the formation of the atomic cluster AuAsnS6-n in the mineral structure (Image). This universal gold-arsenic coupling mechanism explains how these iron sulfides can massively capture gold and release it later, controlling both concentration and distribution of gold in different types of hydrothermal deposits. This novel conceptual model opens perspectives for finding new sources of gold and other precious and critical metals hidden in iron sulfide minerals, and for improving the processing and recycling of metal ores for our ‘metal-hungry’ society.

Since 2020 researchers in the DFG priority program ‘Dynamics of Ore­Metals Enrichment’ (DOME) have been investigating how ore deposits are formed and develop over time. The program is coordinated by Prof. Dr. Max Wilke at the Institute of Geosciences, University of Potsdam, and combines numerous German Universities as well as the Helmholtz Centre Potsdam - German Research Centre for Geosciences.