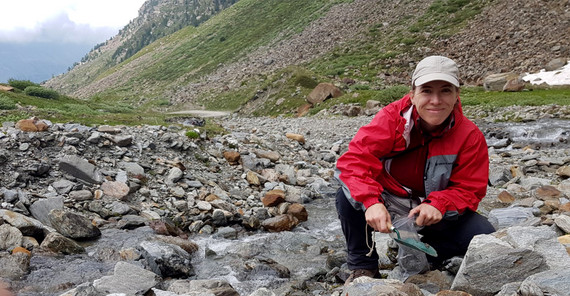 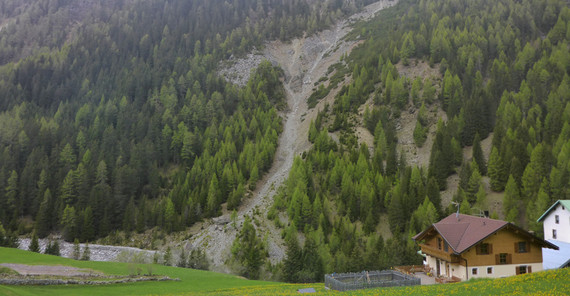 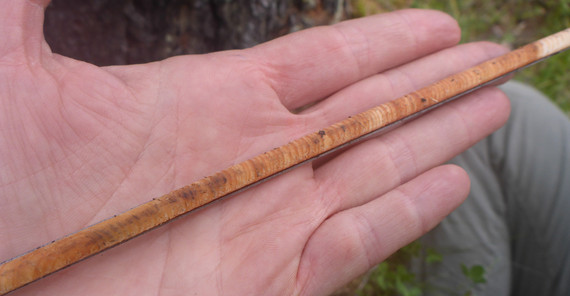 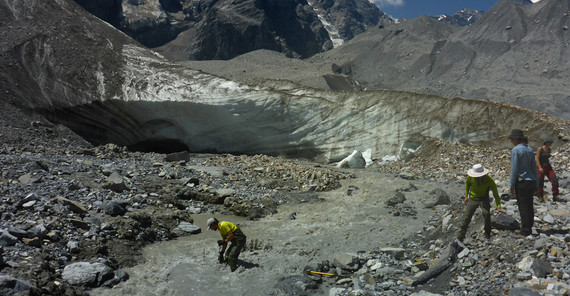 The full spectrum of the global effects of climate change cannot yet be predicted. One aspect that Sara Savi is investigating in her project funded by the German Research Foundation (DFG) is the relationship between climate change and the frequency of debris flows and rock falls in mountains, which pose a tremendous threat to humans, animals, and the economy. “I’m interested in the interaction between climate and geomorphological factors and their influence on surface processes at different temporal and spatial scales,” Savi says.

Her research project benefits from a German–Italian collaboration that integrates the expertise of colleagues from all participating institutions. For the field work, she is cooperating with the Free University of Bozen-Bolzano and the Eurac Research Center in Bozen; laboratory work is being carried out at the University of Potsdam.

Climate changes in mountain regions primarily lead to higher temperatures in summer changes in the frequency and intensity of rainstorms in winter. If temperatures are permanently above zero degrees Celsius, the permafrost layer melts and the ground thaws. “Slopes become unstable and that can trigger landslides,” Savi explains. “A prominent example is the Pizzo Cengalo rock fall in Switzerland in August 2017.” However, such massive movements, which are even noticed by the general public, are quite rare. The more common, small landslides, by contrast, are difficult to observe. Savi uses aerial photos to explore how the stability of slopes has changed over the past decades. She has already been able to document that the number of small rock falls has increased since the early 1990s due to rising temperatures and melting ground ice. Rock falls have especially increased at higher altitudes as the zero-degree isotherm, i.e. the temperature line that determines the melting of snow and ice, shifts toward higher altitudes. Here, the mountain morphology shows steeper slopes and vertical rock faces that are much more susceptible to breaking off.

Savi is currently investigating a small basin in the western part of the Passo dello Stelvio in South Tyrol. “The Alps offer many advantages as a field of research because large amounts of accessible data already exist,” says the geoscientist. She uses different approaches to explore the influence of climate change on sediment transport. To understand how erosion has developed in the basin, Savi collects samples of unconsolidated sediment - sand and rock fragments - on site. Due to the glacier retreat, the rivers transport more water and thus more sediment.

Radioisotopes and drilling cores in the lab

The subsequent steps take place in the laboratory for cosmogenic isotopes at the Institute for Geosciences of the University of Potsdam. For the geochemical analysis, Savi works together with Prof. Manfred Strecker and Prof. Bodo Bookhagen, and the student Pia Petzold supports the laboratory work. The cosmogenic nuclide 10Be, a radioactive isotope of beryllium, is extracted from the sediment samples and then analyzed with an accelerator mass spectrometer. The amount of 10Be can be used to determine how long the sediments were in the river. With this method, the researcher can look several thousand years back into the past.
To track down the frequency of debris flow activities in the mountains, Savi also uses dendrochronology, a method for determining the age of wood. Five-millimeter-thick cores are taken from tree trunks in the immediate vicinity of slope movements. The cores are used to determine changes in tree growth that indicate altered conditions triggered by landslides or rock falls. This enables the researcher to reconstruct the sequence of such events during the lifetime of a tree and, depending on the age of the trees, to look up to 200 years back into the past.

All three methods cover different time scales: Through aerial photographs, Savi can reconstruct the past 50 years, dendrochronology allows conclusions to be drawn for an age of up to 200 years, and the analysis of cosmogenic nuclides even allows scientific statements to be made about the past 2000 years. The researcher is particularly interested in the current implications of climate change: “I want to use my observations to identify what is happening in the present and what has changed in recent years and decades compared to today.”

In the future, a further increase in rock falls can be expected, which is why measures must be taken to protect people, residential areas, and infrastructure in mountain regions. In addition, new tourism concepts will be needed to ensure that the Alps can be used safely as a recreational area in the future. Sara Savi’s research project and her findings can help to develop such concepts.

In her project “Effects of climate warming on debris flow activity and sediment supply in high mountain regions”, Dr. Sara Savi uses different geological methods to record severity and frequency of debris flows and rock falls in a study area in South Tyrol.