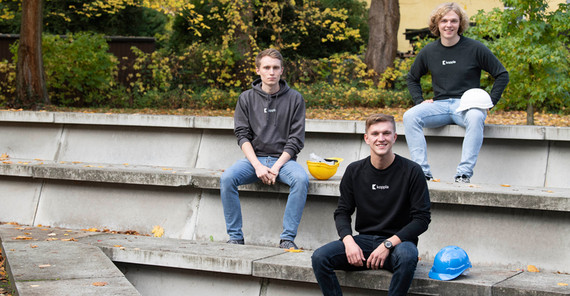 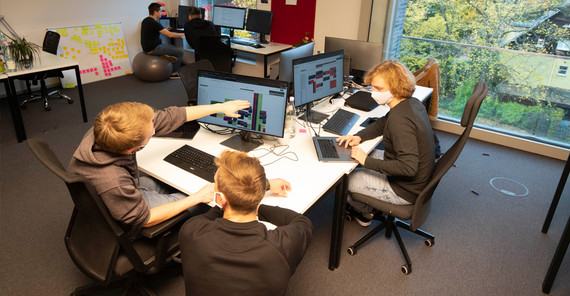 Photo : Thomas Roese
Lasse Steffen, Marco Trippler, and Jerome Lange (f.l.t.r.)
Photo : Thomas Roese
The three “koppla” founders in their office
“We want every craftsman and woman to work with our software – because it is easy to use and simplifies many processes. At the end of the day, it helps clients and contractors save money,” Jerome Lange says. Lange is one of three university graduates who founded “koppla” – a Potsdam-based start-up developing software for small- and medium-sized enterprises in the skilled crafts sector.

People work with concentration and in good spirits amid creative chaos in their office. Motivational and funny slogans cover the walls, a toy blaster and rubber bullets are scattered around the room. Today, two staff-members are present, plus founders Marco Trippler, Jerome Lange, and Lasse Steffen. The rest of the 14 team members are working from home. “Some of them work for us as remote employees from places as far as Munich, for instance,” says Trippler, adding that the company has grown considerably in recent months. “We started out as a group of three, and now we are already 14. And everyone is badly needed as we have a lot of work to do.”

The three young men founded “koppla” after Trippler, a graduate of business administration, worked for craft enterprises where he noticed that processes – especially communication between the office and the construction site – needed to be simplified. “Of course, software applications for the crafts are already available. However, they are difficult to use, and as they don't make processes easier they are, understandably, hardly used. Coordination still happens via messenger pigeons, so to speak – piles of paperwork, and phone calls.” Lange explains what makes the “koppla” software better: “On construction sites, many steps are necessary: cement is poured, electricians need to get into the house, and windows are installed. There is a certain sequence of work which also means that the previous steps have to be completed before the next step can begin.” Yet delays may occur when material arrives late, or craftsmen face challenges holding up construction. In this case, the next trade needs to be informed. “Our software makes this easier,” Lange promises. A workman on site can document construction progress. “With just one click he can confirm that he has completed his task and upload reference photos. There are checklists to go through, and working hours are easy to record as well, which is important for invoicing.” Co-founder Lasse Steffen adds, “The client may also be given access to the data, or some of the data, to follow the construction progress. That way, he does not have to ring up as often, which saves time.” The software will also help the site manager save time. “These days, a site manager spends three to five hours a day on the phone – including two to four hours on recurring communication. Our software helps reduce this as workers can upload data via smartphone.” After all, the “koppla” software was made to help companies save valuable time. “Coordination and planning are made easier, and the software is so easy to navigate that anyone can use it,” Lange says.

But to make it this user-friendly was the real challenge for the developers. “We had this idea and asked ourselves: How can we simplify it even more? This was the true challenge,” Steffen says. Sure enough, it did not temper their enthusiasm. “Startup companies like ours will inevitably face a range of challenges. But we never thought of giving up,” Lange adds.

Taking off with the right idea

Together with Potsdam Transfer – the startup service of the University of Potsdam – the company founders made it. “We presented our idea at a very early stage, and were provided with all the necessary know-how. We had the opportunity to attend workshops, and were granted a fixed amount of consulting hours,” Lange explains. Potsdam Transfer also gave them their first offices in the MediaTech Hub Accelerator. In the meantime, “koppla” has learned, slowly but surely, to stand on its own feet and moved to downtown Potsdam. In addition, they now have a mentor at the Digital Engineering Faculty: innovation management and entrepreneurship expert Prof. Katharina Hölzle. And last but not least, the Hasso Plattner Institute liked the idea so much that the HPI Seed Fund invested in “koppla”.

Marco Trippler, who studied business administration at the University of Potsdam, himself worked in the skilled crafts sector, whereas Lasse Steffen has a technical background – he studied at the joint Digital Engineering Faculty established by the University of Potsdam and the Hasso Plattner Institute. Just like Lange, he is familiar with the start-up scene. The three have even learned to fall and get back up again: Before founding “koppla,” they tried their hand at a babysitting app, but quickly discarded the idea. “A babysitter app. How stupid is that,” Trippler says. “But we realized that we can work together very well,” Lange adds. “And then Marco called, with this extremely good idea.”

And the idea is well received by companies, too: The easy-to-use platform is equally suitable for large general contractors and small craft businesses. It is already being used by large companies such as MBM and Schrobsdorff as well as smaller businesses including glaziers, advertising technology firms, painters, and roofers. In consultation with the first customers, the software is being further enhanced. “Our product team is in constant exchange with these companies so that we can improve our software and make it even more user-friendly. Special requests will not be considered, but when a point is raised by several companies we understand that there is a general need for it and develop our software further,” Lange says. What matters most to the young entrepreneurs is that their software is easy to use and bundles communication channels in such a way that it reduces the workload in craft enterprises noticeably. After all, they want “koppla” to find its way into every craftsman's toolbox in the next few years. “It is going to become the new tool for every craftsman,” Lange says.

Marco Trippler (24) got his bachelor’s degree in business administration from the University of Potsdam. Before founding “koppla”, he worked in a number of craft enterprises.

Lasse Steffen (23) got his bachelor’s degree from the joint Digital Engineering Faculty established by the University of Potsdam and the Hasso Plattner Institute. Before founding “koppla”, he worked for SAP in Los Angeles and gained some experience with start-ups.

Jerome Lange (24) got his bachelor’s degree from the University of Applied Sciences in Berlin. He studied politics and economics and worked in start-ups in Berlin before he became one of the co-founders of “koppla”.