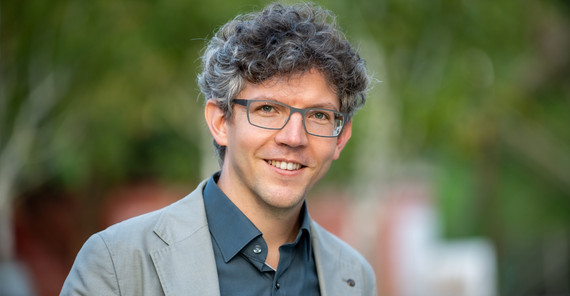 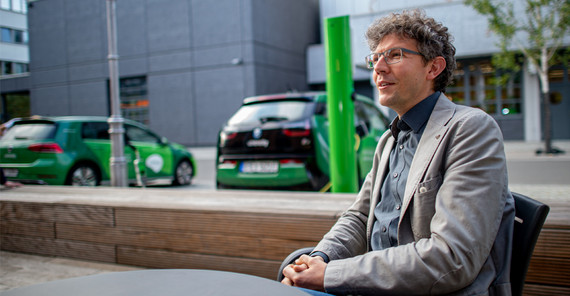 Photo : Tobias Hopfgarten
Prof. Matthias Kalkuhl
Photo : Tobias Hopfgarten
Prof. Matthias Kalkuhl in interview
Every morning, on his way to work at the Mercator Research Institute on Global Commons and Climate Change (MCC) in Berlin, Matthias Kalkuhl passes by the historic Schöneberg Gasometer, a former gas holder. Since September 18, 2019, a red digital clock has been displayed on its metal frame. It is a reverse-running carbon clock, 40 meters long and ten meters wide, so that it can be seen from afar. The clock indicates how much time is left to limit global warming to 1.5 degrees Celsius, the target laid down at the Paris World Climate Summit. The clock will continue to run for another seven years or so before the carbon budget is used up – unless we succeed in curbing CO2 emissions.

Every day, researcher Matthias Kalkuhl works to buy the world a little more time in the fight against climate change. He studies what can be done to slow down the countdown to the zero point, and how to translate the research findings of climate science into practice. His toolbox contains economics and climate policy – research fields he entered in a roundabout way.

“I had no idea or conception of economics,” Kalkuhl says in retrospect. His career in research started off with a degree in natural sciences: In applied systems sciences, everything revolved around mathematics, computer science, and the way chemicals and pollutants spread and accumulate in the soil and the atmosphere. An internship at the Potsdam Institute for Climate Impact Research (PIK) introduced him to a new perspective on global warming. And he realized: “The climate problem has to be seen as an economic problem, too. Economics has huge potential for analyzing environmental problems – and for solving them as well,” Kalkuhl explains.

Today, 37-year-old Kalkuhl heads the MCC’s working group on Economic Growth and Human Development and is Professor of Climate Change, Development, and Economic Growth at the University of Potsdam. Here, he researches what an efficient, cost-effective, and socially just climate policy could look like, and how sustainable growth could be achieved.

For him, growth and climate protection are not mutually exclusive. Quite the contrary: “Climate protection in fact enables long-term economic growth,” as economic research into climate-related damage has demonstrated. Economists like Kalkuhl look dispassionately at the figures and balance the costs of climate protection measures against economic losses. From this perspective, climate protection is worthwhile whenever the economic damage caused by climate change is more expensive than the respective protective measures. Recent studies have made it increasingly clear that global warming of more than 2°C will be particularly expensive for the economy. “If we don't protect the climate now, we'll be enormously angry about it in 50 years’ time,” Kalkuhl says.

Even now, the damage caused by global warming runs into the billions every year. Kalkuhl and his research team have calculated the economic consequences in great detail: Using statistical methods they analyzed how CO2 emissions affect the gross domestic product (GDP) in various parts of the world. For this, the researchers used more than 35,000 data points and time series from 1,500 world regions collected over many years. Their analyses revealed that the warmer it gets, the more economic output falls.

The effect is most evident in tropical and subtropical regions that are already very hot. Yet in temperate latitudes, global warming causes a drop in GDP, too. “We see harvest losses, a decline in labor productivity, and air conditioners requiring more electricity,” Kalkuhl describes some of the reasons. The result is sobering: “For every degree of global warming, global economic output drops by two to four percent.” Only a few polar regions benefit from higher temperatures. Today, every ton of CO2 emissions generates follow-up costs of between 80 and 150 euros. “If we fail to act, global economic output will permanently drop by up to 14 percent by the end of the century,” Kalkuhl explains. Just for comparison, if we take the average wage in Germany, a 14 percent reduction would mean a drop by 350 euros per month.

So the economic consequences of climate change can already be specified. And Kalkuhl also knows of an effective way to reduce carbon emissions and start the transformation towards a climate-friendly economy and society. A carbon tax would have several positive effects, as Kalkuhl explains. If fossil energy becomes more expensive, this will provide a stronger incentive to save energy. At the same time, it would become worthwhile to invest in alternative energies. In addition, ideas for a post-fossil, sustainable economy would get some innovation push – the carbon tax has the potential to transform all sectors of the economy.

The underlying idea is 100 years old: At the beginning of the 20th century, British economist Arthur Pigou introduced the concept of externality – a form of market failure. He also considered air pollution caused by industrialization an externality. Pigou realized that industrial emissions incur follow-up costs that fall on the general public: Buildings and clothing had to be cleaned more frequently. In Manchester alone, this resulted in additional costs of £290,000 per year. Pigou made an unusual yet plausible suggestion:

The costs resulting from industrial emissions could be offset by a tax on air pollution. This, he hoped, would encourage factory owners to adopt less polluting manufacturing processes. Known today as the Pigovian tax, it was the first concept to combine economic aspects with environmental protection.

In the 21st century, carbon dioxide is what soot and coal dust were in Pigou’s day. A carbon tax is based on the principle that the polluter must also pay for the social follow-up costs of his activities. “The destruction of nature and resource consumption come with a price that could be made visible this way,” Kalkuhl explains the principle. Most economists see carbon pricing as a useful instrument to carefully set the course for the future.

“To tackle the problem of climate change, a societal transformation is needed, and that involves costs,” Kalkuhl says. Increasing the price of fossil energy through a carbon tax would have a steering function, while the revenues from carbon pricing would provide the necessary leeway for decision makers to initiate this transformation. Especially here, the relevance of findings by researchers such as Kalkuhl to policy-makers becomes evident. “We are neither a think tank nor a consultancy firm,” he emphasizes. Yet the researchers deliver excellent findings and publish in leading international journals. Politicians are well aware of the researchers’ expertise – and appreciate it. The researchers on their part learn what matters in political decision-making, and what obstacles there are. “For instance, at the beginning, I completely underestimated how difficult it is for politicians to communicate a carbon tax to their voters,” Kalkuhl recalls. This makes it all the more important to make the tax socially fair.

Climate neutrality is the goal

Despite all hurdles, Germany introduced a uniform price on carbon emissions not covered by the European Emissions Trading System in January 2021. It starts at 25 euros per metric ton and will rise gradually to 55 euros by 2025. Given the calculated damage of 80 to 150 euros caused by each ton of CO2, isn't that price far too low? “Above all, it’s important to get started,” Kalkuhl explains. “However, companies and consumers need to know that there will be higher CO2 prices later on. Only then a sustainable transformation can begin.”

For the future, as greenhouse gas emissions now come with a fixed price, Kalkuhl expects significant and rapid changes: First, coal-fired power plants will become unprofitable and be decommissioned, Kalkuhl predicts. Gas-fired power plants will be used during peak consumption periods only. Investments in renewable energy will increase. Electric cars would be profitable without subsidies – as would be heat pumps and zero-energy buildings. Electricity tax and EEG levy could be abolished, making energy prices fairer. Especially poorer households could benefit from this development. Some of the revenue could flow back into industries facing very strong international competition and that have found themselves in a situation of great hardship since the introduction of the carbon price. The incentive to use low-carbon technologies would still be effective.

“It is important to do something at the international level,” Kalkuhl emphasizes. After all, the goals have already been set: With its “Green Deal,” the European Union strives to attain climate neutrality by 2050 – and a tax on CO2 emissions is planned at least for imports of certain goods from outside the EU. This is intended to prevent companies from moving to countries where emissions regulations are less stringent. Even China – currently the world's largest emitter of carbon dioxide – has set itself the goal of becoming climate-neutral by 2060. To achieve this, China has recently put a price on CO2 as well.

“These are encouraging signals,” Kalkuhl says. He has no doubt that the path chosen is the right one. A good example is Great Britain where a carbon price was introduced in 2013. Since then, coal consumption has dropped massively, and a number of coal-fired power plants have been decommissioned. In consequence, the carbon clock has probably been ticking a little slower, too.

Prof. Dr. Matthias Kalkuhl studied Applied Systems Science at the University of Osnabrück and received his PhD in Economics from TU Berlin. He has been Professor of Climate Change, Development, and Economic Growth at the University of Potsdam since October 2015 and heads the Economic Growth and Human Development Working Group at the Mercator Research Institute on Global Commons and Climate Change (MCC) in Berlin.
Mail: matthias.kalkuhluuni-potsdampde