The Core of Things – Comics, art, and culinary studies: Junior Professor for Cultural Semiotics and Cultures of Romance Countries Marie Schröer interprets the signs of the times 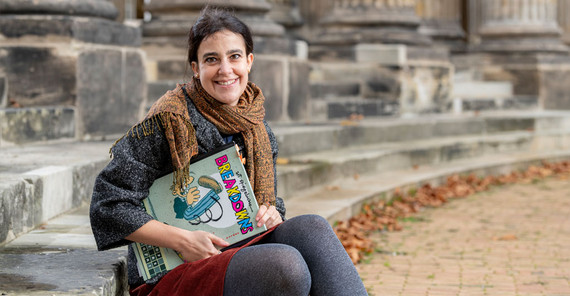 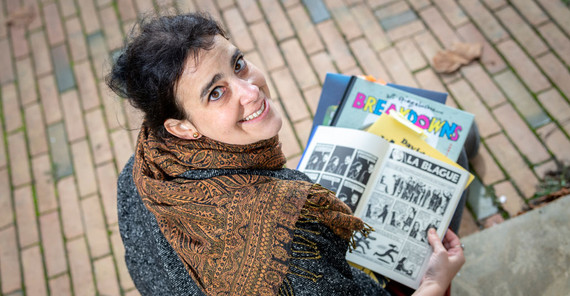 Photo : Thomas Roese
Prof. Marie Schröer
Photo : Thomas Roese
Prof. Marie Schröer
She is the daughter of a French mother: Little Nicolas, Tintin, Asterix and Obelix walked through the picture stories of her childhood. Growing up in the fabulous world of Franco-Belgian bandes dessinées, Marie Schröer never faced the problem of having to overcome the stereotypes that stick to comic strips in this country like adhesive tape: they are trivial and lurid, but above all funny - as the name suggests. “And that despite the fact that there are now a large number of comics, some of which have been filmed, with serious content,” says the literary scholar, adding that these often go under the label of graphic novel. At least since Art Spiegelmann documented his father’s Auschwitz memories in “Maus” and Marjane Satrapis told the story of an Iranian woman growing up against the backdrop of the Islamic Revolution in “Persepolis,” the artistic diversity and professionalism of the genre have become obvious.

With an open mind and scientific curiosity, Marie Schröer had already intensively studied comics as a student teacher for French and English at the University of Potsdam. Her lecturer, the cultural semiotician Eva Kimminich, supported her idea for an exam paper on drawn autobiographies. Even then, Schröer was fascinated by the seamless transitions between two different sign systems: text and graphics. She looked at graphic memoirs and explored the expanded scope of creativity that opened up to authors writing in drawings to artistically present themselves.

A few years of research later, Schröer submitted her doctoral dissertation “On the Interplay between Comics, Autobiography, and Bildungsroman” and defended it summa cum laude. “The usual narrative conventions of comics on the one hand and of autobiography on the other were suspended when they were being combined, and innovation virtually became the formal principle of this liaison,” she wrote in an essay. Instead of stereotypical heroes and adventurers, the focus is now on antiheroes, strong and weak, hopeful and full of doubts in their view of the world and the way they deal with their own history. Schröer refers to the example of Mirko Watzke, who stutters, flees into fantasy worlds, and passionately plays table tennis. The 13-year-old is the protagonist of the award-winning comic strip “Kinderland - A Childhood in East Berlin” in which author Markus Witzel, pen name mawil, recalls in autofiction his own childhood in the GDR.

When Marie Schröer tells her students about it today, she might show them the personal dedication that mawil drew for her. In this drawing, Schröer is kneeling in front of a box of old comics in a second-hand bookstore, which are 50 cents apiece. When she admits that she found a rarity, the bookseller spontaneously demands 20 euros. She’s sure to make everybody laugh along with her - and also prove that comics can still be funny.

About fake news and conspiracy myths

After working in Koblenz-Landau and Valenciennes, Schröer has now returned to the University of Potsdam as a Junior Professor of Cultural Semiotics and Cultures of Romance Countries. One of the projects closest to her heart here is a subject-specific online bibliography. Together with Prof. Kimminich, she is building a virtual center for cultural semiotics at the Department of Romance Studies, which will prepare the latest findings of semiotic research in such a way that they are comprehensible and useful for the general public. For example, what is behind conspiracy myths that spread like wildfire in times of crisis? How are images of the world and people passed on? How are stereotypes created?

Exhibitions, explanatory videos and study material co-designed by students are intended to encourage a critical debate in schools and educational institutions in the future. The center will also be a practice field for various forms of communication, for example for marketing, culture and education, or journalism. In 2021, the annual “Semiotic Week,” which Marie Schröer is co-organizing, will focus on fake news. How can I tell if a news story is real? What metaphors and rhetorical tricks are used, and what aesthetic preferences are nourished to spread conspiracy “theories”? Comics are also among the “Signs of Our Times” whose effect will be analyzed and discussed during the semiotics week of the same name. An online workshop, for example, will deal with the flourishing genre of nonfiction comics, which aim to impart knowledge, inform, and raise political awareness.

Schröer and colleagues from other universities are planning a symposium on the topic of "Race, Class, Gender & Beyond,” for the fall of 2021, which will focus on intersectional approaches to comics research. The VW Foundation has just confirmed funding for the international meeting at the Xplanatorium Schloss Herrenhausen in Hanover - a thrust of motivation for the junior professor.
During the short period that she has been researching and teaching in Potsdam, and which has been dominated by the pandemic, Marie Schröer has only experienced highly motivated students despite, or perhaps because of, the online formats, especially when it comes to the practical and creative parts of the seminars. Of course, podcasts, videos, posters, and comics are appealing means of expression, she says, whose own student years are not that long ago. The basis for all of this, however, remains intensive reading and writing, which she wants to encourage again, for example in a joint project of various seminars that deals with the cultural semiotic interpretation of masks – from the change of identity in carnival and the expression of protest to the currently ubiquitous protection against infections. Before students will produce explanatory videos about this topic and even build real masks, they will immerse themselves in different eras and cultures, learn about setting the scene for gods, saints, and demons in religious ceremonies, learn about the scold’s bridle, and, of course, study the characters behind traditional theatrical masks.

What comes next? Job profiles for graduates

To help students with their next career steps, Schröer is preparing a seminar on practical applications where graduates of cultural studies programs, and soon also of the cultural semiotics program, will report on their work in museums, theaters, and editorial offices. The Virtual Center for Cultural Semiotics will also provide a forum where alumni can present their profiles, master’s theses, and specific competencies and get in contact with companies and institutions, among them possibly also catering companies or cookbook publishers. After all, anyone who studies with Schröer will always learn something about culinary studies, especially about the phenomenon known as food porn, i.e. millions of photographs of food shared online. As in baroque paintings, the opulent staging of culinary still lifes currently knows no limits, says the scientist, who once again cannot deny her French roots here. In any case, this is a topic that works up your appetite.

Prof. Dr. Marie Schröer studied French and English for teaching and did her doctorate at the University of Potsdam where she has been Junior Professor for Cultural Semiotics and Cultures of Romance Countries since 2020.
Mail: marie.schroeer.1uuni-potsdampde