Planets – profession and passion – Prof. Katja Poppenhäger has found her niche in astrophysics 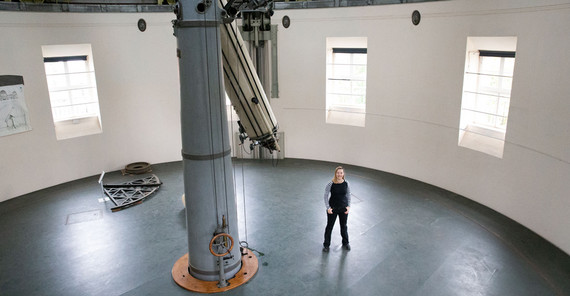 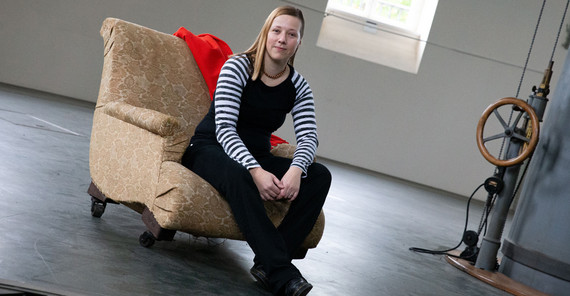 “Using a star spectrum, you create a color gradient for each star, which is as individual as a fingerprint,” explains the astrophysicist. “A spectrograph splits light emitted by the star into its component wavelengths - red at one end and violet at the other. The wobbly line of the diagram shows that the star shines brighter or darker depending on the color. Thus the “Spectrum Path” on our site is a whole rainbow rolled out onto 30 meters!”

Astrophysicists collect light from space to learn more about the nature of cosmic objects such as stars and galaxies. Poppenhäger mainly studies exoplanets, i.e. planets that orbit other stars. These planets, which are sometimes still very young, hold a special fascination for the physicist. “Young exoplanets are only a few million years old. Their atmospheres have just formed. In our solar system, by contrast, we are talking about a few billion years.” To study the atmospheres of exoplanets, astrophysicists use a trick. "Exoplanets make a ‘transit’”, Poppenhäger explains. “When an exoplanet passes in front of a star from our direction of observation, we examine its atmosphere through the star behind it, which serves as a kind of background lamp.”

Functionality instead of romanticism

In the corridors of Humboldthaus, historical astronomical measuring instruments are exhibited behind glass like in a technical museum. On one wall there is a modern flat screen that constantly transmits live images from “STELLA” in Tenerife, a robotic telescope of the AIP. English-language magazines of “Sky & Telescope” are stacked on small side tables; titles such as “Galactic Hoola Hoop”, “Cascade of Galaxies”, and “Asteroid Recon Surprises” arouse curiosity even among non-professionals. This is the world of the AIP. This is where Poppenhäger spends most of her working time. “I download observation data from the server of the European Space Agency (ESA) or the National Aeronautics and Space Administration (NASA) and search for new information about planets,” says Poppenhäger. “What I enjoy most is testing my own ideas. The universe holds every conceivable fantastic possibility and I find it exciting to see whether it answers my questions with ‘yes’ or ‘no’.” What goes through her mind when she sees a falling star in the night sky? “Personally, I don’t enjoy stargazing that much, as romantic as you might imagine it to be,” she openly admits. “I’m more interested in how does something work? To have a realistic chance within one’s own lifetime to check several theories, to collect and program data myself - I have found this mix of activities exciting and varied for over ten years now!”

For a long time, it was not clear which direction Poppenhäger would take in her career. “I’m not one of those people who always knew what they wanted to become. I found being an astronaut quite interesting, but as a child you don’t really have an idea of what a scientist actually does. I thought more about becoming a firefighter or a veterinarian ...” She liked science subjects at school, and after graduating from high school, she studied physics in Frankfurt/Main. Since she was not quite sure which career path to take, she worked in the private sector for a while. In 2011 – she was living in Hamburg at that time – the physics graduate attended research groups in environmental physics, particle physics, astrophysics, and biophysics. Eventually, she joined the astrophysics group of Jürgen H. M. M. Schmitt, who had a vacant PhD position at the Hamburg Observatory. “This is how I found my niche in astrophysics,” she says with satisfaction.

You sometimes have to leave your comfort zone

Poppenhäger is the first in her family to have an academic degree. “My father was a civil servant and my mother a bank clerk. I often went to the library with my parents and came home with a huge stack of books,” she recalls gratefully. “I’m an only child, so my parents were able to really encourage my interests, even if they didn’t have a connection to these fields themselves.” Meanwhile, Poppenhäger has become a mother herself. Her four-year-old daughter asks her with keen interest about what she does at work every day. “Then I tell her about my star observations, that I write texts explaining what the stars do, or that I meet with my students.” Another person who has had a profound influence on Poppenhäger’s career is Andrea Dupree, who is also an astrophysicist. The two met at the Harvard-Smithsonian Center for Astrophysics (Cambridge, USA), where Poppenhäger was a young postdoctoral researcher from 2012-2015 and Dupree a senior astrophysicist and associate director. “Every morning at 10:30, there was a short coffee break meeting where everyone who had anything to do with stars and planets met. Dupree always wore colorful clothes, had fantastic hair, and talked loudly and excitedly,” says Poppenhäger, describing the “grand lady of stellar physics”, as she calls her. “Dupree taught me that you shouldn’t hold back, that you should sit in the front row at conferences, that you can – and must – ask Nobel laureates questions without being shy. From her, I learned that the academic world is also about being seen and that you sometimes have to leave your comfort zone.”

Thanks to her time as an assistant professor at Queen's University in Belfast, Northern Ireland, Poppenhäger has also been able to stand her ground in teaching, at conferences, and with various publications. Since 2018, she has been at the AIP in Potsdam, where she now leads a team of about 20 employees. As a woman, she says, she is still a bit exceptional in this field, even though some things have improved. “If you count the men and women in my research group, the numbers are pretty balanced. But that’s not so surprising in our niche of exoplanets anymore. It’s a young research field, so there are a lot of young female researchers.” There are, however, still conscious and unconscious reservations, as can be seen, for example, when it comes to the application process for the use of the Hubble telescope. “For the past two years, there has been a double-blind selection process in which the application documents don’t reveal the applicant’s name and, therefore, also not the gender. The chances to be successful used to be evidentially lower if the name didn’t sound white and masculine – now the numbers are even.”

Does the large mural behind her show the Hubble telescope? “No, that is a photograph of the LBT (Large Binocular Telescope) for astronomical observations in Arizona, USA,” Poppenhäger explains. With its two mirrors, each with a diameter of more than eight meters and resembling the eyes of a face, it is currently one of the world’s largest optical telescopes, she says. “With the LBT, we gaze at a star, collect its light, and explore the atmospheres of already known exoplanets.” Poppenhäger describes different scenarios from everyday research that are used to discover new exoplanets. “In the morning, I check the newsletter of the arxiv website, a preprint server with preview versions of astronomical papers. Sometimes you find things like ‘Colleagues from Arizona have discovered two new exoplanets,’ and you think ‘I should definitely take a look at the atmospheres of these two’. With a bit of luck, something like that also happens to you while you’re searching for planets. For example, a graduate student once stormed into my office and excitedly exclaimed, ‘I’ve found transits of three different planets around the star K2-133!’” After all, in the first few months of 2020 alone, her colleagues around the world found 10-20 exciting exoplanets.

The universe often does the most boring things

“However, the universe often does the most boring things instead of the most exciting! You have to get used to that emotionally, just as you have to get used to rejections of research proposals, by the way. I think for many people this is the hardest part of the job, that a rejection is more likely than an approval.” The astrophysicist is aware of the fallibility of scientific results. “What we do isn’t perfect because there are many research results that are based on correct data and that made sense in the context of their time, but whose interpretation has been disproved by now.” That does not discourage a passionate physicist like Poppenhäger, on the contrary. “I credit myself with doing research as well as I can, based on what we know today. Because if I didn’t do anything at all, humankind wouldn’t be any smarter in 100 years!” Thus, the astrophysicist indirectly also addresses questions such as: Are there planets that could be habitable? Does planet xy in the end still have an atmosphere? Has life perhaps already developed on it in the form of microbes? The most exciting question of all for her is still whether one can find evidence of life on other planets. “I think that the development of life is not that rare. I think we’ll find a planet with strong evidence of life before I retire - but in the end it is, of course, a matter of luck!”

How does someone relax in her free time who deals with literally earth-shattering questions every day? Poppenhäger likes to exhaust herself physically. She practices historical sword fighting, an unusual sport that she came to rather accidentally. “A few years ago I was in Boston at a fantasy convention, where I took part in a trial course in historical sword fighting – basically fencing using techniques from medieval manuscripts. I was so impressed that I signed up for the club on the spot. Fortunately, there is also a sword fighting group at the Academic Sport Center in Potsdam. It is absolutely the right sport for me; it clicked immediately! You have to improvise - sometimes a tenth of a second counts - and be present in the moment, not think about the future. That grounds you.” That she does not read horoscopes as an astrophysicist, is unsurprising. “I am a realist at heart, absolutely!” The astrophysicist still has a big dream though. “If I had too much money due to a crazy coincidence, I would like to fly to the ISS. To get a real feeling of how the earth floats as a ball in space would be amazing!”

Prof. Dr. Katja Poppenhäger, expert on planets around other suns, has been head of the Stellar Physics and Stellar Activity Section at the Leibniz Institute for Astrophysics Potsdam (AIP) since October 2018 as well as a joint professor at the University of Potsdam.
Mail: kpoppenhaegeruaippde