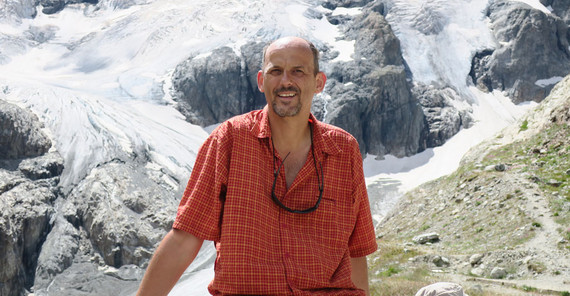 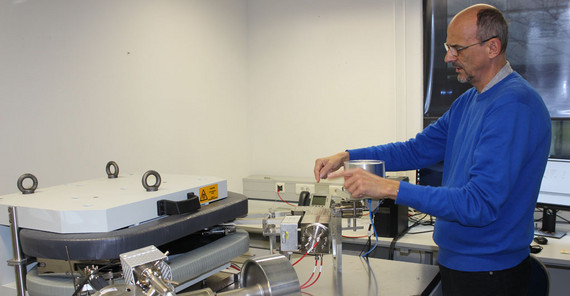 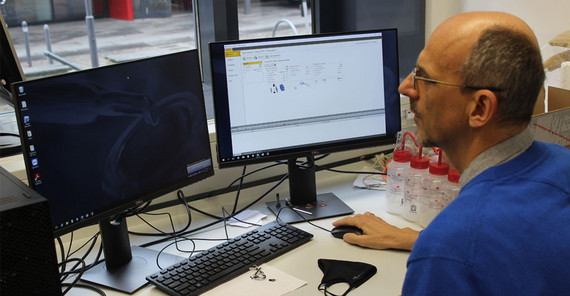 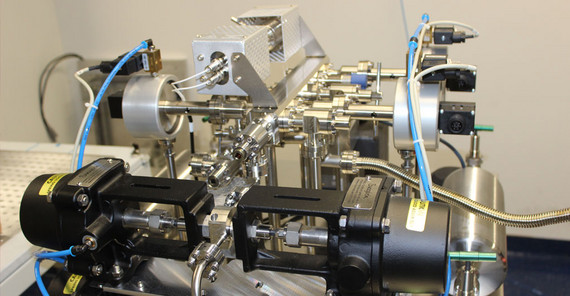 Photo : T.F. Schildgen
Peter van der Beek during a sampling campaign in the Alps
Photo : Dr. Simon Schneider
Peter van der Beek explains how ³HE and ⁴HE are separated and measured independently.
Photo : Dr. Simon Schneider
Digital data acquisition via specialized software – Peter van der Beek shows what the data from the mass-spectrometer look like.
Photo : Dr. Simon Schneider
Gas treatment unit – gas from the heating process of samples will have to be cleaned and processed before it is sent to the mass-spectrometer.
Peter van der Beek has joined the academic leadership at the Institute of Geosciences at Potsdam University. The internationally well-known Earth scientist not only enriches the Potsdam research portfolio with his outstanding expertise in tectonics and surface processes, but also brings in a new and eagerly anticipated noble-gas mass spectrometer. This high-tech instrument is funded by an ERC Advanced grant. Peter is internationally well known as a tectonic geomorphologist, working on a better understanding of the processes related to mountain building and the evolution of large mountain ranges. To elucidate and understand the mechanisms that control those processes, he combines numerical modelling of erosional processes and long-term landscape development with the quantification of exhumation and erosion histories using low-temperature thermochronology and cosmogenic nuclides. Thus, he looks at the smallest atoms to understand processes that form and characterize the evolution of landscapes on continental dimensions.

Since Peter’s appointment as the new Professor for General Geology comes in the midst of a re-structuring process within the Earth sciences at the University of Potsdam, Simon Schneider, coordinator for the Research Focus Area Earth System Sciences at Potsdam, asked Peter about his expectations and ideas.

Simon: Peter, your expertise as tectonic geomorphologist adds new insights to a topic that has a long and highly successful academic history in Potsdam.  Your research of the interactions of tectonic mountain uplift and climate driven erosion initiated a prosperous cooperation with Manfred Strecker and other scientists from Potsdam and Berlin. Now, you will introduce some new aspect of thermochronology and geomorphology to the UP research portfolio. Thus, you started to build a new workgroup at the institute. How many scientists will work in your group?

Peter: Within the ERC project directly related to the mass spectrometer, there will be five people working besides me. A lab-manager and two post-docs have started officially on the 1st of January. The lab manager position will become permanent after 3 years.

In addition, two PhD students will start probably at the end of 2021 (depending on how quickly we can get the instrument to operate routinely and how the corona-restrictions on fieldwork will evolve).

These are only the people directly involved in the ERC project. I hope the group will become larger than this, as other people join. There is currently already one PhD student working on a separate topic (Ling-Xiao Gong) and there are several applications for post-docs and PhD’s pending.

Peter: During the duration of the ERC project, the instrument can only be used for project-related measurements. However, once the project has finished the spectrometer will be open for collaborative projects with other groups in UP and from outside. I already have contacts with interested groups at GFZ and at my former group at the University of Grenoble, and am confident that there will be many people interested in collecting data with this instrument.

Simon: How does the spectrometer add to the existing infrastructure in Potsdam and within the Geo.X Network? As of today, a similar instrument already exists at the GFZ, as far as I know.

Peter: It adds to the existing infrastructure by allowing to measure very small quantities of 3He and 4He very precisely. We use this to obtain a very high-resolution cooling history from single apatite grains (the size of a grain of sand): after irradiating the grains with protons to induce 3He, we slowly heat them and extract the 3He and 4He in numerous steps, to measure their relative amounts with the mass spectrometer. This allows us to “map” where the 4He is sitting in the grain. The 4He is produced by radioactive decay of Uranium and Thorium but it diffuses out of the grain at higher temperatures. This “mapping” of the He-distribution in the grain thus allows us to reconstruct the cooling of the grains as they were brought to the surface by erosion (as the temperature increases downward in the earth, rocks cool as they move toward the surface). The general technique is called “thermochronometry” and there is already a thermochronometry lab in the department (supervised by Ed Sobel), where we can do “standard” (U-Th)/He measurements. The new 4He/3He technique however adds a lot of precision and detail to the method.
There is a similar instrument at GFZ but it is used for a quite different purpose: mainly to measure 21Ne in quartz and other minerals. That allows reconstructing how long a mineral grain has been sitting at the Earth’s surface (and bombarded with cosmic radiation, which creates the 21Ne atoms). These instruments are very finely tuned to measure the lowest possible quantities of these noble gases, and switching from one to the other would take months of new fine-tuning. This is why we need dedicated instruments for each application.

Simon: What are the key questions you want to answer by using the spectrometer? As far as I understood, the spectrometer will help to get information about the age and some physical parameters at the origin of the analyzed samples?

Peter: In the specific case of the ERC project, I will use the information on the cooling history of the grains (and inferred local erosion history) to map out patterns of glacial erosion in space and time in different mountain belts (Alps, Pyrenees, Scandinavia, Andes) and thereby to better understand the controls on glacial erosion and the transition from non-glacial to glacial landscapes: when does that happen, how fast is the process, what are the erosion rates associated with it, what happens in different tectonic or climatic settings?

Simon: Thanks you very much, Peter, for this interview.

Peter van der Beek received the Humboldt-Award for outstanding research in respect to his work on thermochronology and geomorphology in 2018.  He has been a member of the Institut Universitaire de France, has been president of the EGU Geomorphology division and supervised numerous PhD and HDR theses. He has spent six months in Potsdam in 2019 developing the project that has now been funded by an ERC grant. The Dutch scientist, who has been a full professor at the Université Grenoble Alpes, decided in favor of Potsdam because of its extraordinary standing in the Earth sciences, the existing global research cooperation, the outstanding and unique research infrastructure, and the dense network of Earth System sciences in Potsdam and the Brandenburg – Berlin region.

More about the research at Peter`s workgroup at the University of Potsdam: https://www.uni-potsdam.de/en/geo/research/general-geology