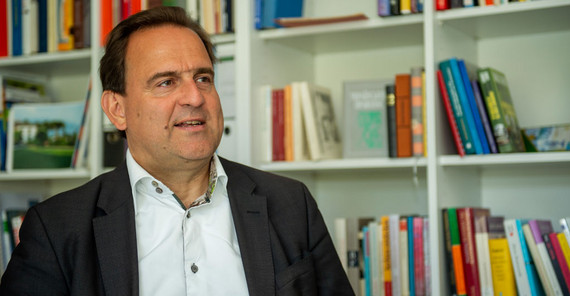 Photo : Tobias Hopfgarten
Prof. Alexander Wöll
Alexander Wöll is seated in front of his computer. Interviews are nothing new to him – answering questions via Zoom is, but that doesn't bother him too much. During his time as President of the European University Viadrina in Frankfurt (Oder) he was interviewed many times, and he looks back fondly on those years. Above all, the dedication of the students has remained with him. “It was an instructive time, and I am very grateful for the opportunity to learn so many new things in this capacity,” Wöll says. In 2018, he left the European University to make more time for research and teaching. “ That was something I really missed. After all, I had done my doctorate and qualified as a professor. I like research, and I like teaching, too.” So he accepted a chair at the University of Potsdam.

Wöll earned his doctorate at Ludwig-Maximilians-Universität Munich with a thesis on “Doppelgänger. Stone Monuments, Mirror Writing, and Usurpation in Russian Literature”. The double, or Doppelgänger is an important element in Russian history and thus significant for Slavists, too. For instance, in the 1760s and 1770s, the assassination of Tsar Peter III, prompted an upsurge in self-proclaimed false Tsars from Siberia and the Balkans to Central Europe. “Each of these pretenders, or samozvantsy, claimed to be the Tsar, though in fact he had already been murdered by that time,” Wöll explains. In his dissertation, he analyzed texts by numerous Russian authors – from Alexander Pushkin and Nikolai Gogol to Fyodor Dostoevsky, Osip Mandelstam and Vladimir Nabokov – identifying a range of Doppelgänger motifs.

But this thesis was just the beginning. Wöll, who had originally had a teaching post in mind, found himself drawn to research. For his professorial qualification in Regensburg, he presented a study of the life and work of Czech author Jakub Deml (1878-1961), who is seen as a pioneer of Czech Surrealism. Deml’s dream prose, which focuses on his own dreams, continues to fascinate Wöll to this day. His search through Bohemian and Moravian archives and libraries for Deml’s manuscripts and self-prints, which were banned until 1989, was quite a detective story. After intensive reading of texts by Teresa of Avila or Meister Eckhart, Deml creates, in the form of ecstatic mystical hymns, verbal images of an innovative power and beauty which in many ways anticipate such world-famous texts as The Library of Babel by Jorge Luis Borges or James Joyce's Ulysses. “A complete edition of Deml's work in thirteen volumes is being published in the Czech Republic right now, and I would dearly like to update my Demls book and publish it in Czech.”

Wöll’s research explores the diversity of the cultures and literatures of Slavic communities in interaction with other cultures in the states where they live. “I don’t think I could work with just a single language or with, say, Russia alone. I am fascinated by diversity, and prefer a comparativist approach,” says Wöll, a Slavist ‘all-rounder’ with a love of variety. So it comes as no surprise that Wöll’s many research interests should include gender and masculinity studies in Russia and East Central Europe – even though they arose more by change than design. “Actually I didn't want to take that direction, but when the editor kept calling, I finally agreed. This turned out to be a real stroke of luck, because it’s a very exciting field.” And one scarcely explored, as Wöll soon found out. Until then, only Russian human rights activist Igor Kon had published on the topic – and promptly run into enormous political problems. Wöll was one of the first German Slavists to research the field and thus helped launch an important debate. “Today’s Russia cannot be understood without its idealization of masculinity ‒ perhaps the only stable ideology that still survives in Russia.” Since then, many researchers have picked up on the topic as it provides an important point of access to Russia today, Wöll observes.

Learning from and with students

Wöll chose the University of Potsdam for various reasons. Even though its Slavic Institute is not the largest of its kind, it is well equipped compared to other universities. He likes the fact that he has the opportunity to supervise student teachers of Russian and Polish here, as teacher training is particularly close to his heart. And he appreciates the Interdisciplinary Russian Studies programme which is unique in Germany. “This is something I’ve been searching for a long time: a Slavic studies programme that intermeshes with economics and social sciences.” The master’s program in Eastern European cultural studies is currently being converted into a double degree program, in cooperation with the Higher School of Economics in Moscow and the University of Warsaw. In this program, the Ukrainian dimension is going to play an even more prominent role.

Wöll enjoys teaching and the interaction with students. “Working on my own in archives and libraries? That’s not for me. I am fascinated when students come up with ideas that might not have crossed my mind otherwise. A research institute with no opportunities for teaching would not be at all to my liking. Perhaps this is also due to the fact that Slavic studies is a manageable subject, lectures are not overcrowded, and those who pursue it have made a conscious decision to do so.”

Wöll was fascinated by Eastern Europe from a young age even though he has no Slavic roots. Every Saturday, he followed a Russian language course on Austrian TV. Today he speaks Russian, Czech, Polish, and Ukrainian, and understands some Belarusian. Besides, he taught himself Yiddish and Biblical Hebrew during his time as a university assistant in Regensburg. He loves the literature, music, and culture of Slavic countries. “I feel a close affinity with them, perhaps because I grew up in the countryside, too. In American studies, you end up studying large cities whereas Slavists often deal with rural areas and indigenous peoples, in places like Siberia, for instance, as well as everyday life in the countryside in general.”

Although for a Slavist reading books is a professional obligation, Wöll has never lost his love of literature, whether for work or for pleasure. “I always feel very privileged to have the chance to do it,” he says. And yet, at the very beginning his career choice was sometimes eyed with suspicion in his native Allgäu region. “Every Monday I regularly took the train to university, and at some point the station attendant asked me where I was going. When I told him what I was studying he asked ‘Whoever is making you do a thing like that?’” Wöll remembers. “Given the rather gloomy career prospects, I probably pressed on with my studies almost out of spite,” he adds with a smile.

Wöll loves literature, and not just Slavic literature. “Unfortunately, I don’t have the time to read outside my subject area as often as I’d like to. Works by Tolstoy, Dostoevsky or Ivan Franko come in thick volumes, so that doesn’t leave much time for other things.” Wöll describes himself as a bookworm and dreams of writing a novel one day. “But I’m still waiting for the kiss of the Muse.” He admires authors like Peter Bieri alias Pascal Mercier, and Umberto Eco. “A brilliant writer and researcher – that’s what I would really like to be.”

Prof. Dr. Alexander Wöll studied German philology, history, and Slavic philology in Munich, Moscow, and Berlin. He has been Professor of Central and Eastern European Culture and Literature at the University of Potsdam since 2018.
E-Mail: awoelluni-potsdamde