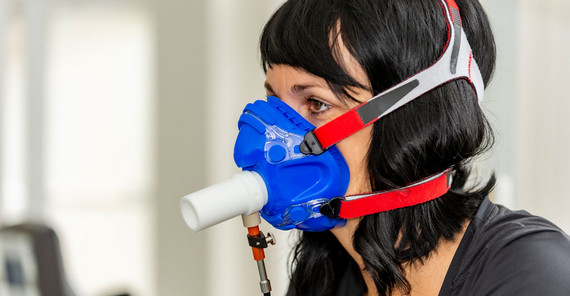 Photo : Tobias Hopfgarten
Mask for respiratory analysis
Together, a sports physician and a physicist set out to revolutionize a medical measuring and diagnostic procedure. Their goal is to develop an optical sensor for breath analyses. The new procedure is intended to lessen the drawbacks of conventional methods and deliver faster and more detailed results.

“Sometimes – like in a current project that involves members of the national canoeing team – we ask athletes to come here very early in the morning. At five o’clock when everything is still quiet. We ask them to lie down for half an hour until they are almost asleep. Then we start measuring.” Prof. Dr. Frank Mayer, Medical Director of the university outpatient clinic, wants his patients to be completely relaxed and calm as this is crucial for the ensuing test. The subjects have to put on breathing masks and are asked to continue to breathe calmly. An attached device establishes the oxygen and carbon dioxide in the exhaled air. Thus their energy consumption at rest is estimated. Physicians can use the results to determine the basal metabolic rate, an important parameter especially for athletes, as it helps them to optimize their nutrition and training.

A respiratory air analysis can actually provide even more information, in particular when exercising on a cycle ergometer or running on a treadmill. Spiroergometry, as it is called, is “an established method routinely used all over the world in general medicine, cardiology, pulmonology, and sports medicine,” Mayer states. “Respiratory gases enable us to draw conclusions as to someone’s physical fitness and metabolism, to diagnose diseases, and measure lung function.”

Hans-Gerd Löhmannsröben is not a physician, but Professor of Physical Chemistry, yet he has a scientific interest in respiratory air: “It is a very exciting object to study, and an important analyte that can reveal a lot.” Over the past decade, research in the field has virtually exploded. Among other things, doctors have learned that certain molecules in respiratory air can indicate diseases such as cancer or diabetes. “Respiratory air is always available, but also very complex in its composition. Using a sensor for the analysis of respiratory air could open up new possibilities in medical diagnostics,” explains Löhmannsröben who is, in fact, working on such new measurement and analyzing techniques.

“The exciting thing is that we are developing an optical sensor for it,” Löhmannsröben explains. In this project, the researchers use a dye the brightness of which depends on the concentrations of oxygen and carbon dioxide in the exhaled air. Through a mouthpiece, respiratory air is led onto a sensor network in which the dye – an organic ruthenium complex – is firmly anchored. So while air and dye molecules react with one another, a probe measures changes in the properties of the dye and delivers data with which the concentrations of gas can be calculated. In addition, the sensor is used to measure temperature and respiratory volume.

Faster, more precise and more detailed – these are the researchers’ expectations of the new sensor. First test measurements have been promising. The sensor must react very quickly to alterations, and the close proximity of measuring points in the first diagrams shows that it can meet these expectations. “The signal is robust, with little interference, it delivers smooth curves and more information than conventional measuring does,” Löhmannsröben is pleased to say.
Now the researchers are about to test the sensor in practice. It has to deliver reliable results when test persons are exercising on a cycle ergometer or running on a treadmill, too. “The project is still in its infancy – scientifically exciting, but also risky,” Löhmannsröben emphasizes. “So far, we have learned that the sensor can do a lot and produces better measuring results than other methods do. Now we have to find out whether this applies to all situations,” Mayer describes the challenge.

At any rate, Mayer sees enormous potential for medical applications. He expects not only better and more accurate measuring results, but also a more comfortable testing experience for patients. The conventional respiratory air analysis requires a well-fitting face mask to keep ambient air out. Consequently, patients have to breathe against a certain drag, which is uncomfortable for many. Especially under physical stress on a treadmill or cycle ergometer, when the body needs a lot of oxygen, a mask covering mouth and nose gives some patients an anxious feeling, and when they feel they are not getting enough air they reduce their performance on the ergometer – which is what sports physicians want to avoid in order to obtain meaningful results. “If we succeed in developing a sensor that doesn’t require a mask, maybe just a mouthpiece, measuring will become much easier,” Mayer explains.

The future of research lies in interdisciplinary cooperation

For physicist Löhmannsröben the project is uncharted territory, too: “It is the first time we are cooperating with sports physicians and working with human data.” Both partners had to adjust to the new situation and find a common language which has not always been easy, as they frankly admit. “Suddenly I was facing completely new situations. For instance, as we work with people, an ethics committee had to be called in – something I'd never dealt with before,” Löhmannsröben says.

Mayer and Löhmannsröben are convinced that the future of this research lies in interdisciplinary cooperation – especially with a view to the Brandenburg health campus which is currently being established with the University of Potsdam as one of three supporting universities. Their project is supported – as are other interdisciplinary projects – by the Health Sciences Network which consists of health scientists of the University of Potsdam and of non-university research institutions. To date, around 20 professors are working together here on projects from basic research to application. Also, “SensreD” forms part of the Fraunhofer Cluster of Excellence “Integration of biological and physicochemical material functions” for which the University of Potsdam serves as an anchor university.

In the coming months, the team from Physical Chemistry will be visiting their colleagues at the university outpatient clinic more often to fine-tune the method. Several groups of subjects will be testing the new measuring method here at rest, on a cycle ergometer, and on the treadmill, to put the finishing touches on this procedure. Finally, the sensor will have to prove its efficacy and reliability under everyday conditions in a clinical trial. If everything goes well, this could be the kick-off for future projects. “Respiratory air is so complex - we could analyze many more components and perhaps even develop a sensor to detect smallest particles, and therefore pathogens,” Löhmannsröben explains and adds: “There are a number of ideas and thoughts waiting to be explored.”

Prof. Dr. Hans-Gerd Löhmannsröben studied physics in Oldenburg, Göttingen, and Chapel Hill (USA). He has been Professor of Physical Chemistry at the University of Potsdam since 2000.
Mail: loehuchem.uni-potsdampde

Prof. Dr. Frank Mayer studied medicine in Tübingen. He has been Professor of Sports Medicine and Sports Orthopedics at the University of Potsdam as well as medical director of the university outpatient clinic since 2006.
Mail: fmayeruuni-potsdampde

The project “SensreD (sensor technology with functionalized optical fibers for respiratory diagnostics)” researches and develops an optical sensor for respiratory air analysis. The new method will be used to determine the content of oxygen and carbon dioxide in respiratory air, as well as breathing volume.

Participants: University of Potsdam, Chair of Physical Chemistry and Chair of Sports Medicine and Sports Orthopedics
Funding: Ministry of Science, Research and Culture (MWFK) of the State of Brandenburg, funding program STaF (strengthening technological and application-oriented research at scientific institutions in the State of Brandenburg) funded by the Brandenburg Investment Bank (ILB)
Duration: 12/2019-11/2021