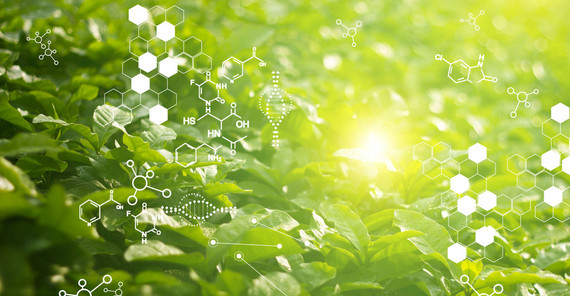 Ever since life has existed on earth, it has been happening every day: The genetic material of bacterial, animal, and plant cells changes through mutation. The building blocks of the DNA sometimes get mixed up when the double-strand breaks, for example due to UV radiation, and is then repaired incorrectly. Errors sometimes occur during the copying of genetic information which precedes cell division. There are many reasons why the genome of living organisms has been changing again and again for millions of years. Most mutations go unnoticed, some cause diseases or are even fatal. But some were so successful during evolution that they have given their carriers an advantage and have allowed new, more robust species to develop.

Such changes in the genetic material are also used in plant breeding. Humans select the specimens that are resistant to specific diseases, that have large fruits or taste especially good –characteristics that are the result of mutations. In traditional breeding, plants are interbred and sorted out for years before a variety with the desired characteristics is achieved. “It is a very lengthy process,” explains chemist and molecular biologist Lena Hochrein. She optimizes molecular tools that can be used to change genetic material not randomly but in a targeted way. This enables, for example, the breeding of new plant varieties much more quickly.

Revolution from the bacterial cell

The technology Hochrein uses for this process revolutionized the world of genetics and molecular biology almost ten years ago. The so-called gene scissors – known in technical jargon as CRISPR-Cas – are a complex of RNA segments and an enzyme, the Cas protein. In bacterial cells, this system is used to recognize viruses and render them harmless by cutting the viral DNA in specific locations. In 2012, however, the researchers Emmanuelle Charpentier and Jennifer Doudna discovered that CRISPR-Cas could do much more than protect bacterial cells from intruders because the genetic scissors could be used to alter the genetic blueprint of every cell - quickly, precisely, and on-point.

Since then, there has been a sense of excitement in molecular biology, and experts from all over the world are working on expanding and refining the method. “CRISPR-Cas is incredibly valuable not only for those of us in plant research, but also in medicine,” emphasizes Hochrein, who has already worked successfully on regulation systems for biosynthetic pathways in her doctoral thesis, for which she received the Potsdam Young Researcher Award in 2018. One day, hereditary diseases might be cured with this genetic tool.

The gene scissors can be manipulated in such a way that they become active at predetermined genome sections and cut the DNA strand to specifically alter the regulation of certain genes. What’s more: New genetic information can be introduced at the cut strands. This genetic information is prepared in the lab in such a way that it docks exactly between the intersections. “Our goal is to make the genome editing in plant cells more efficient and to be able to better and faster identify the successfully edited cells,” explains Hochrein.

Therefore, the molecular biologist must first produce suitable cells in the laboratory in which she then can use the genetic scissors. The researchers cut millimeter-thin strips from leaves of thale cress and tomato plants that are only a few weeks old and let them float in an enzyme solution. After a while, the solution turns green and the leaf strips dissolve.

Under the microscope, spherical cells – so-called protoplasts – become visible. They no longer have a cell wall and are now ready for the genetic scissors. “These cells are very fragile and you have to be careful not to rupture them while working,” says Hochrein. On a special nutrient medium, these protoplasts are later supposed to grow into a so-called “callus” - a proliferating green cell cluster consisting of nothing but undifferentiated cells. Leaves and shoots only develop from them after a special treatment, and in the end a complete plant.

Experts call the insertion of foreign gene sections into the cells “transfection”.
Until now, the DNA fragments to be transfected and the CRISPR-Cas gene scissors are fed separately into the cell culture. Hochrein and her team want to modify this procedure and link the foreign DNA directly to the gene scissors. They hope that this will increase the success rate of transfection. In the laboratory, Hochrein and her team produce the respective molecular tools and develop the appropriate formulation. “Quite ordinary molecular biology,” the researcher calls it. “Cloning, transforming, and producing protein.”

Before testing this new complex, Hochrein is for now working on another important optimization step: Up until now, it took many weeks for the protoplast to grow into a callus and finally a plant. Only then could the researchers tell whether the genome editing was successful in a cell. Hochrein wants to use a new approach to test this on the protoplasts immediately.

To do this, for example, the researchers transfect DNA into the protoplast, which can repair a previously defective gene in the target cell by inserting the missing building blocks at the right place in the genome. If it works, the cells will fluoresce under the microscope. This way, the researchers can easily see which cells have been edited successfully. Such cells are singled out and cultivated with a special sorting machine. “That saves a lot of time”, Hochrein emphasizes.

Which genes in a plant are activated, switched off or specifically modified – with CRISPR-Cas all this no longer happens randomly. Hochrein is fascinated by the new possibilities, the technical challenges, but, above all, the potential solutions. “We are able to change gene activities through targeted mutations, for example to improve the crop’s resistance to drought or even to increase its vitamin content,” she explains. “In view of climate change and increasing crop failures we cannot wait another ten years for the right mutation. We have to come up with alternatives.”

Dr. Lena Hochrein studied chemistry at Technische Universität Berlin. In the research group of Prof. Bernd Müller-Röber, she deals with the regulation of gene activities and molecular tools. She received the Potsdam Young Researchers Award in 2018 for her doctoral thesis.
Mail: hochreinuuni-potsdampde

In the research project ENTIRE (Enabling technologies for RNP-mediated genome editing), molecular biologists develop new methods to increase the speed and efficiency of the genome scissors CRISPR.
Duration: 6/2018–12/2020
Funding: Federal Ministry of Education and Research (BMBF) within the program “Crops for the Future”