"Do We Want Artificial Intelligence to Administer Law?" – IT and media law expert Björn Steinrötter researches legal issues of digitalization 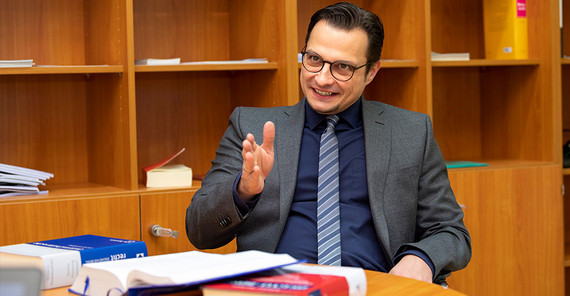 Photo : Thomas Roese
Prof. Dr. iur. Björn Steinrötter
He stands in front of students in the lecture hall, is the author of legal essays, commentaries, and manuals, and researches today’s most pressing legal problems related to artificial intelligence, bitcoin, and data management. He helps shape fields of law that do not yet exist. Steinrötter is Junior Professor for IT and Media Law at the University of Potsdam. He is one of 12 young researchers who were able to get one of the coveted tenure-track professorships that the University of Potsdam announced in 2018 with funding from the Federal and State Program. For the four open-topic professorships alone, the University received over 1,200 applications. And his career might have actually taken a completely different course.

Steinrötter is a trained banker. “My father advised me: ‘Complete an apprenticeship first. Then you’ll have a qualification if your studies don’t work out’”, he says and laughs. This concern, however, was completely unfounded. After he had finished his training, he decided to follow his dream and began studying law in Bielefeld. He was enthusiastic right from the first day of his studies, Steinrötter says. “In retrospect, it was a great time, one of the best times of my life.” Early on, he not only liked law but also academia. During his studies he already worked as a student assistant at Professor Staudinger's chair of civil law. The young graduate was less interested in legal practice, as he discovered during his judicial clerkship. “I initially wanted to become a lawyer. But it seems that I am not particularly keen on representing someone whose position I don’t share at all. So I turned to research all the more enthusiastically.”

No “judicial castles in the air”

After completing his doctorate in private international law in Bielefeld and his legal clerkship in Berlin and Sydney, the civil law expert started as a postdoctoral fellow at the Institute for Legal Informatics at Leibniz University Hannover in 2015. Under Professor Heinze, he familiarized himself with IT law – a decision he has never regretted. Of course, a certain basic understanding of computer science is indispensable. „But you don’t have to be a programmer either. The exchange with computer scientists, engineers, and practitioners is important and helpful,” he says, “and the feedback I get in this way ensures that I don’t drift off into ‘judicial castles in the air’”. Even heatedly discussed theoretical problems sometimes turned out to be rather far from reality, such as the classical example from the field of autonomous driving, which fills entire conferences: Several people are running in front of a self-driving car, and it has to decide whether to hit an elderly couple or a young mother with a child and to injure or even kill them. Can this dilemma be resolved ethically and then also legally? “An engineer, who looks at this situation, will certainly approach these questions differently. Apart from the very low probability that such a case will occur, the sensors and algorithms may not be able to reliably distinguish the mother and child from an older couple and may not be able to implement ethical guidelines as they are. This is because, unlike the deterministic ethical model of thought, sensors and algorithms are not able to determine whether injuries or death will happen. Reality, and thus programming based on probabilities, must deal with such uncertainties as a central aspect of accidents. Therefore, it is more about ‘risk ethics’.

IT law is an interdisciplinary field

Steinrötter transcends disciplinary boundaries, both in his field of expertise and in law itself. “IT law is what you would call an interdisciplinary subject. While things are traditionally classified according to the legal field, in IT law the object of consideration characterizes the discipline - in principle from all conceivable legal fields. Therefore, I am not able to cover the entire spectrum. I focus on aspects related to civil, data, and intellectual property law as well as conflict of laws.”

Recently, he has intensively worked on problems related to the booming world of crypto values such as bitcoin and the like, whose legal protection has barely kept pace with technical developments. “Such virtual currencies are traded across borders and their trade is decentralized. This leads to the question which law should apply to the individual transactions,” Steinrötter says. In the commercial law context, the law of the market place has usually been applied so far. This principle, however, has disappeared since such transactions are now carried out directly and decentralized without geographically locatable financial markets. Steinrötter explains that “you would then resort to the general rule that the national law of the seller’s country of origin should apply.” “But since an increasing number of such transactions take place pseudonymously or even anonymously, this leads to a new factual problem.”

Another special area of the IT law expert concerns the legal issues related to the increasing presence of robots and artificial intelligence (AI) in our everyday life. Steinrötter is Deputy Chairman of the Robotics & AI Law Society (RAILS), which brings together representatives from various disciplines for exactly this purpose. Among other things, he researches legal problems of geriatronics. “At present, there are many questions about the use of robots in care, especially in the care of elderly people. Who will be liable for technical defects and accidents? What about data protection? What are the requirements for IT security? ”, Steinrötter asks. In September 2020, a manual with over 1000 pages was published that discusses the most important current legal issues related to AI and robotics. Steinrötter is one of the editors. As with IT law in general, the specific challenge is to analyze to what extent the existing rules can adequately deal with the new questions. According to Steinrötter, “It sometimes seems as if the applicable laws no longer fit and new ones have to be created.” However, upon closer scrutiny, they often turn out to be farsighted and well-formulated and may only have to be interpreted accordingly or, if need be, specifically adapted. “In any case, the manual already looks far into the future and sometimes discusses cases that don’t even exist yet. That rarely happens in jurisprudence.”

The legal sector itself is currently experiencing a digital boom – due to the development of so-called “legal tech” applications. These include various forms of digitization: On the one hand, more and more smart tools enter the market. They are supposed to make the work of law firms and legal departments faster and more efficient. They can be used, for example, to automatically create simple pleadings, but their use can also make law enforcement faster and more efficient. “We can appreciate this as a starting point. At the same time, we have to ask ourselves: How far should this go?”, Steinrötter says and continues, “Do we want AI to handle all our lawsuits and, at some point, administer justice?” These are discussions that have been part of the legal informatics discipline since the 1950s, but have largely disappeared from the university landscape after a few decades of fruitful discussion. Now mainly legal practitioners advance similar debates, which today are known as ‘Legal Tech’. “These topics also belong at universities. You can’t evade them, no matter how you feel about them.”

For this reason, Steinrötter organized a two-day workshop on “Legal Tech” for the summer semester 2020 – both for computer scientists and lawyers. Together, the participants first work out the technical and legal basis for such a tool and then see whether it can solve real cases of a law firm. “Simple and minor cases can probably be processed faster with good software. But I am quite skeptical about the current hype. Our legal system does not follow any formal logic but a logic of values. It is not always about the binary decision whether something is right or wrong but justifiable or not justifiable.” He can therefore not imagine an automated system of jurisdiction. “But I have the feeling that a lot of young people would prefer to be convicted by a machine – because they hope it will treat them without prejudice. This is a fallacy. Algorithms and especially their training data can also have prejudices. But: Then we not only have one or two ‘crooked’ judges, but a whole ‘crooked’ system.”

For some time, the tourism industry has been experiencing a similarly rapid digital development and Steinrötter is also involved in “reclaiming” new legal territory here. He recently wrote up-to-date commentaries on the EU Air Passenger Rights Regulation and on travel contract law. He is also co-editor of the trade journal for tourism law “ReiseRecht aktuell”.

That his special field is anything but a well-trodden path is made clear by the fact that it is still only an elective in law studies. At the Law Faculty in Potsdam, he especially teaches media and business law and in the master’s degree program on media law at the Erich Pommer Institute, with which the University of Potsdam is affiliated. But that is likely to change – even within the classical disciplines. “An increasing number of areas of law will have to deal with digitization, such as labor, corporate or administrative law. In addition to the data protection law strengthened by the General Data Protection Regulation, there will be a commercial data law. After all, data have become an extremely important commodity.”

Prof. Björn Steinrötter studied law at Bielefeld University. Since 2019, he has been Junior Professor for IT and Media Law at the University of Potsdam.
E-Mail: steinroetteruuni-potsdampde