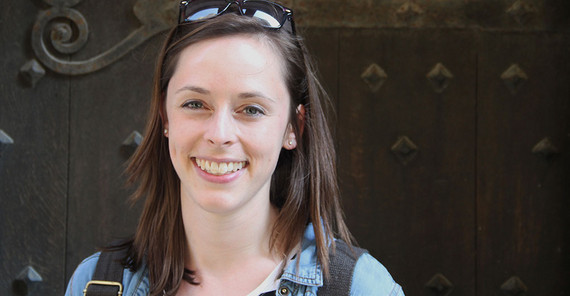 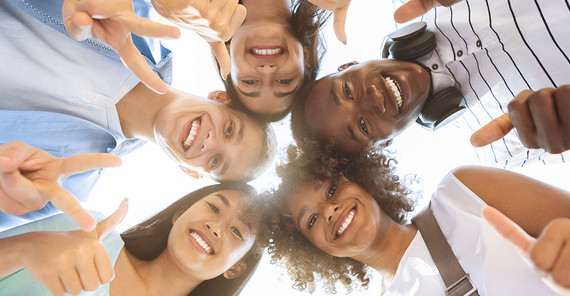 Source: Mohamed Elaskalani
Dr. Miriam Schwarzenthal designed a questionnaire suitable to assessing the intercultural competence of school students and the conditions under which they learn.
Source: AdobeStock/Prostock-studio
Cultural diversity is a strength

For some, “cultural diversity at school” is synonymous with hotspot schools. Psychologist Dr. Miriam Schwarzenthal does not share this view. She researched the opportunities that cultural diversity opens up in the classroom.

Reports on schools where children and adolescents from different cultural backgrounds learn together often focus on the challenges this diversity in the classroom poses while the various opportunities it creates are overlooked. The picture this paints ignores that diversity is also a great chance for many students. Psychologist Miriam Schwarzenthal was convinced of this when she decided to do her doctorate on the intercultural competence of adolescents in culturally diverse schools in Germany. There were not many publications on the topic, compared to, for instance, the mobility and intercultural competence of university students, which really surprised her. “I have been abroad several times, and these intercultural encounters have broadened my perspective significantly. Why shouldn’t the same be true for school students in a culturally diverse school in Germany?”

Viewing diversity as an opportunity

In her research, Schwarzenthal draws on theories from developmental and social psychology and combines them. How does age affect the intercultural competence of school students? What is the effect of contacts with other cultures, for instance in friendships? Schwarzenthal has collected extensive data on these issues from more than 95 culturally heterogeneous classes with adolescents aged between eleven and 16 in North Rhine-Westphalia and Berlin. In addition, she analyzed existing data sets from 88 schools in Baden-Württemberg. Since there were no tried and tested methods for establishing the so-called cultural intelligence of adolescents at the time, she developed them herself. “I wanted to design a questionnaire suitable to assessing the intercultural competence of school students and the conditions under which they learn. So I had to start by conducting interviews.” In the resulting questionnaire, she asked respondents, for instance, what cultural group they felt part of. “This is important for someone officially referred to as having a migration background. In my survey I wanted to establish the cultural identity of students as they saw it, and not impose anything on them. Besides, it enabled me to capture whether the perceived cultural identity of children and adolescents has an impact on the correlation between learning conditions and intercultural competence.” Schwarzenthal also designed tests for adolescents to evaluate descriptions of situations. After that, they wrote short essays on how they would have dealt with the situation. Their texts were then coded by two independent researchers based on a code book developed by Schwarzenthal and her supervisors.

Before the research at Berlin schools could start, a lengthy application process had to be completed: the Ethics Council, the Senate Administration, the school principals, and in some cases also the parents had to give their consent. The research itself was not exactly easy either, because asking for a parent’s country of origin, for example, is a delicate question. According to Schwarzenthal, other projects often focus on differences in performance. “So parents may have concerns about research and don’t want to support it out of fear that it will find, and publish, that their cultural group does worse in school,” Schwarzenthal says. But her perspective was a resource-oriented one: “The students grow up in more than one culture and speak more than one language. They can, and have to, find their place in different contexts and adapt different behaviors. All these are great strengths.” In her qualitative interviews, she was particularly impressed by the expert knowledge of students, and how reflective they were. “They knew a lot about the cultural backgrounds of their classmates. So they could tell, for example, why someone was not attending school on a particular day to observe a holiday.”

Schwarzenthal has analyzed and evaluated large datasets and published her results in five empirical studies. In the summer of 2020, she was awarded the prize for the “most outstanding dissertation 2019” by the Potsdam University Society. “It encourages me to see that my research is considered important. At the same time, I have a bit of an imposter syndrome, sometimes doubting whether I really deserve it,” Schwarzenthal says. An entirely misplaced fear, as her doctoral thesis fills research gaps and raises new, important questions. For instance, Schwarzenthal was able to demonstrate a positive correlation between intercultural friendships, the atmosphere in the classroom, and students' self-reflection, on the one hand, and intercultural competence, on the other. More important than feeling attached to a certain cultural background is that students actively reflect on their identity – for instance, the influence their socialization has had on their views and attitudes. Besides, Schwarzenthal was able to establish that the promotion of contacts and cooperation between students from different backgrounds by teachers has a positive effect on their intercultural competence. Just as positive is a multicultural approach at school that recognizes and appreciates diversity and encourages students to learn more about their cultural backgrounds and exchange experiences. These research findings are particularly valuable given the fact that e.g. the Organization for Economic Cooperation and Development (OECD) and the Council of Europe call for the promotion of intercultural skills which are becoming increasingly important in the globalized immigration society. “I hope my dissertation can help improve the public image of culturally diverse schools and make the resources of their students more visible,” Schwarzenthal says. Her research also touches on what teachers need to do to tap the positive potential of cultural diversity at their schools.

Where social injustice comes from

Through her research, Schwarzenthal not only gained important insights, she also encountered a number of new issues she is going to investigate as a postdoc at the University of Potsdam. For instance, too close a focus on culture has its downsides, too. “What is often overlooked is the fact that in culturally diverse societies opportunities and resources are not evenly distributed.” This may become an issue at school as well, Schwarzenthal knows: “Students may be denied a recommendation to continue their education at the Gymnasium (the university-track secondary school) because of their last name, even though they have the intellectual capacity.” Therefore, she now wants to research critical consciousness – the ability to critically reflect on where social injustice comes from, and how it can be reduced. Developed by Brazilian pedagogue Paulo Freire in the 1970s, the concept was subsequently adopted in Germany as well. “However, I am not aware of many empirical studies on critical consciousness. Only recently, US researchers have begun to apply the concept to adolescents. I think it’s about time to make an empirical educational contribution on the German context.” In a first step, she plans to conduct interviews to find out whether and under what conditions adolescents in Germany develop critical consciousness, and at what age. In a second step, the small-scale study with interviews will be complemented by statistical data to obtain a more comprehensive picture of critical consciousness among adolescents in Germany. From the perspective of educational science this is particularly interesting, as studies indicate that critical consciousness promotes engagement and performance at school, as well as the willingness to attend university. So helping school students develop critical consciousness might lead to an increase in the number of adolescents from stigmatized groups attending university, Schwarzenthal reasons – a goal worth pursuing!