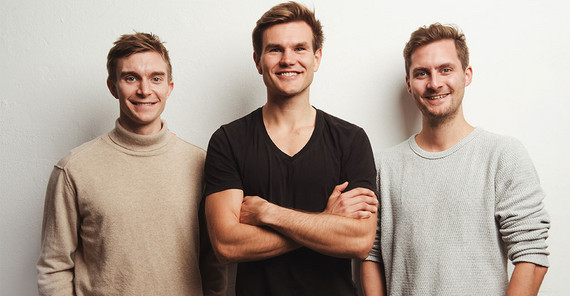 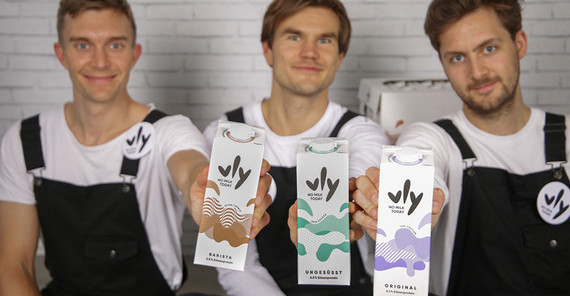 Photo : Vly Foods
The founders of „Vly Foods“: Nicolas Hartmann, Niklas Katter, Moritz Braunwarth
Photo : Vly Foods
The team of “Vly Foods“ – with pea milk
Oat, rice, soy or almond milk - plant-based alternatives to classic cow’s milk are trendy and in increasing demand. Nicolas Hartmann, Niklas Katter, and Moritz Braunwarth wanted to make use of this development: The three founders have developed imitation milk from peas. Since the end of January 2020, they have been selling their products in a first few Berlin supermarkets. The name of their start-up, which was supported by the University of Potsdam Start-Up Service, is “VlyFoods”. Dr. Silke Engel spoke to Nicolas Hartmann - one of the three founders.

First of all: I am a passionate whole milk drinker, traditionally produced and with a fat content of at least 3.8%. I prefer milk from cows with horns that is produced in the eco-village Brodowin. In my coffee at home, I only put milk froth from the original. If only coffee cream or long-life milk is available at the office, in hotels or restaurants, I do without and drink my coffee black. In that sense, I can’t really judge the taste of the milk made from peas by “VlyFoods”. I can’t compare it to other plant alternatives. This is the first time I’ve tried such a product and can only say: it definitely doesn’t taste like milk. But long-life milk is just as tasteless to me - I often jokingly call it “white water” at the office.

Pea milk is eco-friendly and healthy

The pea milk developers are particularly interested in the nutritional value of their products and their low-resource production. “Milk is everywhere,” says Nicolas Hartmann, who graduated from Oxford with a master's degree in financial economics, “but we believe that we will consume less and less animal-based food in the future. Industrial livestock farming is an obsolescent model.” That’s why the three founders want to change something. Processing peas releases significantly less environmentally harmful gas. “Per gram of protein, 15 times less CO2 is produced than in a cow,” Hartmann calculates. The entrepreneurs get the peas from northern France, while the alternative milk is produced in North Rhine-Westphalia.

Plant-based milk is also very popular with the young entrepreneurs for health reasons. In his previous career, Hartmann advised professional athletes who kept a vegan diet. He was also active himself in the German national youth basketball team. “Our plant-based milk alternative has a better nutritional value than cow’s milk,” he explains. "The unsweetened product even replaces skim milk and is unrivaled in terms of functionality and nutritional value: 50% more protein, no saturated fatty acids and also no 'short-chain' carbohydrates.” Hence the name “vly” – a hidden play on words. Hartmann explains the message behind it: "vly" stands for "fly" with a v for vegan. We want to be open to flexitarians. So we don’t especially mention the word 'vegan' too loudly. But one thing is clear: All of our products are 100% plant-based.

In order to expand their product range, they are already working hard on new products. The three founders can imagine everything with their pea alternative - from drinking yoghurt to low-fat curd cheese. This is where Moritz Braunwarth comes in. He has a bachelor's degree in food technology from Technische Universität Berlin and is responsible for product development. He gained professional experience as a chef at the Grand Hotel Tschuggen in Switzerland, whose restaurant “La Vetta” has a Michelin star!

Braunwarth came to the “VlyFoods” team via the Berlin start-up Ökosystem. The third member, Niklas Katter, is responsible for finance and sales. He also studied at Oxford University and knows Hartmann from their student days. “The market for plant milk alternatives is growing in Germany but is highly competitive,” Hartmann emphasizes. “We are convinced that we can position ourselves in the market in the long term through the health benefits of our products.”

The three know that they will need stamina. “It took almost two years from the idea to the production of the right drinks,” Hartmann remembers. “The path from a product that was great in the lab to a product that we could also scale and sell in the supermarket was particularly difficult. There were many challenges – from large minimum quantities in production to the legal pitfalls that we had to understand.” But the entrepreneurs were supported by strong partners. “Researchers supported our work. And thanks to the service of Potsdam Transfer at the University of Potsdam, we became part of the ‘Nutri-Act’ competence cluster. The strength of the network and the openness to innovations helped us a lot.”

The three founders are ambitious: “In five years, we want to be the largest provider of dairy product alternatives in Europe,” Hartmann, who is responsible for marketing, emphasizes. “We would be particularly happy to help significantly increase the proportion of plant-based dairy products over the next few years.” The first goal, however, is to be sold in the leading supermarket chains across Germany. So far, “VlyFoods” products have been available in select supermarket branches and online.

Nicolas Hartmann studied financial economics at Oxford University and graduated with a master’s degree. He is a nutrition and business consultant.

Niklas Katter studied law and finance at Oxford University and graduated with a master’s degree. He was a business consultant at McKinsey & Company and an entrepreneur with an Amazon business.

Moritz Braunwarth studied food technology at Technische Universität Berlin (bachelor’s degree). He worked as a chef at the Grand Hotel in Tschuggen (Switzerland).