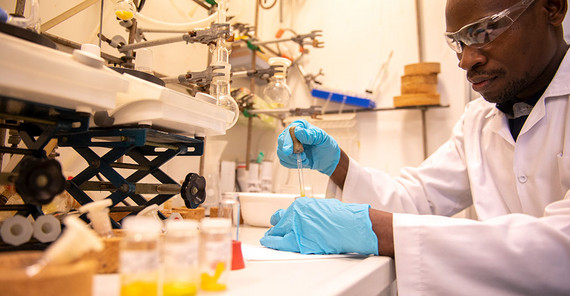 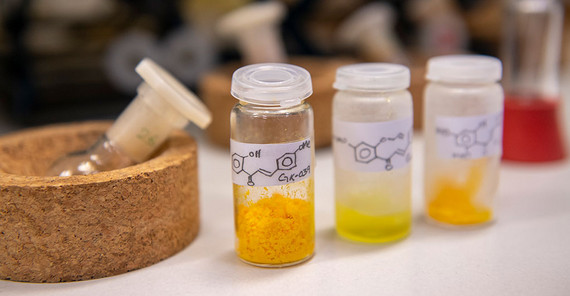 Photo : Tobias Hopfgarten
George Kwesiga at the lab
Photo : Tobias Hopfgarten
Nature provides an abundance of medically effective substances. Only a fraction of them is known so far. Especially in poorer countries, where very few people can afford expensive medicine, numerous diseases are treated with locally collected medicinal plants. Chemists from Potsdam and East Africa are jointly researching which active substances are promising and how to replicate them so that as many people as possible have access to them.

The blossoms of the coral tree erythrina sacleuxii glow in a deep orange. The tree not only looks beautiful, it also has healing properties. In East Africa, to which the coral tree is native, people use the medical properties of its leaves and roots to fight bacterial infections and malaria.

Chemist George Kwesiga has been investigating for four years how the plant’s medicinally effective molecules can be identified, isolated, and reproduced in the laboratory. The young researcher comes from Uganda and has been working in Potsdam for almost two years with a doctoral scholarship from the German Academic Exchange Service. Now he has almost succeeded. The vials at his workplace are filled with orange-yellow powders, cream-colored gels or light-yellow crystals. All of these substances are the results of the various synthesis steps that the chemist has to carry out. Ultimately, he gets a number of precious active substances that may be used in medical preparations and could help many people. From the traditional medicinal plant to a recognized medication, however, it is a long way, which Kwesiga is going together with research partners from Potsdam.

Like the coral tree, there are countless plants around the world that are mainly used locally in traditional medicine. “There is a lot of local knowledge about their healing powers,” explains Prof. Bernd Schmidt. He is one of three Potsdam chemists who channel this traditional knowledge in new directions together with cooperating African researchers. The researchers want to analyze the substance of the medical plants, synthesize them chemically and thus make them usable for significantly more people than before. To this end, the chemists have been working closely with researchers from Africa for over 20 years.

“Malaria has always been a big issue for us,” explains Dr. Matthias Heydenreich. Over the years, there have been other diseases that can be treated with herbal active substances. Substances from plants that have not yet been discovered could be very effective against cancer, diabetes, and cardiovascular diseases. The Potsdam chemists also have diseases in mind that are insignificant in the Western world. These so-called neglected tropical diseases are not very profitable for the pharmaceutical industry and so medication is lacking. Leishmaniosis - an infectious disease caused by parasites and transmitted by sand flies - is a typical example. Millions of people contract it every year, especially in the tropics. The pathogens cause skin ulcers and also severe damage to the liver, spleen, or bone marrow. Those infected often seek help from local healers who alleviate their symptoms with local plants.

Especially for diseases such as leishmaniosis, the researchers hope to achieve a breakthrough with traditional and also with new herbal active substances. First, the chemical structure of the active substances has to be identified. Nuclear magnetic resonance spectroscopy is the method of choice that expert Matthias Heydenreich uses to scan and examine all the relevant molecules in the plant. The chemists use four powerful large devices with strong magnets and a seemingly complicated device made of tubes and cannulas for this analysis. Ultimately, all samples that are fed in result in complicated two-dimensional curves, graphics with point clouds and three-dimensional patterns of mountains and valleys. Those with a keen eye and years of experience can identify from these pictures which elements occur, how the atoms are linked and which bonds exist within the molecules. The experts call it structural clarification.

It is the first step on the way from the plant to the synthesized active substance. With the synthesis, you can kill several birds with one stone. On the one hand, only very small quantities of the active substances are in the plant. In order to be able to supply many people with it, you need large quantities that can be artificially produced in the lab with the right chemical recipe. On the other hand, the substances can be chemically adjusted so that they become even more effective or can be better tolerated. That is why Prof. Heiko Möller researches the mode of action of these bioactive compounds and which proteins in the body they react with. This also includes identifying the places where the substances have an effect. Which enzymes are blocked or stimulated in the body? Where do the active substances dock and what is necessary for this process? There are many open questions that need to be answered to understand how the plant molecules work.

“Nature provides the blueprint and we analyze which structures are actually responsible for the healing powers,” Schmidt explains. His expertise is required during the last part of the process - when the structures and effective mechanisms have been uncovered and the healing substances are to be synthesized. Schmidt has an eye for the chemical work steps that are necessary to change an atomic bond here or there or to add a functional group to a specific molecule to optimize its healing power. And ultimately, it is also about producing the active substances as inexpensively as possible so that as many people as possible can benefit from them.

In African countries, people are becoming more and more aware of the value of medicinal plants and are developing an increasing aspiration to research them. “Which scientific facts can be found in traditional medicine? Which molecules and compounds are produced by the plants responsible for the effect? These questions are becoming increasingly important for local researchers,” says Schmidt. Thanks to the cooperation with Potsdam, young scientists like Kwesiga can advance their research in the well-equipped laboratories and with the know-how of the research partners. Vice versa, researchers from Potsdam regularly travel to East Africa, run workshops with students and young academics and teach important methods to strengthen the work and expertise on site.

In the world’s biodiversity hotspots - Africa, South America, and Asia - innumerable undiscovered plants and potential active substances against all kinds of diseases may still be waiting. “Some researchers estimate that about 90% of all plants are not yet known and analyzed,” Heydenreich says. So there is still a lot to do for chemists in the future. “We could work on it for 100 years and still wouldn’t have finished.”

Kwesiga is confident that he will be able to successfully complete the last synthesis step in the coming months and chemically produce one of the medically effective substances of the coral tree. He has to complete a total of ten steps before he will have completed this synthesis from various chemical precursors. There is still a problem with the last point in the working plan. “You need a lot of patience,” says Kwesiga with a smile. Anyone who sees the vials at his workplace carefully labeled with structural formulas, which testify to the work he has done so far, knows that he has a good deal of it.

Prof. Bernd Schmidt studied chemistry at RWTH Aachen University. Since 2006, he has been Professor of Organic Chemistry at the University of Potsdam.
Mail: bernd.schmidtuni-potsdamde

Dr. Matthias Heydenreich studied chemistry in Halle and Berlin and is a nuclear magnetic resonance spectroscopy expert in the working group Analytical Chemistry.

George Kwesiga studied chemistry and mathematics in Nairobi. Since 2018, the PhD student has been researching in Potsdam.

The cooperation between chemists from Potsdam and East Africa is supported by the KoUP Funding Program of the University of Potsdam expanding international partnerships and joint research projects. In addition to sub-Saharan Africa, collaborations with Argentina, Australia, Brazil, Costa Rica, France, Israel, Canada, Colombia, Poland, Russia, the United States, Italy, the Czech Republic, Hungary, and China are being promoted in 2020.